Book Review: ‘Anti-Semitism and the British Union of Fascists’ 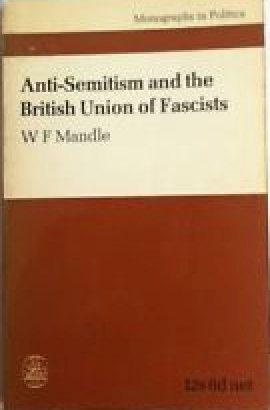 In the popular uproar over immigration it is sometimes forgotten that the term racial problem was not always synonymous with colour problem. Before the war, and for some time after it, the Jews were the racists’ favourite chopping block. They were blamed for the shortcomings of capitalism; they were subjected to the same hate, the same malicious lies, the same apocryphal horror stories, that coloured immigrants are subjected to now.

Jews were denounced as flashy and vulgar (although insidious also!); as a sexual threat; as devotees of archaic and disgusting rituals. They were supposed to be clever at despicable things and to be a threat to “Western culture” (Blackshirt, the BUF paper, had an article in December 1934 entitled “Jazz Goes With Jewry” and in January 1936 described Jews as “venereal-ridden vagrants”). These same lies are now being levelled at coloured people.

Anti-Semitism was accompanied by violence and hysteria which often was infectious. I remember a Fascist meeting at Ridley Road, in the hot summer of 1947, which jammed the streets with a frantic mob, parts of which were desperate to scream insults, and to assault anyone who took their fancy. One sweat-streaked face shouted at me that a nearby photographer “should be done up—he’s probably from the Jewish Express.” I’m sure she didn’t even know if such a paper existed.

W. F. Mandle, who has made a considerable study of Fascism, has examined the pre-war records closely to trace the course of the BUF’s anti-Semitism. At first, although it was clear they did not like Jews, the BUF did not include anti-Semitism in their propaganda; on April 1 1933, in fact, Blackshirt proclaimed that “Jew-baiting in every shape and form was forbidden by order in the British Union of Fascists before the Union had been in existence two months”. But inexorably their attitude became more hostile; it was tempered by the alliance with Rothermere in 1934 (the reason for the famous Daily Mail headline “Hurrah for the Blackshirts!”) but when the alliance collapsed the BUF became more extreme in its anti-Semitism.

In a rally at the Albert Hall in 1934 Mosley defined his organisation’s attitude and two years later he came more to the point, when he said he would be ” . . . fully entitled to take any measures necessary for the preservation of the British race.” The BUF knew what these “measures” were to be; although their official policy was deportation. Blackshirt said on 31 October 1937 that some European countries had already got rid of Jews and “it will not be long before science will find a means of eradicating this pest from England once and for all.” Mick Clarke, one of their speakers, echoed Himmler when he described Jews as “lice of the earth [who] must be exterminated”.

There is no mistaking the terrifying import of this stuff, but it won considerable support in areas which had a large Jewish population. In the 1937 LCC elections, the BUF got over 3,000 votes in Bethnal Green N.E., over 2,000 in Limehouse (Stepney) and about 2,500 in Shoreditch.

But this was the nearest they came to power. They lost a lot of their glamour when the Public Order Act of 1936 banned political uniforms in public; unemployment did not again reach the heights of 1931 and finally the war removed much of their support, helped by a government anti-racialist campaign as part of the official war propaganda.

It is, of course, an open question, what would have happened in England if events had taken a different course or had been differently timed. The danger of racism is still there; workers are still ready to vent their frustrations on a minority. Consider how closely Mandle’s description of conditions in 1931 resembles those of today:

“In that year there was developing . . . a distaste for party politics; indeed the three major parties, Labour, Liberal and Conservative were in a state of internal tension that only the Conservatives survived. There was a feeling that parties did not have the answer to deepening economic crisis. And the crisis was deepening: unemployment was rising. Britain’s credit overseas was declining and there was a frantic search for nostrums.”