Book Review – ‘The ABC of Communism’

‘The ABC of Communism’ by N. Bukharin and E. Preobrazhensky. Penguin, 8s. 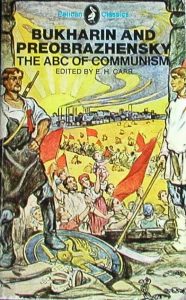 For half a century Bolshevism has been a blight on the working class movement. But recent years have seen an important tendency, especially among many young workers, not only to recognise Russia as state capitalist but also to question Bolshevik methods and the theories from which they are derived. To do this many have been going back to the classics of Marxism and Leninism and it is no accident that over the last few years several major works which have been unavailable for decades have suddenly been republished as commercial propositions. So the very fact that Penguin now find it profitable to bring out from its mothballs the ABC of Communism is significant.

Bukharin and Preobrazhensky belonged to the generation of old Bolsheviks which was systematically murdered by Stalin in the 1930s. After allying himself with Stalin against the opposition led by Trotsky and Zinoviev, Bukharin ended up as one of the defendants in the Moscow trials and was shot in 1938.  Preobrazhensky was expelled from the Bolshevik party along with Trotsky in 1927, but after ‘recanting’ he was readmitted for a short period in 1929 — only to be arrested and executed later.

Their ABC, however, was written before this (in 1920) as a commentary on the programme adopted by the eight Bolshevik party congress in March 1919. Over the next ten years it was accepted as “an elementary textbook of communist knowledge” and was published by Communist parties throughout the world.

The ABC now stands as a monument to the utopian dream of Lenin and his comrades in the early days of Soviet Russia. World socialist revolution was the order of the day — “What Marx prophesised is being fulfilled under our very eyes. The old order is collapsing. The crowns are falling from the heads of kings and emperors. Everywhere the workers are advancing towards revolution . . .” But it is more than this — it also shows that, for all its defects, their understanding of capitalism and Socialism was far more penetrating than that of their latter-day disciples. So Bukharin writes that a fundamental “characteristic of the capitalist system is the existence of wage labour” and, referring to so-called “state socialism”, that “here, likewise, there is no trace of socialism. We have state capitalism, based upon forced labour”. Contrasted to this is “proletarian communism (or proletarian socialism)” — “a huge co-operative commonwealth”. “The communist method of production presupposes  . . . that production is not for the market, but for use”: ” . . . we no longer have commodities, but only products”.

It is also interesting to note that while most would-be Bolsheviks now talk in terms of ‘generations’ before the wages system could be abolished in Socialism, Bukharin — even though he was influenced by Russia’s industrial backwardness and low level of production — merely writes that:

At first, doubtless, and perhaps for twenty or thirty years, it will be necessary to have various regulations. Maybe certain products will only be supplied to those persons who have a special entry in their work-book or on their work-card. Subsequently, when communist society has been consolidated and fully developed, no such regulations will be needed.

So we can warmly recommend the ABC of Communism as required reading for all sub-species of neo-Bolshevik. Although it contains numerous theoretical errors, it should introduce many of them to certain basic socialist ideas — which they have certainly shown no signs of being familiar with up till now.