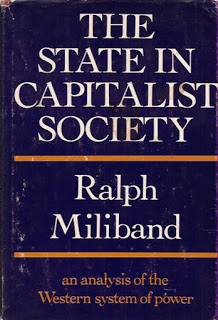 The State in Capitalist Society, by Ralph Miliband. Weidenfeld and Nicolson, 45s.

This is a confusing book in which Miliband sets out to prove what he takes to be the Marxist theory of the state. Although he does define his terms he uses words like ‘capitalism’ and ‘class’ in a non-Marxist way. Capitalism, he holds, is based on private enterprise, private profit and private accumulation. This raises suspicions, which are confirmed, that he has an odd view of Socialism too. Russia, he says, is ‘collectivist’, ‘non-capitalist’ and, in an unguarded moment, even ‘socialist’. The concept of state capitalism is clearly unintelligible to him and is nowhere discussed, not even in relation to nationalisation in the West.

Classes are distinguished by how they stand in relation to the control and use of the means for producing wealth. In modern society there are two main classes: the non-working owning class and the non-owning working class. Miliband, however, has all sorts of gradations including an upper middle class. For him the working class are just those who work in the factories, mills, mines, railways, docks, and shipyards. Although he recognises that white-collar workers suffer much the same conditions as blue-collar workers, he still refuses to include them in the working class.

Thus for Miliband, unlike Marx, class is defined in terms of style of life and ideas, a point which does not help when he tries to explain the Marxist theory of the state:

“In the Marxist scheme, the ‘ruling class’ of capitalist society is that class which owns and controls the means of production and which is able, by virtue of the economic power thus conferred upon it, to use the state as its instrument for the domination of society.”

Certainly, this has a long history as the alleged Marxist view. For instance, a Communist Party study course of the 1930s said “each country is ruled by a small group of very rich men whose wealth gives them the power to control the government of the country” and claimed that “Marx pointed out that the class which had economic power controlled political power”. This view, however, goes further back than this, to the industrial unionists of before the first world war. It is not difficult to see its attractions to those who argued that the ‘bourgeois state’ ought to be smashed (the Communists) or by-passed (the syndicalists).

Marx, however, did not say that the state should be smashed or by-passed, but that it should be captured by the working class. The state, as the public power of coercion, was an instrument of class rule which came into being with the division of society into conflicting classes and which has been controlled by various classes through its history: ancient slave-owners, feudal barons, and modern capitalists. To say that a class controls the state because it has economic power is to fall for a crude economic determinism. The state is controlled by the class that has waged and won a political struggle to capture it. It is true that the class which is economically progressive has generally been able in the end to win state power, but because of its political struggle rather than its economic position. This is why it is possible for an economically redundant class (like the modern capitalists) to retain power long after it has become redundant. The capitalist class rules today not because of its economic position (as a superfluous class, after all!) but because of its political and ideological leadership of the working class. In fact the Marxist view is the reverse of Miliband’s: the capitalist class is wealthy today because it has political power. It retains its economic privileges only because it controls the state. And it controls the state only with the support of the workers. Miliband argues that the top posts in the organs of the state—the government, parliament, the law courts, the civil service, and the armed forces—are filled by people who come from the same social background and who are all firmly committed to capitalism, thus forming (in his non-Marxist use of the word) a class. As the same class dominates the state as that which dominates industry, he adds, we can say the capitalist class is the ruling class.

In the Marxist scheme, however, the ruling class is the class that controls the state in the sense of its being used to maintain its economic privileges. It is a political rather than a social concept. To find out which class rules you study how the state is used rather than who fills the top posts.

We do not doubt that top civil servants and judges and generals are themselves mainly from wealthy families or that they are firmly committed to capitalism. But then, on this last point, so are those who fill the bottom posts in the state machine and so are most other workers. If you have a correct theory of class, you realise that by and large both industry and the state are run from top to bottom by members of the working class (including Miliband’s middle class), men and women who are dependant on their wage or salary to live. No doubt there are capitalists who do some of these jobs, but the socialist case has always been that, economically and politically, the capitalist class as a class is redundant as society is already run by the workers alone.

To repeat, the capitalists control the state not by filling the top posts with their relations but by winning working class support for the policy of using the state to maintain capitalism. Even if the top posts were all filled by the children of manual workers, with provincial accents, the capitalists would still rule if the state was used in their interests. It is not a question of the social background of the state officials, but of the purpose for which the state is used.

The theory that the capitalists control the state through a sort of nepotism and freemasonry leads to dangerous conclusions such as that parliament is only a facade and that fascism can be unleashed at will. “When things grow really serious”, said the Communist Party study course, “the capitalist class arbitrarily does away with the more democratic organisations of the state, and relies increasingly on sheer armed force”. Oddly enough, in discussing this view, Miliband makes the point we have made for years:

“This is a possible scenario. But reflection suggests that whatever dominant classes, economic elites and conservative forces in general may wish, such a moment is one of the least likely to make this kind of response viable. For by the time a socialist movement has reached such a commanding position, which means, in the conditions of advanced capitalism, that it has become a vast popular movement, extending well beyond the working classes, it may be too late for the forces of conservatism to take up the authoritarian option with any real chance of success” (His emphasis).

Socialism can only be set up when a majority of workers want and understand it and organise democratically to win political power and use it to abolish private property in the means of production. This done, there is no longer any need for a public power of coercion.