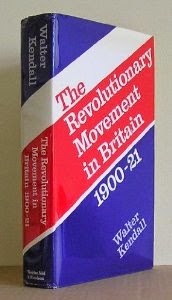 Who could write a book about those who said they were Marxists in the period 1900 to 1921 and only mention the Socialist Party of Great Britain once, and that in a couple of footnotes? Answer: almost any Labour historian. We have commented before on the bias of such people, and Walter Kendall is well in this tradition. The SPGB, according to him “unwilling to enter the political fray even to the extent of adopting a programme of ‘palliatives’ retained its political virginity only at the cost of failing to reproduce anything at all”.

We have met Kendall’s type before (indeed we have met Kendall); his pro-Labour bias comes through everywhere. Labour is “the mass party of the working class”. Those in the early Communist Party who supported its affiliation to the Labour Party were “essentially activist and involved” while their opponents were, of course, “notably propagandist, passivist, and detached”. Kendall’s own illusions also through in his criticism of Hyndman’s Social Democratic Federation for not trying “to assume the leadership of working class struggles once they were under way”.

We have no doubt about accusing Kendall of deliberately ignoring the SPGB’s active existence in this period out of blatant political bias. After all, what else explains his praise of the Socialist Labour Party’s journal for having “the highest level of Marxist literature in Great Britain” without a mention of the SOCIALIST STANDARD or the SPGB? We do not necessarily want the superlatives; we only want some recognition! In any event, Kendall is not in any position to judge which journal had the highest Marxist discussion since he obviously did not bother to read the SOCIALIST STANDARD—otherwise he would have known that E. J. B. Allen, the syndicalist, was once in the SPGB. Mind you, it is Kendall who loses by ignoring this obvious source of material for his book. He misses, for instance, a scoop about Litvinov’s statement to the conference of ‘Allied Socialists’ in February 1915. Litvinov was the Bolshevik representative in Britain and was barred from reading his anti-war statement to the conference. Kendall refers his readers to journals published in France and Switzerland for the text. We have a better suggestion: look up the SOCIALIST STANDARD of March 1915.

During this period, the SPGB exposed syndicalism and industrial unionism, opposed the first world war from the start and foresaw that the Bolshevik coup could not have led to Socialism. All these are matters central to Kendall’s theme but he prefers to search around for someone else to give the credit to. He comes up with John Maclean of Glasgow. Only Maclean and his followers, says Kendall in a passage he knows to be untrue, raised the socialist revolution as an alternative to the war. The SPGB (who must have numbered more than Maclean and his followers) consistently opposed the war on socialist grounds. Maclean was a member of the British Socialist Party (the successor of the SDF) which like the ILP and even the SLP, was split over its attitude to the war. The depth of his ‘Socialism; can be judged by his support for Scottish separatism and the formation before he died in 1923 of a Scottish Workers’ Republican Party. Maclean never joined the Communist Party and it is this, in view of the current unpopularity on ‘the Left’ of Russia, which makes him attractive to people like Kendall.

To be fair, Kendall makes one or two good points: that the SDF played a useful role in introducing Marxist ideas into Britain; that the CPGB was an artificial creation sustained only by Russian gold; that the Comintern put the clock back for the workers’ movement in the rest of Europe. But even here Kendall’s bias gets the better of him. He accuses the Communist Party of playing a major role in destroying the whole of the pre-1917 revolutionary tradition in Britain. Wrong again! The SPGB has been in continuous existence since 1904, a constant source of embarrassment to the Communists’ bid to palm off their views as Marxism—and of course to the likes of Walter Kendall.