How Not To Do It 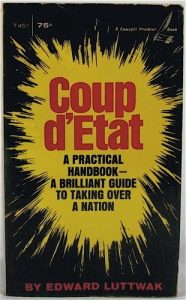 Edward Luttwak is deliberately deadpan about this book. His aim, he says, is to produce something along the same lines as a cookery book which will enable “any layman equipped with enthusiasm—and the right ingredients—to carry out his own coup . . . if, as a result of this book, a greater number of people learn how to carry them out this is merely a step towards democratization of the coup—a fact that all persons of liberal sentiments should applaud.”

In fact, the work is a good deal better than his introduction suggests. Although the second half is largely given to a study of the actual mechanics of the coup and the military strategy needed to make it a success, the earlier sections are an absorbing study of the factors which make a coup d’état possible. Much of this is of indirect interest to socialists.

Fortunately, Luttwak does not ruin his analysis by confusing the coup with social revolution. He goes out of his way to stress that the coup is “a seizure of power within the present system”. He also recognises that the essential pre-condition for the coup d’état is economic backwardness and the mass political indifference which results from it. Thus, while the December coup in Brazil succeeded because of the lack of political involvement of the mass of peasants and workers, in an advanced industrial country such a seizure of power could only be permanent if it were accepted by the working class. To illustrate this, Luttwak refers to the Gaullist coup of May 1958 in France, which was successful for this reason, and to the parallel attempt by Generals Challe, Salan and others in April 1961. The latter was aborted by the massive resistance of the workers in France.

In the world today every country is to a greater or lesser extent capitalist, having to trim its economy to the world markets—but only in the advanced areas is this achieved thanks to the working class. In the bulk of what is called the “third world” capitalist economies are being developed without any involvement by the mass of the people; except, of course, as beasts of burden—as producers of surplus product. Luttwak has noticed one symptom of this—the fact that, since almost any form of political awareness is confined to a small fraction of the population, the coup d’état comes into its own. On the other hand, in industrialised areas capitalism is maintained precisely because the working class accepts it as the only possible way of running society and uses its votes to express this conviction.

The implication of this for working class intent on capturing political power go deeper than merely exposing the irrelevance of the coup d’état as a strategy for socialists. It means that before socialism can be established the majority of workers must be committed to setting up a new form of society and must have a clear idea of what this involves.