What’s right? What’s wrong? At some periods in history these questions called forth firm, confident, even unanimous replies. Today there is a lot of uncertainty about even the most basic moral ideas. These two concise and useful books help us to understand why. 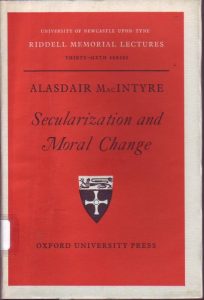 ‘Secularisation and Moral Change’ begins by quoting Engels’ prediction that the working-class, mainly indifferent to religion but still vaguely respecting it, would abandon even the remnants of belief and become solidly atheistic. MacIntyre has no difficulty in backing up his view that this prediction has not yet been fulfilled to any great extent. “The English working-class today is on the whole not strikingly more secularised than it was” when Engels wrote. A great deal of de-Christianising had taken place prior to Engels’ observations, and this MacIntyre correctly identifies as due to “the destruction of the older forms of community, in many cases rapidly, and in particular the destruction of those features of them to which religion had given symbolic expression.”

The development of capitalism and the cities gave rise in ethical theory to the dominance of the “secondary virtues”—virtues (like fair play, tolerance, a gift for compromise) which are only indirectly related to human ends. The view that “moral decline” is a result of Christian decline is false:

“It is not the case that men first stopped believing in God and in the authority of the church, and then subsequently started behaving differently. It seems clear that men first of all lost any overall social agreement as to the right ways to live together, and so ceased to be able to make sense of any claims to moral authority. Social change and with it moral change is chronologically prior to the loss of belief effected by intellectual argument, except where a very small minority are concerned.”

Today the spread of atheism is inexorable, but much slower (in Britain) than Engels expected. It is significant that the churches have a particular hold on people through christenings, weddings and funerals. Birth, love and death were in former times “explained” by the Church. Today this explanation is like the salt which has lost its savour, but no new system of attitudes and rituals has arisen to replace it. This is not surprising. The atomisation and shattering of community (and the education) which result from capitalism forbid the existence of any widely-accepted and consistent view of the world in terms of human values. Hence, the staying- power of Christianity MacIntyre attributes to the lack of any alternative.

The churches are trapped between introversion and assimilation, between escape and dilution. On the one hand there is what MacIntyre calls “enclave Christianity,” which will “provide a retreat from the conditions of urban secular life, and contribute nothing to urban secular life.” The other pole is that Christianity itself becomes secularised. Modern religious leaders, would love a theology of the secular, but all they have is a secular theology.

And MacIntyre makes short work of milk-and-watery Woolwich-type modernism. He points out that it is meaningful to say “Obey the spirit, not the letter of the law” only when there is a letter of the law. It is pointless to advocate a morality in which rules have been replaced by a principle of intent such as “love”, because when denied reference to specific prescribed courses of action, these labels are emptied of meaning. There can be no morality without rules. 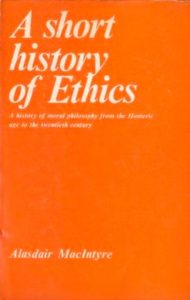 MacIntyre argues clearly and rationally, and his analysis is firmly in the Marxist tradition. One grumble: he clings to the myth that there is a modern middle class. A Short History of Ethics is a more comprehensive work: not so much a sketch, more a standard textbook. It gives a fair outline of developments in moral thinking, a clear criticism, plus some very interesting observations on the relationship of morals to social change.

MacIntyre never forgets the historical and social aspects of ethics. Neither does he fall into the opposite trap of some lazy-minded “Marxists,” who delight in the unscientific game of finding a one- to-one correspondence between economic events and ideas, or who point out that such-and-such a viewpoint is in the interests of such-and-such a class, and think that this frees them from the need to evaluate that viewpoint logically.

He attacks the view of the field of moral philosophy as “the language of morals” pointing to the untranslatability of the chief moral terms of Ancient Greece. In a harmonious society virtue and happiness are closely linked concepts, but in a society like modern capitalism these concepts are independent, even antagonistic. So we get a division of opinion into those who advocate personal advancement and those who favour moral goodness. “Gather ye rosebuds while ye may” versus “Let justice be done though the heavens crumble.”

In England the rise of individualism meant:

“That all the links between duty and happiness were gradually broken. The consequence was a redefinition of the moral terms. Happiness is no longer defined in terms of satisfactions which are understood in the light of the criteria governing a form of social life; it is defined in terms of individual psychology. Since such a psychology does not yet exist, it has to be invented. Hence the whole apparatus of appetites, passions, inclinations, principles, which is found in every 18th century moral philosopher.”

MacIntyre apparently thinks that lack of consideration of the role of morals in the socialist revolution is a gap in Marx’s theory, but he points out:

“Marx resembles Hegel and the English idealists in seeing a communal framework as presupposed by morality; unlike them, he sees that it no longer exists; and he proceeds to characterise the whole situation as one in which moralizing can no longer play a genuine role in settling social differences. It can only be an attempt to invoke an authority which no longer exists and to mask the sanctions of social coercion.”