For those who have yet to take an annual holiday there are two books that will slip easily into the haversack, the saddle bag, the pannier bag, the suitcase or the pocket, and which are well worth reading. Both of them were written a few years ago but in their more expensive editions they have probably not found their way onto working class bookshelves. Now they are available in the comparatively cheap “Penguin” series. 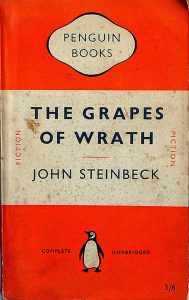 The first is ‘The Grapes of Wrath’ by John Steinbeck, first published in 1939. This is a story that has as its theme the proletarianising of the small farmers of Oklahoma and other central states of the U.S.A., and their early experiences as wage workers. Turned off their small holdings by the finance and large farming corporations who intended to introduce the more profitable mechanical farming methods, these poverty stricken families trek all the way to California where they are led to believe there is a fertile land and comfortable living. There is fertile land alright, but not for them. The ingenuity of man has devised fertilisers, pest destroyers, grafting and selective breeding of the many varieties of fruit grown in California. The crops are so bountiful that the market price is lower than the cost of picking and the fruit is allowed to rot. Into this state comes the army of newly created wage workers bewildered by the land of plenty in which they watch their children starve. Capital has them in its clutches. It breaks up the families, it makes men unscrupulous and unsociable, it drives them all into a cut-throat low wage competition. The poverty is extreme; and the period is the 1930’s.

Steinbeck tells of all this through the medium of the adventures of the Joad family—Grandpa and Grandma, Pa and Ma, Noah, Tom, Winfield, Al, Ruth and Rosasharn together with Rosasharn’s husband, Connie and a wandering preacher, Casy. Steinbeck is a story teller of the first order. he can bring a lump to the throat or a smile to the lips in the space of a page. The book has a social significance and is wonderfully well done and the author, at the end of his story, delivers the reader a resounding kick in the belly that will make him remember it for years to come. 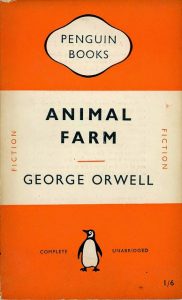 The second book is George Orwell’s ‘Animal Farm’. This is a good and amusing satire on the process that has taken place in Russia since 1917 up to the time of writing, 1945. Orwell portrays the 1917 Revolution by a rebellion of the animals on a farm in which they turn out the human owner and take over the farm themselves. The pigs take on the leadership of the new order and the old boar, Comrade Napoleon, by astute manoeuvring called “tactics” becomes the great chief. The process of hoodwinking the working animals whilst steering the rebellion away from its original course until the animals are dumbfounded to find that they are working harder and are poorer fed than in pre-rebellion days and that in all other respects the system is the same as ever, is well described.

“Comrade Napoleon” is, of course, a caricature of Stalin, whilst ex-comrade Snowball, represents Trotsky. Other characters are easily identified. There is the horse, Boxer, who has a cure for all problems by working harder and whose motto is “Comrade Napoleon is always right.” He finally works himself to a weak and useless condition, and the pigs send him off to the knacker’s yard.

In the space of a couple of hours reading, George Orwell has described by his satire what other writers have failed to describe as adequately in hundreds of stodgy pages. His animal characters are often wise but funny, instance the donkey, Benjamin, who has lived for many years and who, when told that God had given him his tail to whisk away the flies, replied that he could well do without the tail and the flies. Good for the holiday, both of them. Just as good if you have had the holiday or even if you do not get one.