We call it the M.C.H., familiarly, and easily, because it does not seem such a mouthful as the Materialist Conception of History. Now the M.C.H. presents a difficulty to Mr. F. W. Wood, who writes us from Hackney, a difficulty of a quite peculiar kind. He asks us to publish his letter, and for the benefit of himself and numerous friends, requests our reply. We regret his letter is too diffuse to publish in its entirety, but his point can quite fairly be condensed into a short statement. Here follows the condensation. Mr. Wood has been a supporter of the Socialist Party for years. He thinks he can now claim he has a clear insight into the position of the S.P.G.B. With an unfortunate exception. It is this: He accepts the Materialist Conception of History in its entirety. He is a materialist first, last and all the time. But he finds he has to apply his “materialism” to capitalist society. He further finds that the working class at present seem determined to try the Labour and Communist route to the Promised Land, rather than ours. He agrees, the condition of the working class will get steadily worse, but deplores that the time when they will be compelled to take revolutionary action is inconceivably remote. This brings him to his main point. “If Socialism is still in the dim future, why should I spend time, money and energy in propagating and expounding Socialism, when I sincerely think I will never survive to see that new social order.” Mr. Wood asks for a reply “free from vindictiveness,” and not making a butt of him. He shall have it, though we are mildly curious as to why he should make such an observation. Does our journal strike anyone as vindictive? Perish the thought. Honest expression of opinion, and integrity of thought and motive, have nothing to fear but similar qualities from ourselves.

However, to get back to the difficulty. May we suggest, without vindictiveness of course, that our correspondent is a little at sea with his terms. He is a materialist, he says. What does that word mean, precisely? We have found it mean different things to different people. It is often used as a synonym for selfishness. It is often given a sinister twist by ‘being coupled with “grossly”—grossly materialist. It is sometimes applied to a plain, matter-of-fact individual who responds to no sentimental or idealist appeals. But these are all colloquial meanings. In philosophy it has a fairly definite meaning, but as Mr. Wood is not concerning himself with philosophy, that need not detain us. But a materialist in any of these senses need not necessarily subscribe to the M.C.H. We think it reasonably certain that Mr. Wood is using the term in the anti-sentimental sense, for he says, why should he give his time, money and energy to educating an unresponsive, inert, working class. There is only one reason, friend, and it is this: You will 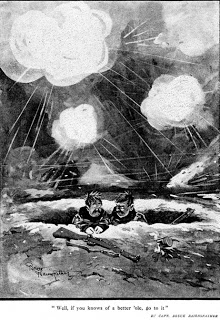 remember the famous cartoon depicting Ole Bill in a shellhole, up to his armpits in water, and the comforting remark of his pal in an adjoining shell-hole, “If you know of a better ’ole, go to it.” The workers are up to their armpits in the slough of capitalism. We, who can see an inch or two farther than our fellows, tell them how they got into the mess, and how to get out of it. We show that they can only get out of it by united action, as a class. Here and there an individual may climb out by his own exertions, usually on the backs of his fellows, but for the working class to climb out by all becoming capitalists, is obviously absurd. If any individual thinks it a waste of time to urge his fellows to free themselves from slavery, knowing that his own freedom is bound up with theirs, he is quite at liberty to resign himself to his fate, and explain the matter to himself under any heading he pleases. Why not become a capitalist? If the workers won’t move on their own behalf, climb on their backs. But remember there is only limited room. Every rich man means so many thousand poor. You can have a flock of sheep and one tiger, but you cannot have a flock of tigers and one sheep.

Let us hasten to assure Mr. Wood that we are not abstaining from becoming capitalists for purely sentimental reasons. If he can tell us of a fairly expeditious way— (we are past our first youth)—of taking our place with the captains of industry, we shall be delighted to hear of it. But, as a “materialist,” surely he does not ask us to believe he is deliberately avoiding the pleasure of becoming a capitalist, whilst he sacrifices himself in the service of his fellow worker’s enlightenment. Is it not rather the clear recognition that we, the working class, will never be anything else that irresistibly compels us to revolt.

We make that revolt intelligently and consciously, knowing the futility of any other course. We realise we can only revolt as a class, and we must organise as a class. We took the first steps by joining and organising a party to represent the aspirations of our class. If our fellows are dull, or deaf, they are damned, and so are we. We cannot rise without them.

One final word on the M.C.H. A materialist need not necessarily support the Materialist Conception of History. Quite often the contrary. Although at first sight a cumbrous title, it really stands for a very simple thing. History is the written record of the doings of mankind in the past. Thousands read it, few study it. Of the students some think they discern some driving motive or source of action that has driven society through its successive stages, to the present blissful epoch. Some would ascribe the major credit to the work of the Church, others to the wisdom of kings, some to the ability of statesmen, others to a succession of heroes and great men. The M.C.H., however, the supreme work of the genius of Marx and Engels, says that there is something greater than all these. The superstructure of society, it says; its laws and institutions are fundamentally based on the material conditions in that society. As Mr. Wood says, he has read the Socialist Standard for years, he will readily recollect frequent articles on the subject, several quite recently, so there is no need to go over the ground again. Let him get away from the “superior person” attitude and the viewing of the working class as some entity which does not include ourselves. We are in it; we are of it; we are the working class. The only individual question we should permit ourselves is, “What am I doing about it?’’