Letters: Must We Convert The Majority? 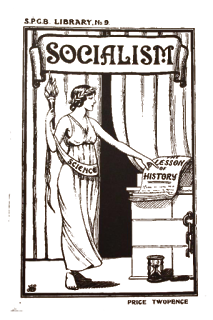 A Criticism and Our Reply

I have read your pamphlet “Socialism” with interest and, although I agree wholeheartedly with your analysis of capitalism, I would like to offer a criticism of your theory of the method of bringing about the new society. You state on page 43 “The first essential then, of having a vote of revolutionary quality is to have a working class that thoroughly understands its position in society.” Undoubtedly, if we could get a majority of voters at a General Election who thoroughly understood their position in society and voted solely for Socialism, all would be well. But it’s the if. May I here give you a quotation which has a bearing on my point. The first is from G. B. Shaw, who says, ” I remember , when I was busy, as an unpaid and quite sincere Socialist agitator in this country .  .    . one of the things that puzzled me at first was that I met with so little opposition. I found that I was almost like a clergyman talking pious platitudes. Nobody objected. ; Nothing happened. I apparently carried my audiences enthusiastically with me. Nevertheless, capitalism went on just the same. I began to understand that the leaders of Socialism, the men with the requisite brains and political comprehension, must not wait as Kautsky would have them wait, on the plea that you must do nothing until you have converted the people and can win a bloodless victory through the ballot-box. The people seldom know what they want, and never know how to get it.” The next is from “Psychoanalysis,” by André Tridon “The real enemies of progress have always been the enormous sluggish masses of the people without imagination, suffering from neophobia, the fear of new things. Such people only move when the changes in their normal environment become so great as to be intolerable, and goad them to action. Then they move, as bullocks move before the stockman’s whip. There are many indications that changes in the environment which will lead to such movement are rapidly approaching; we may expect, in consequence of the tendencies inherent in capitalism, an enormous increase in the mass of active discontent at no distant date. The. discontented man is the hope of the world.”

These two quotations sum up my objection to your method of achieving Socialism, not that I would rather a class-conscious majority voted a real Socialist Party to power, but our desires must not blind us to things as they are. The capitalist class control the sources of education, the Press, etc., the progress of real socialist education is so slow and withal we have the fact that capitalism is in a state of decline forcing large masses on to the unemployed scrap heap, lowering wages and hence, strikes and discontent everywhere. The question is, can a minority of educated men (in the event of a collapse of the ruling powers through another great war, for instance) lead the discontented and chaotic elements of the working class to institute a new authority after the Russian plan?

We know that Lenin had to compromise with the peasantry, and that State Capitalism is practically the system now in Russia, despite the C.P.G.B. assertions to the contrary. Yet I think you will agree that Lenin was justified in seizing “The Psychological moment” and instituting a dictatorship where a new and differently educated people will grow up who will set about moulding a Socialist State. I hope you will deal with this letter in the Socialist Standard.

If Mr. Brough agrees with the analysis of capitalism presented in our pamphlet, he will agree that the central fact revealed by that analysis is the existence of a class struggle. We claim that our method is the only one consistent with that fact, and our correspondent has failed to indicate a logical alternative.

A new system of society can only result from the operation of forces already existing in the present one. It can arise only from a change in the relationship between the producers and the means of production, i.e., the emancipation of the working-class by the conversion of the means of production, etc., into common property. This emancipation being opposed to the interests of the present ruling class (the capitalist proprietors) will, naturally, be resisted by them as long as they possess the means of resistance. The most important of these means is the political machinery (including the armed forces of the nation) hence the necessity for its capture by the working-class.

Mr. Brough suggests, on the analogy of what happened in Russia in 1917, that a minority of educated men can lead a discontented but chaotic mass of workers to establish a similar dictatorship. He assumes, however, as a necessary condition, “a collapse of the ruling powers through another great war, for instance.” The folly of basing the methods of a political party upon mere assumptions is strikingly illustrated by the history of Russian “Communism” since the date mentioned.

The Bolsheviks assumed that a world upheaval on the part of the workers was impending at the time they took action. Misled by this assumption, they took up a position in advance of the class upon which they depended for support, with the result that their position rapidly became untenable and had to be abandoned. Even Mr. Brough will agree that they failed to establish a new system of society.

On the contrary, they set free the middle- class or bourgeois element in Russia from the last relics of feudalism. They cleared the way for further capitalist development.

The collapse of the Tsarist administration under the strain of a world war was the result of the exhaustion of its resources due to antiquated methods of exploiting the workers. The Bolsheviks are substituting more up-to-date ones. Hence our lack of enthusiasm for the “good intentions” with which they commenced their administrative career.

The question as to whether they can be successfully imitated is one which becomes more and more an academic point as the excitement aroused by their example dies away. This much, however, is obvious, that the ruling powers of this country having taken care to organise the workers politically in their support, by means of the franchise, are not likely to meet with a debacle on the Russian model. Their methods of dealing with would-be “leaders” of the discontented workers does not encourage us to believe that they would readily succumb even under such circumstances as those assumed by Mr. Brough. They are not afraid, for example, to allow “safe” leaders to assume nominal control of the political machinery.

What Mr. Brough overlooks is that political power is only controllable by a class organised for that purpose. When the Bolsheviks, for example, discovered their fatal mistake, they had no alternative but to fall back upon the support of the very bureaucracy, intelligentsia and petit bourgeois which they had aspired to dislodge; and, in the unlikely event of an analogous occurrence in Britain a similar result would follow. Finding that the workers as a class were not prepared to assert themselves, the capitalist class would resist the upstart minority and compel it to come to terms.

In the meantime the Socialist Party acts in accordance with existing circumstances. While the “Communists” and people like Mr. Brough scan the horizon anxiously for signs of an imaginary “revolutionary situation,” we proceed with our educational work knowing that the changes taking place in our environment are with us. It is significant that neither of our correspondent’s quotations help his case. Despite Mr. Shaw’s distrust of “a bloodless victory through the ballot-box,” the Fabian Society have not, so far, attempted anything else! Tridon’s remarks, on the other hand, indicate a conviction that the “masses” will move, but do not answer the question “what shape will the movement take?”

Mr. Brough says, “our desires must not blind us to things as they are!” Yet in his desire to have something done quickly he is prepared to blind himself to the fact that experience is a relentless educative force and, strange though it may seem, a more powerful one than even the capitalist press.