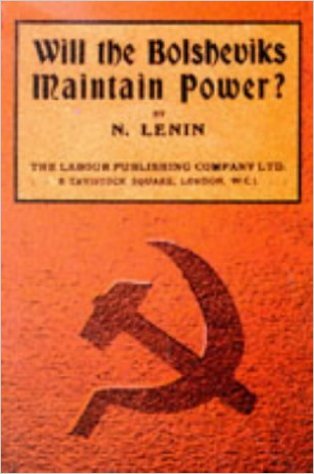 The above is an article written by Lenin in October, 1917, in answer to the claim of the opponents of Bolshevism that the Bolsheviks “would not attempt to take complete power on their own initiative.”

Though written so long ago, this appears to be its first publication in English. Lenin’s reply rebuts the claims of his opponents, in his usual vigorous fashion, and the fact that five years later the Bolsheviks are still ruling in Russia justifies the position he then took up.

In this article, Lenin makes the claim, often repeated afterwards, but now definitely refuted by the publication of the Russian Soviet Constitution, that the Soviet system is superior to the political system in the Western world:–

“In comparison with bourgeois parliamentarism it is a step forward in  the development of democracy which has a historical world significance” – P. 43 (Italics ours.)

The absurdity of this claim has been fully exposed in the Socialist Standard, July, 1920; while deference to democracy is now treated by the Bolsheviks and their supporters as “an out-of-date shibboleth”, “a bourgeois notion”, etc.

Another piece of evidence supplied by the article is on the view held by Lenin and his party at the time of the Revolution, that the workers of the Western world were practically ready for the social Revolution. On page 101 he says:–

“It [the Russian Revolution] will conquer the whole world, for in all countries the Socialist transformation is ripening.”

It is our great regret that even now, let alone then, the mass of the workers are so far from the mental development necessary for the Socialist Revolution.