Myanmar and the myth of ‘the national progressive bourgeoisie’ 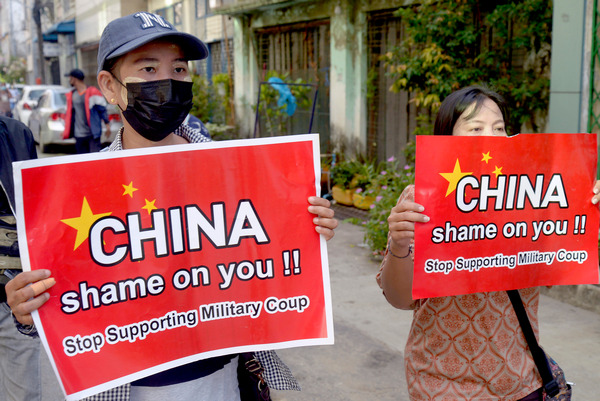 China has financial interests in Myanmar and is demanding their economic zones be secured from the military conflict. For this, China had to maintain diplomatic relations with the current military junta, but is still supplying weapons to the ethnic armed groups that are fighting against the junta. China is also demanding to meet with Aung San Suu Kyi for political discussion. So, it can be concluded that China hasn’t chosen a side so far. However, since China is only interested in its imperial power and economic advantage, the conclusion can be drawn that it will bet on the winning horse in the future.

Russia, on the other hand, has chosen its side. Long before the coup, Russia had been a steady supplier of weapons and maintained a stable relationship with the Myanmar military. Russia still exists as the sole steady weapons supplier for the military junta even during the coup and revolution era. The Moscow leadership also welcomed Min Aung Hlaing, the military junta leader, and some ultranationalist monks to Russia even after the coup. In September, General Min Aung Hlaing and Putin confirmed their strategic alliance at the Moscow-organised Eastern Economic Forum. Since Russia’s imperialism has chosen to support the reactionary military regime, the anti-imperialist idiot Stalinists who are only opposed to Western imperialism are currently facing backlashes from the working class and the public.

Theoretically, the young Mao Zedong was for federalism, according to his article in Ta Kung Pao. However, hypocritically, the authoritarian Mao Zedong in power rejected the self-determination of Tibet, Mongolia, and some other provinces. The hostility to federalism by Myanmar’s military junta is in fact rooted in the anti-federal arguments of Stalin in the first place. Therefore, advocating for federalism while maintaining ‘Marxism-Leninism-Maoism’ as a revolutionary tactic is irrational at its core and opportunistic. Such opportunism can be found in the Communist Party of Burma and its military wing, the People’s Liberation Army.

Since the Communist Party of Burma is mainly influenced by Mao Zedong’s thoughts, they still buy into the idea of a revolutionary national bourgeoisie. In an article Mao Zedong wrote the following:

‘The national bourgeoisie is a class which is politically very weak and vacillating. But the majority of its members may either join the people’s democratic revolution or take a neutral stand, because they too are persecuted and fettered by imperialism, feudalism and bureaucrat-capitalism’.

Karl Marx, in contrast to Mao Zedong and his revisionism, introduced the principles of perpetual revolution in his 1850 letter ‘Address of the Central Committee to the Communist League,’ written in the course of the abortive German bourgeois-democratic revolution:

‘While the democratic petty bourgeois want to bring the revolution to an end as quickly as possible, achieving at most the aims already mentioned, it is our interest and our task to make the revolution permanent until all the more or less propertied classes have been driven from their ruling positions, until the proletariat has conquered state power and until the association of the proletarians has progressed sufficiently far – not only in one country but in all the leading countries of the world – that competition between the proletarians of these countries ceases and at least the decisive forces of production are concentrated in the hands of the workers’.

In other words, Marx was advocating a revolutionary method in which the working class must maintain and defend the democratic revolution as much as they can until state power has been seized. In contrast, Mao Zedong substituted the class struggle with his ‘new democracy’ concept, which is revisionist at its core. Mao Zedong’s new democracy states that the political revolutionary alliance between the working class, the peasants, the intellectuals, and the national bourgeoisie should be accomplished and protected at all cost. Here, Mao Zedong even distinguished the national bourgeoisie into two camps. According to his article ‘On the Question of the National Bourgeois and the Enlightened Gentry’:

Nevertheless, Karl Marx had warned that a kind of political sabotage could be potentially done by the petty bourgeoisie in his letter ‘Address of the Central Committee to the Communist League’. They, Marx wrote:

‘seek to ensnare the workers in a party organisation in which general social-democratic phrases prevail while their interests are kept hidden behind, and in which, for the sake of preserving the peace, the specific demands of the proletariat may not be presented. Such a unity would be to their advantage alone and to the complete disadvantage of the proletariat’.

Instead of maintaining this socialist tradition of class struggle, a revisionist party, the Communist Party of Burma, betrays the class war by forming an alliance with the national bourgeoisie.

Next article: Cooking the Books 2 – Profits, profits, and profits ⮞