This column talked some time ago about food banks and the regular request that goes out on my local community Facebook page for contributions to the food bank near to where I live. As rising prices make the struggle to survive even more desperate for many people, the food bank request itself has taken on a more desperate tone. The latest message said:

Many of our neighbours can’t feed their children. They arrive here in tears. So please this week we are requesting in particular:

Also if anyone can spare any toiletries.

Thank you lovely people, please try to help this much needed Foodbank

What to do? The anthropologist Margaret Mead was asked by a student what she considered to be the first sign of civilisation in a culture. The student expected Mead to talk about fishhooks or clay pots or grinding stones. But instead, Mead said that the first sign of civilisation in an ancient culture was a femur (thighbone) that had been broken and then healed. Mead explained that in the animal kingdom, if you break your leg, you die. You cannot run from danger, get to the river for a drink or hunt for food. You are meat for prowling beasts. No animal survives a broken leg long enough for the bone to heal. A broken femur that has healed is evidence that someone has taken time to stay with the one who fell, has bound up the wound, has carried the person to safety and has tended the person through recovery.

And the fact that day after day, week after week, people keep the local food bank stocked up helping others through difficulty is a clear indication of ‘civilisation’ and that we humans will usually help others in a worse situation than ourselves if we can, if only because it makes us feel better about ourselves . Indeed Mead finished her explanation with the words: ‘We are at our best when we serve others.’ 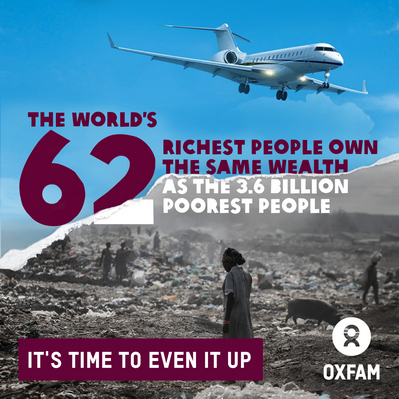 But if things are getting worse in the UK, the food situation in other parts of the world is far more dramatic. A recent United Nations report revealed that around 1 in 10 people worldwide went hungry last year, while currently 1 in 4 people in Africa do not have enough to eat. Jake Johnson of Oxfam reported that one person is dying of hunger or hunger-related illness ‘every 48 seconds in Ethiopia, Kenya, and Somalia alone’. This isn’t, he went on, because there isn’t enough food available, but because the price of food has risen ‘to skyrocketing levels’ and people don’t have the money to buy it. Johnson mentioned the war in Ukraine as a contributory factor, but added that ‘against this backdrop, 62 new billionaires have been created and food billionaires overall have increased their collective wealth by 382 billion dollars since 2020’.

Oxfam’s suggestion is that the food billionaires should be prevailed on to use their wealth to fund a massive anti-hunger effort. Just two weeks of the wealth gains those billionaires have secured, Oxfam has calculated, would go a long way towards combating hunger in places where soaring prices are ‘intensifying food insecurity and pushing poverty to new extremes’. These are obviously fine sentiments, but unfortunately it’s not the way the world of capitalism works. The Cargill global food corporation, 87 percent owned by the 11th richest family in the world with combined wealth of $42.9 billion, has seen its wealth increase by $14.4 billion since 2020 (and by almost $20 million per day during the Covid pandemic). This is par for the course in terms of the way the world market operates. It isn’t a deliberate process on the part of greedy individuals but rather a function of how potential shortages and the price mechanism operate in the impersonal world of buying and selling. It is the outcome of a process which the individuals caught up in it as either victims or victors can do virtually nothing to alter and over which governments too have only very limited control.

The fact is that the capitalist system is not controlled by individual businesses or governments but they have to fall in line with the dictates of the system. And this easily leads to fights breaking out between governments seeking to defend their own ‘patch’, as consistently happens in the world of competition and profit and is indeed happening in many places right now. So, unfortunately, a solution via adjustments by agribusinesses of the kind proposed by Oxfam is little more than a pipe dream, as are exhortations to governments to cancel debt burdens and tax the mega-rich. The capitalist system is a war of profit against humans and the only thing that will change that is to get rid of capitalism,

So just as, on my own local level, I know that food banks can be little more than a bit of sticking plaster, some temporary relief for those in need, on a planetary level it will take more than charity and goodwill by individuals or even governments for there to be any long-term solution. As the Oxfam food policy director, Hanna Saarinen, says: ‘We need to reimagine a new global food system to really end hunger; one that works for everyone.’ But the trouble – and the truth – is that such a food system is simply not feasible in the framework of the system we live in, where, at the end of the day, profit must always trump need. And this applies regardless of the goodwill of the many who try to help their neighbours via food banks. And it also trumps the truth uttered by Margaret Mead that helping others is what makes us human and that, given half a chance, that’s what we’ll do, since ‘we are at our best when we serve others’.