As the media frenzy concerning another spectacular but predictable demise of a British Prime Minister begins to subside there will be those who will try to divine a meaning in all of the populist bluster of the last few years. Like Trump in the USA his attempt to bypass and disregard the political establishment was a resounding failure. The most powerful office of state seems, in the end, to emphasise its weakness when confronted by the real power of the ruling elite. All of the millions who were conned into thinking that voting for populist candidates like Boris Johnson would change anything are forced to the realisation that their votes are meaningless if they attempt to thwart the ruling class and their need for ‘business as usual’. Perhaps Johnson was surprised at just how little power the office of PM brings with it.

A vision of him holed up in a fortified No. 10 defended by the hordes of his northern ‘red wall’ supporters paralleling the Trump militia’s storming of the Capitol building is both comical and disturbing. That the man had no moral compass or political integrity is no surprise to socialists but what we do find unforgivable is his warmongering activities on behalf of NATO in the name of the Ukrainian people. One of his more incoherent statements concerned his assertion that if Putin was a woman he would not have invaded Ukraine. Does he have no memory of the Tory heroine Thatcher glorying in the Falklands War? She may not have instigated the invasion but she loved every moment of it. Indeed many feminists at the time seriously asserted that she was not really a woman at all. So what is the real nature of political power and are female leaders instinctively more benign and less belligerent than their male counterparts?

A friend once insisted that she had no interest in history because it was merely a record of ‘boys’ power games’. Whilst it is true that the nature of the evolution of private property societies and their warrior ethos has promoted patriarchy there have been examples of powerful and belligerent female leaders. From Boudicca and Cleopatra in the ancient world to queens of England including Matilda, Bloody Mary and Elizabeth I. There is no record of Queen Victoria objecting to her other title as ‘Empress of India’. Benazir Bhutto, Golda Meir, Tansu Ciller and Chandrika Kumaratunga are all female leaders of the modern era who could hardly be called pacifists. Condoleeza Rice in her role of National Security Advisor in the US played a significant role in prosecuting the illegal war in Iraq and the instigation of the use of torture. The characteristics needed to be a successful politician within the capitalist context are the same for both men and women and gender seems to make no significant difference. Like leading men within the mainstream political parties their primary role is to protect the power and wealth of the parasitic elite. If war is needed to do this they will have no hesitation in beating the drum.

Vladimir Putin has become demonised in the West as a maniacal imperialist despot. But the truth is that his actions would be duplicated by many other capitalist leaders if they felt they had been systematically lied to and threatened by a rival and enemy. Putin represents the pride that Russia once felt in its supposed imperial heyday as the ‘Soviet Union’. Promises undertaken by the US not to expand their empire (NATO) any further east have been broken and rightly or wrongly the Russian elite feel they have been betrayed and insulted. They proclaim that Ukraine was the gateway to the invasion of their country by Napoleon, the Kaiser and Hitler and that they will never allow this to happen again. Meanwhile members of the working class on both sides continue to murder each other in the name of their respective national oligarchs. The idea that this is simply ‘Putin’s War’ rather than an inevitable result of national rivalries and the economic objectives that they serve is just tabloid propaganda. 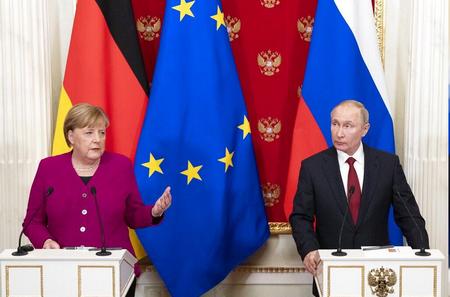 An unlikely candidate for the role of female peacemaker came in the form of German leader Angela Merkel who, apparently, begged George Bush Jnr. not to continue to pressure Ukraine to join NATO since she plainly foresaw the conflict that this would unleash. The momentum of history has little regard for the illusion of power that leaders try to project. As Merkel’s ‘illustrious’ predecessor Otto von Bismarck once remarked with unusual humility: ‘The statesman’s task is to hear God’s footsteps marching through history, and to try and catch on to his coattails as he marches past.’ If we substitute the word ‘progress’ for the reference to God this has an almost Marxian quality to it. Bismarck also knew that a united Germany was inevitable and that his efforts to maintain Prussian hegemony were doomed – it seems that those who are most successful as statesmen/women recognise how limited their power really is.

An analysis of the power of individuals and groups through history leads socialists to believe that leaders are a political anachronism that have no place in the modern world. The global working class must act as a united political force to finally eliminate the mythology of ‘great men and leaders’ and the tribal interests that they represent. Only then can humankind’s true historical destiny be fulfilled.