Proper Gander – A Bite From The Apple 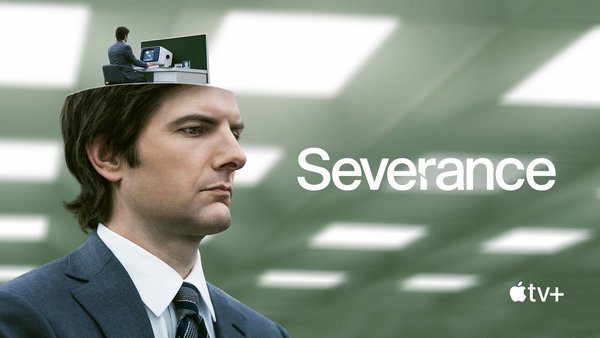 Who better to warn us about the dangers of technology and corporate culture than Apple Inc? The recent American drama serial Severance, released through Apple TV+, was an offbeat and engaging thriller set in an office with a unique approach to managing its human resources. Echoing Black Mirror’s template, the series imagines a piece of technology which sounds like it could be invented and embedded within a few years and explains how it’ll lead to a scary alienated dystopia.

The premise is that staff working for the mysterious Lumon Industries have voluntarily undergone a procedure called ‘severance’. This involves a microchip being inserted into their brain, making them an ‘appendage of the machine’ in a more literal way than Marx meant. The chip separates their persona at work from their persona outside, meaning that when they’re in the office they can’t remember anything of their home life and vice versa. Communication between the workplace persona – the ‘Innie’ – and their ‘Outie’ self at home, such as through smuggled notes, is prevented by ‘code detectors’ when they enter and leave the office.

The severance procedure is supposed to put a definite dividing line in Lumon’s staff’s ‘work-life balance’, a phrase which meant ‘how much employment encroaches on our lives’ until the pandemic disrupted everything and a ‘work-life balance’ became a luxury for many. You can tell Severance had been drafted out before Covid hit; working from home isn’t an option for the characters in the drama, and wouldn’t fit in with the premise. Perhaps as a result, the story isn’t set in any particular time; the severance technology is futuristic, while the cars and computers are styled to look like they’re from the last century.

The severance procedure is an exaggeration of how in real life we often find that the ‘version’ of ourselves at work is a bit different from that outside. When we start our shift, our personalities shift to slot in with the culture where we work, with its written and unwritten rules and norms. Many workplaces, especially sleek offices like Lumon’s HQ, feel impersonal and artificial, and difficult to be at ease in. The drama highlights this with the forced fun of the parties thrown for Lumon’s Macrodata Refinement division as a reward for reaching their targets. The story centres on the four members of this team, and the sinister management who ensure that they stay focused on their work. Most of the characters’ conversations, whether in work or outside, are stilted and uncertain, and the only character with any joy is the non-Lumon employee and author of a tacky self-help book which sounds inspirational compared with the oppression of office life.

The work carried out by the Macrodata Refinement team makes little sense, involving sitting at their desks grouping together numbers on their screens according to how ‘scary’ they are. In real workplaces, we’re often put in positions where we have to accept routines we don’t understand and which seem to be there just to prop up a system. Moreover, being a tiny cog in a big machine usually means not having much ability to affect the procedures we follow. In Lumon Industries, the purpose given to the apparently purposeless work is to follow the vision of its founder, a more old-fashioned figure than the real world’s tech luminaries with a messiah complex.

Naturally, the Macrodata Refinement team members each start to question their employment. Political resistance to the severance procedure is mentioned, but the drama’s emphasis is on how it makes them feel uneasy, especially alongside Lumon’s suspicious ways of operating. Annoyingly, the series ends just as an important plot point has been reached and without answering questions about Lumon’s motives, so we’ll have to wait for season two to see how the scenario pans out.

While Black Mirror is the most obvious influence on Severance, it is also part of a long-running trend in science fiction exploring fears of having our personalities moulded by a power-hungry elite. In the 1972 book and 1975 film The Stepford Wives, the women of the well-to-do town of Stepford are replaced by obedient replicas to serve their husbands, a clever critique of conservative attitudes to women’s roles. This came in the wake of the classic 1954 book / 1956 film Invasion of the Body Snatchers, about aliens who are surreptitiously substituting bland duplicates for people, interpreted as a metaphor for concerns about ‘communism’ infiltrating America. Its 1978 remake effectively reinterpreted the threat of being turned into an automaton as an extension of how society alienates us. In these stories, surrendering your personality is involuntary, whereas in Severance, it’s chosen as a career move, albeit without realising all the nasty implications. In this way, the series is reminiscent of the 1988 movie They Live, where the ruling class (aliens, again) hide the truth and manipulate apparently content people to conform to the status quo, using subliminal messages in the media rather than implanted microchips. Another antecedent is the impressive 1967 TV serial The Prisoner, also set in a stylised, isolated place with its own strange rules and rituals to protect a secretive system. A message behind all these stories, including Severance, is that conforming to what’s in the interests of those in power is dehumanising, even if this doesn’t come with microchips.