What’s in a word?

The word ‘socialism’ peppers current political discussion. When Boris Johnson was seeking respite from his well-known recent setbacks by announcing a limit to rises in people’s energy bills, a Tory MP got up in the parliament to say that the Conservative Party should not be supporting socialist policies. In the United States, right-wing opponents of Joe Biden never cease to refer to his policies as ‘socialism’. And when we hear reference to what happened over much of the 20th century in Russia and Eastern Europe and still very much happens in countries like Cuba and China, the word ‘socialism’ is often used as a quick and convenient way to describe it, whether coming from detractors or supporters. Clearly, when people use the word in these different cases to characterise a form of government or government policy, they do not all have the same idea in their mind. But what unites all these uses is the idea that the state is taking charge of economic matters and attempting to control what would otherwise be determined by market forces.

It’s also a word that pops up almost as a matter of course when people are trying to describe not just state control of an economy but also state dictatorship over people’s everyday lives. This has happened recently, for example, in two quite separate BBC Radio 4 programmes on Albania. A documentary entitled The Great Pyramids of Albania looked back to 1996 when a large proportion of the Albanian population fell victim to a giant ‘Ponzi’ scheme. People sold their houses, land and livestock to buy into pyramid schemes that were doomed to fail. By the end of that year, what was basically a rob-Peter-to-pay- Paul scheme had swallowed up almost 50 per cent of the country’s annual income and affected the lives of most of its population. The programme’s presenter tried to explain the psychology which hooked people into trusting this scheme, how the mass delusion evolved and then what were its dire consequences (a violent civil war in fact) once it became clear that no one was getting their money back and some had lost everything. But he did not do this without referring on a number of occasions to what had preceded this in the period from the end of the second world war to 1991 as ‘socialism’ and its end as ‘the fall of socialism’. During most of that time, what had happened was that Albania had been ruled in a direly oppressive way by a ruthless Stalin-style dictator, Enver Hoxha, who succeeded in establishing personal control not only over the economy but also over the country’s political system. 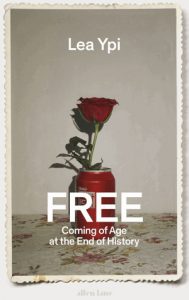 And it was the Hoxha period of Albanian history that the second recent BBC programme on that country focused on, via a recently published memoir entitled Coming of Age at the End of History, written by a woman who had lived through it. In it the author, Lea Ypi, describes how people were conditioned to believe that the one-party rule they were living under was ‘freedom and democracy’, and that this was what ‘socialism’ was. She describes reinforcing mechanisms such as the loyalty to Hoxha and the Party sworn by pupils in school every morning. But prying ears were everywhere and any hint of non-adherence to the system could lead to dire consequences ranging from dismissal from work, to ‘re-education’, to prison or to execution, and such things happened frequently. The title of the Albanian song accompanying the programme, A Pickaxe in One Hand, a Rifle in the Other, used as a signature tune by Albanian state radio, captures well the tenor of a regime characterised in the author’s memoir as ‘an open-air prison’. Once she had finished her schooldays, Ypi tells how she left Albania, studied philosophy and politics and ended up as what she is today, a Professor of Political Theory at the London School of Economics. Yet her memoir suggests that she is teaching her students that what happened under Hoxha was socialism, even though one might think that, with her knowledge of political theory, she would know that to label what happened in Albania in that way is an outright perversion of the word’s original meaning.

Of course, no one has a patent on words, especially those describing ideas rather than concrete objects. Yet, when the word ‘socialism’ was popularised in the 19th century by such writers as Marx and Engels, it clearly meant an entirely different society from the one that existed then and still exists now based on buying and selling and private or state ownership of the means of living. It meant a society of free access to all goods and services based on the concept of from each according to ability to each according to need and presupposed the abolition of the wages system. Yet the dictatorial regimes, run along state-capitalist lines, that later called themselves socialist (and/or Marxist) were the polar opposite of anything Marx and Engels would have recognised as the society of ‘freedom from necessity’ which they described as ‘socialism’ or ‘communism’ (they used the terms more or less synonymously). While we must recognise that many people do not want to see the kind of society advocated by Marx and Engels but instead prefer one of the many slightly different varieties of capitalism that exist at present (‘free market’ capitalism, state capitalism, ‘mixed’ economy, etc), it does not seem unreasonable to expect them, if only to achieve some kind of clarity of thought for themselves, not to throw the word ‘socialism’ around willy-nilly. If the title of ‘socialism’ is given to any of these varieties, it betrays a lack of understanding of the concept historically and can only serve to mislead those looking for genuine solutions to the many-faceted problems perpetually thrown up by the capitalist organisation of society.