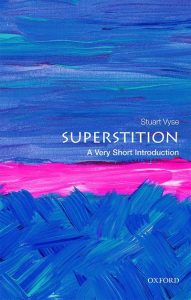 Superstition is basically a belief in magic, that future events can be influenced by invoking or placating some mysterious force. On one level it is relatively harmless, as in the case of lucky charms, star signs, and not walking under a ladder.

Vyse shows that it has a more sinister history. In the West for over 1500 years superstition meant practices that tried to invoke mysterious forces other than those of the dominant religion, which led to those involved being persecuted and/or tortured. He cites the case of Ancient Rome where, when there was an emperor who believed in the traditional Roman gods, Christianity was denounced as a superstition. But, when an emperor embraced Christianity and proclaimed it as the state religion, the boot was on the other foot and the old religious practices became superstition. In fact, both were based on the supposed existence of mysterious forces (gods, angels, demons, spirits of the dead). Superstition is not just part of religion but other practices such as fortune telling, curses and consulting astrologers.

From the 16th century onwards Protestants denounced the practices of the Roman Catholic Church as superstitions, but they still retained some, such as the belief in God and the Devil and that praying to their god could work; and they engaged in more witch-hunting than the Catholics.

The next step was the rise of Science which led to some regarding all religion as superstition. Vyse is reluctant to go along with this, letting religion off lightly despite the fact that the two religions most followed in the world – Catholicism and Islam – encourage and justify superstitious practices, the former in particular. He sees the main problem today as superstition as ‘bad science’ based on unproven mysterious physical forces as in homeopathy, acupuncture and other quack remedies.

Vyse is a psychologist and discusses why some individuals are superstitious. One theory is that it has to do with a feeling of not being in control while personal superstitious practices (gestures, lucky numbers, etc) give an illusion of control. He cites experiments which have indicated this, with superstitions being more prevalent amongst women and the worst off. If so, this would mean there would be a lot less superstition in a socialist society. 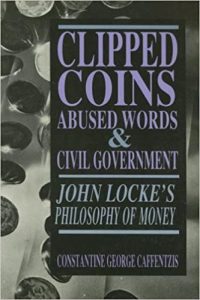 This is a slightly revised, second edition of a book that originally came out in 1989 in which Caffentzis argues that John Locke, who lived from 1632 to 1704 and whose writings all university students of politics and philosophy are required to study, was ‘the philosopher of primitive accumulation’. Even supporters of capitalism recognise, in fact hail, Locke as an early advocate and ideological defender of their system. This is because of the justification he provided for the private ownership of land and industry and his view that the basic role of governments is to protect property ownership.

Locke’s argument was simple enough. Accepting the traditional Christian view that God originally gave the Earth to humanity for its members to use to satisfy the needs of all of them and not to waste, he argued that in a ‘state of nature’, i.e. before governments and laws were established, individuals worked the land to satisfy their needs and were entitled to what they mixed their labour with – his so-called ‘labour theory of property’. However, at first this was only up to the point where their needs were satisfied; if they produced more than they could consume themselves, they couldn’t let it go to rot but were obliged to give it away or let others use it. This changed, Locke went on to argue, with the emergence of money as a means of exchange and a store of value as it meant that any surplus could now be converted into something that would not rot – the precious metals silver and gold.

This – what Caffentzis calls a ‘state of money’ – led to a ‘social contract’ between people to set up a government to protect the property of property-owners, especially of the wealthier among them. Locke used the ridiculous, in fact outrageous, argument that in agreeing to the use of money the non-wealthy had tacitly agreed to its consequence of ‘a disproportionate and unequal possession of the earth’ and ‘an inequality of private possessions.’ This, argues Caffentzis, shows that Locke supported not only some members of society becoming landless but also the accumulation of wealth in the form of money, the two conditions Marx pointed to for capitalism to get going as an economic system.

Locke was not just a philosopher. He was involved in government. For instance, he drew up a constitution for the Carolinas, then still a British colony, which condoned chattel slavery. He was also involved in monetary policy, a discussion of his view on which is the theme of Caffentzis’s book. The main currency in England in Locke’s time was silver coins of a given weight. By the mid-1690s, due to clipping, most no longer contained their face-value weight of silver. To remedy this, which had become a hindrance to trade, it was decided to call in all existing silver coins, melt them down and re-coin them. The question was at what rate. Some wanted to devalue the pound and the shilling by defining them as a smaller amount of silver. Locke was against this. Caffentzis interprets this as meaning that Locke realised that, without a currency free from government manipulation, Britain would never come to dominate world trade. He also links this to Locke’s theories of knowledge and language.

Caffentzis presents his case in a clear, easy-to-follow style. The same cannot be said of the 23-page Introduction by Paul Rekert. This should be skipped or read afterwards in case its academese puts you off going on to read Caffentzis himself.

In a Preface Harry Cleaver writes that ‘escaping money has only recently returned to the agenda of revolutionaries’ as events ‘have made growing numbers of those looking beyond capitalism conclude that decommodification of life and escape from money are essential to the conceptualization and building of new, non-capitalist worlds’ (that could be said simpler too). Which is all to the good, though for some revolutionaries it has never been off the agenda. 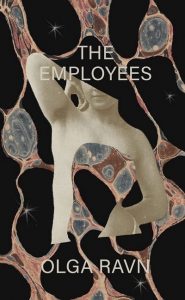 The Employees: a Workplace Novel of the 22nd Century. By Olga Raven. Lolli £12.99. (Translated from Danish by Martin Aitken)

The workplace in question is a spaceship, with a crew of humans and humanoids, which has travelled far from Earth and is orbiting the planet New Discovery. Some peculiar objects from the planet have been taken onboard, objects with strange fragrances and which are given unofficial names, such as ‘the Gift’ and ‘the Half-Naked Bean’.

The novel begins with a statement by a committee that interviewed the employees, which is full of management-speak, such as how the impact of the mysterious objects ‘might be said to precipitate reduction or enhancement of performance’, so ‘illuminating their specific consequences for production’.

Gradually the reader discovers why the committee exists and what the reactions of the workers have been. This applies to both humans and humanoids, and it is not always obvious to which category an individual belongs (‘Does it say in your files what I am?’, asks one interviewee). One humanoid says they were ‘made for work’, and cannot understand how a human could be more than their work, yet a human says their job means everything to them. One human misses shopping back on Earth, while another wants to hold a child in their arms again, and a third is grateful for being able to spend time with a hologram of their son. One humanoid feels sad, and one human prefers to spend time with the humanoids. Another interviewee (human? humanoid?) begins to feel disloyal towards the organisation behind the voyage: ‘it pains me because there’s no place for me other than inside the organisation’.

A central theme of the book, then, is the role and importance of work in a person’s life, in a setting where it seems there is little else to do other than work. Humans and humanoids become harder to distinguish, even though they stop talking to each other. One worker notes that it takes twenty years to produce a capable human employee, and a lot can ‘go wrong’ in that time, whereas it takes just two years to produce a humanoid worker. Humanoid bodies are more valuable than human ones, being more durable and open to software updates.

The organisation’s board of directors is primarily concerned to preserve the ship and its cargo, especially the weird objects, and it turns out that the directors are themselves humanoid, though this was not conveyed to the human crew, as they would be likely to react more positively to fellow humans.

All in all, an interesting if difficult reflection on such topics as the role of work, what makes someone human, what activities other than work are needed. Not a socialist science fiction novel, but one with noteworthy comments on some aspects of capitalism (even though that word is not used).