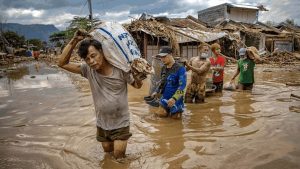 Climate change is reshaping our planet. Coastlines are encroaching further inland, deserts are expanding, the range of plant and animal species are declining. The climatic change that is making parts of the world unliveable is another example of people in poorer parts of the world paying the price for capitalism.

Scientists forewarned that the effects of global warming would result in massive migrations of peoples. No nation is immune from the consequences of climate change but it is the poorest and most vulnerable communities – those least culpable for the environmental crisis – who are being the hardest hit. We are already witnessing the number of climate refugees rise.

Being a migrant involves risks and costs yet the media’s attention is centred upon the effects upon the host nation rather than the harrowing experiences of the migrants themselves and, worryingly, because of the absence of focus upon the reasons families uproot themselves from familiar surroundings, sympathy and understanding is lacking. Instead of welcoming the opportunity to help fellow human beings, hostility is shown towards newcomers, particularly if they are of a different colour or religion. The World Socialist Movement explains that we are one planet, one people, a human family, and as brothers and sisters we must look out for one another.

In 2014, there was a rise in migration from Central America due to drought and the spread of crop disease. The mass exodus has continued unabated with the USA militarising its southern border to halt the desperate fleeing the intensification of climate change upon what is termed the ‘Dry Corridor.’ In Africa there has been
an escalating conflict between the contending cultures of herders and farmers as they competed for dwindling resources.

The problem has become worse as drought conditions persisted and many of the Sahel nations are now engaged in civil wars.

If it is not drought and crop failures that force large numbers of people to flee, it will be rising sea levels.

In Bangladesh, we have seen frequent typhoons and flooding of the country’s low-lying coastal districts. National Geographic describes the reason for the displacement of hundreds of thousands of Bangladeshi from their homes to the cities as driven by climate change and experts expect that figure to rise to millions as water levels rise (on.natgeo.com/2Q3p5hy).

Likewise, high tides will submerge much of Vietnam’s Mekong Delta, now home to 18 million people, by the latter half of the century.

The climate refugee emergency is here and capitalism’s system of nation-states is incapable of addressing the crisis of climate refugees, sadly a status not legally acknowledged by governments or the UN, preferring to describe those fleeing the impact of environmental destruction as economic migrants.

Accepting that models of future migration are based upon educated guesswork and informed assumptions, full of possible pitfalls, the only way to efficiently mitigate the detrimental effects of mass migration is to prepare for the worst.

Breaches of their national borders may be what the developed countries fear the most, requiring them to fortify their frontiers, but the problem begins when people abandon their farms for the city. Most people don’t want to leave their homes so initially they relocate to larger towns and cities. Mega-cities are multiplying in number and urban services have broken down. When that strategy fails, they then take hazardous journeys to re-settle in a foreign land where they are treated as economic parasites and pariahs by the locals.

In 2018, the World Bank estimated that three regions (Latin America, sub-Saharan Africa, and South-east Asia) will generate 143 million climate migrants by 2050. A worst-case scenario by the Institute for Economics and Peace thinktank suggests that perhaps a billion people by 2050 will be subjected to the pressure of global warming to relocate even if not all will act upon it. The pessimistic predictions of some scientists predict that heatwaves and humidity will become so extreme in various parts of the world that people without air conditioning will simply die.

A report based on interviews with senior US military experts concludes that climate change will create far more refugees than have fled the Syrian civil war.

‘What we are talking about here is an existential threat to our civilisation in the longer term,’ Brigadier General Stephen A. Cheney observed. ‘In the short term, it carries all sorts of risks as well and it requires a human response on a scale that has never been achieved before. If Europe thinks they have a problem with migration today, wait 20 years and see what happens when climate change drives people out of Africa – the Sahel especially’ (bit.ly/3heX3uF).

The need for socialist ideas is greater than ever, and we can only urge people to look deeply into the problems of capitalist society, deeper than the slogans on their banners. Socialists combine two remarkable human capacities, the emotional and the rational, in order to take things into our own hands and run our own world, in the interest of all humanity. Peoples’ histories may be different but we all share our future in common.

One Reply to “Material World”