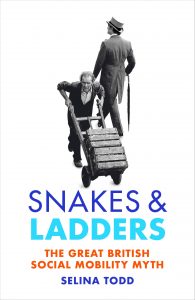 ‘Work, boys, work and be contented
So long as you’ve enough to buy a meal
For if you will but try, you’ll be wealthy – bye and bye –
If you’ll only put yer shoulder to the wheel.’

That social mobility in Britain is largely a myth is shown in Selena Todd’s book. It’s a myth, of course, that’s been around a long time, as sung in the mid-nineteenth century music hall song quoted above, or printed in Conservative Party manifestos of recent years, telling us that all you need to become rich is to work hard. Todd notes, though, that this message can run parallel with suggestions that people should know their place, as when the Tory education minister Lord Percy complained in the Daily Telegraph in 1925 that scholarship boys from the middle- and working class were encouraged to ‘use the school as an escape from their normal job’ [our emphasis].

A society where success is born out of hard work, talent and ambition, the argument goes, is surely a fair one. People rise up the social ladder to the level of their abilities, and even those without these qualities can benefit from the ingenuity of those that have them. This is the myth: the main influence on success has always been birth and wealth.

That the class structure is seen as a ladder, to climb up or step down, is significant, deriving from early census data. An early incarnation came from the Registrar General in 1911, a time of increasing union power, greater influence of the Labour Party, the struggle for women’s suffrage, and the aristocratic House of Lords concerned with the power of the middle-class House of Commons. The Liberal government posited a ‘scientific’ census, where the so-called culture of occupations would determine their class position. Professionals and industrialists were on a level with the (often much wealthier) landed aristocracy. Manual labourers and domestic staff, though invaluable, were nevertheless at the bottom. Vital unpaid work such as mothering was just ignored.

But by letting a few rise up, the elite can claim that Britain is a meritocracy, to the benefit of those who gain from the preservation of this class-based society. And social mobility is not only subjective: how particular work is placed in the hierarchy depends, unsurprisingly, upon its value to capitalism. Before WWI, work done by clerks was more valued as industry required more form-filling, regulations to be dealt with and other written analyses. After the war, more of this work involved routine tasks and so their social standing dropped. After WWII and the emergence of the welfare state, teachers and nurses were valued, but, approaching the 21st century, when wealth acquisition is considered to be more important, these occupations fell down the scale.

The book is a fascinating history, documenting the voices of those who lived through these periods. It’s a useful resource, showing how societal changes allowed some limited improvements to the social standing of working people and the forces arraigned to prevent this advancement, and the fears of falling down the ladder. It is also refreshing to see class distinction defined as “the tiny minority who live off other people’s labour, and the vast majority who do not”.

Todd has solutions. People who worked to ascend the social ladder did so, by and large, not for wealth, but to increase security and control over their lives, and in some cases to contribute to society. But these aspirations rarely came to fruition. Todd suggests a change in focus to ‘replace social mobility with a commitment to equality and innovation, and on the benefits that this would bring’. An egalitarian shift in education to be state-funded and run by local education authorities, available to people of all ages. For private education, remove its £200 million annual state subsidy, add VAT and subtract its charitable status. Change the emphasis of education to be more self-selective and not primarily skilling up for work, which will create innovation. Progressive taxation, reward essential workers – notably the front-line workers, usually poorly paid, who have worked through the Covid-19 pandemic. Redistribute economic power from male-dominated London towards regional, without gender discrimination.

Other reviews have considered Todd’s conclusions as either fanciful, a result of her prejudices or an ideal to which one can strive. It’s perhaps unfortunate that, shortly after the book’s publication date, Boris Johnson is reported as saying that the success of the Covid-19 vaccination in Britain is due to capitalism and greed. So much for rewarding those front-line workers who kept society going; it’s business as usual. Nor is the offer of a 1 percent pay rise to nurses encouraging.

Todd’s sincerity is unquestionable, but, from a socialist point of view, unrealistic. Unfortunately, capitalism cannot cope with equality. Equality cannot exist in a society where wealth is distributed through competition. Attempts in capitalist regimes to ensure that no-one has too much or too little have never been successful. Only a society based upon common ownership can ensure that. 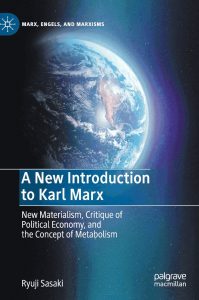 A New Introduction to Karl Marx: New Materialism, Critique of Political Economy, and the Concept of Metabolism. By Ryuji Sasaki, translated by Michael Schauerte, Palgrave Macmillan, 2021.

This book examines the theories of Marx stated in the above subtitle, particularly their significance to the transformation of society. The focus is on one of Marx’s most famous works, Capital, but it is not intended to be an introduction to that work. Marx came to reject the realm of philosophical ideas as an explanation of the world (common at the time) preferring the insight that his basic world-view is ‘the actual, given relations of life’ and this ‘method is the only materialist, and therefore the only scientific one’ (Capital, Volume 1, 1867). This is what was new about Marx’s method and it is a succinct explanation of the relationship between materialism, science and socialism.

The first volume of Marx’s Capital has the subtitle ‘A Critique of Political Economy’ and is not merely a work of political economy (or economics, as it would be called today). For instance, in Marx’s day many economists accepted ‘Say’s Law’ (after the French economist JB Say) which asserted that production creates its own demand. Some economists today still accept this and argue that any imbalances between production and consumption are temporary and ‘self-clearing’. In this view, crises are impossible. Sasaki argues that, for Marx, it is the money economy which makes crises possible. Buying and selling in the aggregate is inherently unpredictable and, Marx wrote, ‘crises cannot occur without the circulation of money’.

Metabolism is a concept that became well known in the nineteenth century through the work of the chemist Justus von Liebig, becoming a more broadly encompassing term that included not only the chemical changes that individual organisms undergo but also the interaction between living organisms and their surrounding environment. The term metabolism began to influence not only the natural but also the social sciences, and was used analogously within political economy to refer to the circular, organic activity of human beings involved in production, distribution, and consumption.

Marx first used the term metabolism in 1851 as an analogy to explain the cyclical activity of society as an organism. All the way through to his writing of Capital, Marx continued to use the term in the sense of organic economic activity. However, Sasaki argues that Marx’s use of metabolism was not limited to that meaning. Eventually he began to use the term to express the material circulation between human beings and nature. Capitalism is a disturbance of the metabolism; socialism will restore the metabolism. For Marx, socialism will be a society in which the ‘associated producers’ will ‘govern the human metabolism with nature in a rational way, … accomplishing this metabolism with the least expenditure of energy and in conditions most worthy and appropriate for their human nature.’

At the end of this book there are a couple of lengthy appendices, one on Marx’s method and another on his theory of reification. It is encouraging to see a work of this quality being produced in Japan, and congratulations are due to Ryuji Sasaki and his translator, WSPUS member Michael Schauerte. 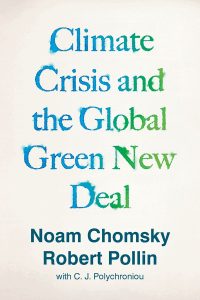 This is not truly a book written by Chomsky and Pollin together; rather both respond individually to questions posed by Polychroniou, who adds a short introduction. Chomsky begins by saying that climate change presents a new ‘threat of destruction of organized human life in any recognizable or tolerable form’ and then discusses how the US Republican Party has served corporate power, with the Koch brothers supporting the use of fossil fuels, where they made their fortune. But it’s not clear if this justifies describing the Republicans as ‘the most dangerous organization in world history’.

Historically, the main blame for causing climate change since 1800 falls on Western Europe and the US (i.e. the economic systems there), while the richest tenth of the earth’s population are responsible for nearly half of all emissions tied to personal consumption. The poorest are the hardest-hit, such as dry land farmers, who rely on rain for irrigation. Extreme weather events, such as cyclones and hurricanes, have had devastating impacts on some places, including Zimbabwe and Puerto Rico.

Pollin notes that it is realistic in principle to reduce global CO2 emissions to net zero by 2050, by means of improving energy efficiency and expanding clean renewable energy sources. Existing nuclear plants, which do not emit CO2, could continue for a while, yet cannot be part of a long-term solution. Despite some alarmist claims, relatively small proportions of land need to be used to generate sufficient solar and wind energy, perhaps three percent of the land in the UK and just one percent in the US, which is less densely populated.

Closing fossil fuel enterprises would mean the loss of masses of jobs and far smaller tax revenues, but use of clean energy can lead to job creation; unfortunately these points show how much the authors are really stuck within the assumptions and framework of capitalism. They do show some scepticism, such as Chomsky saying that we are doomed if profit-making remains the driving force, and that production for profit cannot be sustained. ‘Dismantling’ capitalism is supposedly not possible in the time frame needed, but doing so should proceed in parallel with averting environmental disaster, though no argument is made that the two together can be achieved in time.

Pollin states that eco-socialism and the Green New Deal are fundamentally the same project, but since the latter assumes the retention of money and employment, it is certainly not the same as our vision of World Socialism. There are some references to ‘establishing the basis for a future free and democratic society within the present one’, apparently based on Bakunin’s ideas, but hardly anything about achieving this is in a practical way. After all, it will be much more straightforward to implement carbon reduction in a world without profit and corporations.