The Bill also provides for the families of men on strike to be reduced below the government’s own poverty line, at the moment £8.50 plus rent a week for a married couple. (…) The extra suffering this will cause should please employers like Lord Stokes who from their well-upholstered boardrooms have been complaining of strikers being featherbedded. Extreme poverty will once again become an important factor in weakening the workers’ side in strikes. How useful financial hardship amongst the strikers can be to the employer was well shown during the Post Office strike and the postmen would undoubtedly have had to give in earlier had this new Bill been in operation. 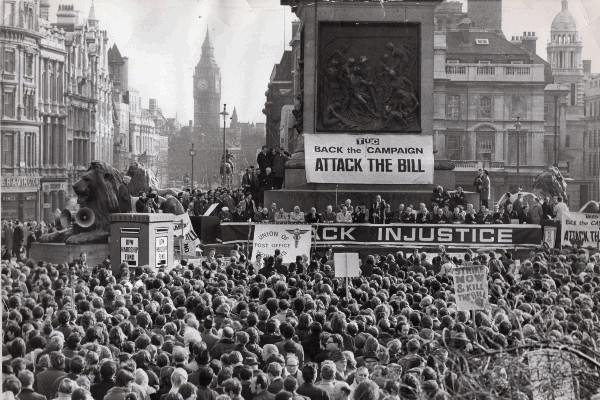 The government’s Social Security Bill is a vicious anti-working class measure which is intended to hurt the wives and children of workers in order to discourage strikes and force strikers back to work. Like the Industrial Relations Bill, it will strengthen the overall position of the employing class in its struggle with the working class over wages and conditions. For this reason the Socialist Party of Great Britain is opposed to this Bill.

But in doing so, we have no illusions about the role of governments in capitalist society. We do not really expect them to subsidise strikes against their masters, the capitalist class, and are not surprised that the present government is taking advantage of working class apathy and ignorance to cut back on some social reforms which, however marginally, favour the working class. This apathy and ignorance is partly the result of the failure of reformist parties like Labour and of the propaganda of the capitalist press. The old socialist saying that the best way to get or defend reforms (if that is what you want) is to build up a strong revolutionary Socialist movement remains true. That is our policy for dealing with the current Tory attacks on long-standing social reforms.