Dealing with the deal

So, the shouting is over, and a Brexit deal has finally been agreed. In one sense, credit where credit is due. Boris Johnson and David Frost have achieved what they set out to do: to get tariff-free access to EU market for British goods; to end freedom of movement; and to remove the UK from the jurisdiction of the European Court of Justice (the body that enforces the rules of the EU’s law and single market policies). Credit where it is due to Michel Barnier and the EU negotiating team, who exacted a measured price for agreeing to the UK’s wishes.

The EU came into being because, after the Second World War, the capitalists of Europe found themselves competing with those of the Soviet Union and the United States. The latter could achieve enormous economies of scale and concentration of capital, no single group of European capitalists could match that. In order to expand beyond the narrow horizons of their national arrangements, agreements needed to be struck so capital could flow and investments be made secure.

The European Coal and Steel Community was brought into being to regulate the core resources that can cause war between states and so harm investments. This was supplemented by the European Economic Community, and eventually became the European Union. The goal to harmonise and protect investments led to the creation of a single market and customs union: essentially meaning that all of Europe’s capitalists were competing under the same rules.

Rather than have erratic bilateral negotiation of those rules between states, the institutions of the European Union were born to harmonise, implement and enforce those rules. The European Council, the Council of Ministers, the European Parliament and the European Commission were set up to engage in continuous open discussion about how to build the economic community. The European Court of Justice was given the job of interpreting the rules when dispute arose: taking the politics out of matters and turning them into a predictable architecture so that capitalists knew that mere whims of political office holders could not interfere with their interests.

This pooling of national sovereignty necessarily meant power slipping away from the individual state’s elites and a weakening of the links between their capitalist class and their state (and also meant the emergence of a European elite, such as the likes of Stephen Kinnock, son of the former European Commissioner Neil and in turn married to the former Prime Minister of Denmark Helle Thorning-Schmidt).

Divergence of interests
The Brexit debate in the UK was driven by the divergence between the manufacturers of goods and those engaged in financial services. Different rules and jurisdictions are part of the life blood of financial services, every barrier to trade is an opportunity to make money, whereas for manufacturers they are a cost to be eliminated in the search for profits. As financial services became a more significant part of the UK economy, so the cries to be freed from the regulatory grasp of Brussels rose, and the Brexiteers found their coffers filled with fighting funds.

The deal achieved between the UK and EU, formally styled the EU–UK Trade and Cooperation Agreement, sets out the new terms of trade and investment going forward, now the UK has left the institutions of the EU.

Most obviously, it allows tariff-free and quota-free trade between the two market areas of the UK and the EU. This means no tax will be paid on goods moving to or from either market. Customs checks, however, still apply, although the Agreement does mandate that they will be minimal checks and trusted trader schemes will be set up to keep goods moving through as smoothly as possible. However, this only applies to goods.

Services, and importantly financial services, are not covered by the agreement beyond the general WTO terms to prevent discrimination against overseas firms and investors (eg. by having local ownership requirement rights). There is no provision for recognition of qualifications or ‘passporting.’ The size and strength of London’s financial services mean that, given the commitments to the free flow of capital, this should not be a short-term problem, but it does mean there is a gap and both parties are free to try and exploit it.

Partnership Council
The Agreement will be managed by a Partnership Council which will contain a UK government minister and an EU Commissioner (meaning the UK no longer can talk directly to the Council of Ministers, as they discovered during the Brexit negotiations, so that scope for trying to talk to heads of government will be limited. The UK will have to deal with the EU as a united bloc). This Partnership Council will be supplemented by a plethora of working groups and specialist committees to implement the various detailed strands of the Agreement. It will have its own secretariat. The Council will meet alternately in London and Brussels.

The Council will supervise and facilitate the implementation of the agreement. It also has the power to amend the agreement and make supplementary agreements. As such the deal is a deal to keep talking, and be in continuous negotiation over terms of trade, much like the EU infrastructure. That this only needs the agreement of a government minister and an EU commissioner means changes can be undertaken quickly and quietly, without transparency of process.

This is even more so, given that the Act of Parliament to implement the deal expressly gives UK ministers the power to make regulations to implement the agreement. Further, the law requires that UK courts interpret all laws in such a way as to make them compliant with the agreement. So much for Parliamentary sovereignty: from now on one minister’s deal with Europe can radically change all the laws of the UK without debate and without scrutiny. It also raises the prospect of UK courts effectively striking down any future Acts of Parliament that might be deemed to be incompatible with the partnership agreement.

As European Law no longer applies, when disputes under the agreement occur, they will first be raised in the Partnership Council and if bilateral agreement cannot be reached, a three-person arbitration board will be convened. The UK and EU will maintain a list of people who would be eligible for ‘high judicial office’ to serve on these tribunals. Only the UK and EU can raise these disputes, private citizens cannot raise them. Their rulings will not directly become law, and courts in the two jurisdictions are expressly not bound by them. 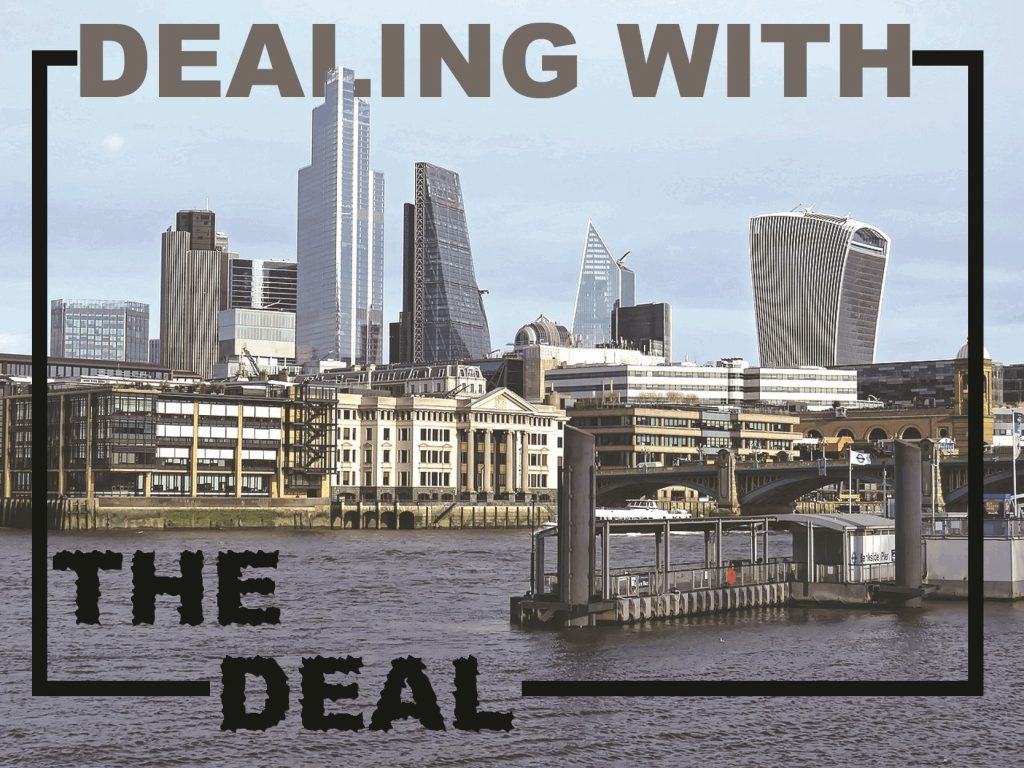 That is, Johnson has expressly removed the legalistic framework that characterises the EU approach to market governance, in favour of bilateral political relations. Instead of imposing fines or other penalties, the arbitration panels will enable the respective parties to raise retaliatory tariffs should the other side not live up to their part of the deal. This includes cross sectional tariffs, ie. being able to raise tariffs on goods outside the immediate dispute in order to inflict proportionate pain, eg. if the EU started to subsidise cheese, the UK could retaliate beyond imposing tariffs on cars.

The fact that these measures are political (and thus discretionary) means they can be used as a threat before they need to be implemented. The mere threat may be enough to deter investors. The lack of predictability will be a significant factor, but that is the price for leaving the court system.

(As a matter of fact, the ECJ does retain a small role, governing the UK’s participation in European schemes, and also the rules of Northern Ireland, under the Withdrawal Agreement).

Toddler’s bedtime
Although the UK managed to avoid being bound by the EU’s regulations and level playing field rules, this looser formation will leave the UK in the position of the toddler who goes to bed whenever they want to, and it is just a coincidence that that is the same time their parents tell them to.

Rules on country of origin mean that the UK cannot leverage its proximity and access to become a route for third parties to enter their goods into the EU. With car batteries being subject to country-of-origin rules, the UK wouldn’t be able to turn itself into a place of assembly for electric car makers, an important future market.

The big loss for workers is the end of freedom of movement. To go and work in the EU will generally require a work visa from a member state (short-term working is permitted under restricted circumstances, but people have already noticed that singers and musicians will find it much harder to tour in Europe now).

What the deal amounts to is an architecture for a managed divergence now the UK has left the EU. What it means in practice is yet to be seen, but a possible example is Ireland, after it achieved independence from Britain. It spent the next fifty years effectively as Britain’s farm, bound through infrastructural and economic ties to Britain despite being politically independent. The power of capital knows no national boundaries, and even if a group in Britain has managed to secure their exclusive access to the levers of the British state, it is not guaranteed they will be able to do much with them.

Indeed, it is likely, now the heat has been taken out of the immediate UK/EU relationship, that economic convergence could quietly resume through the mechanism of the Partnership Council.
PIK SMEET