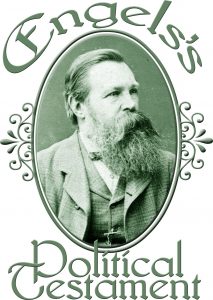 Engels died in August 1895. One of his last published writings was an introduction to Marx’s The Class Struggles in France 1848 to 1850, a collection of articles written by Marx at the time. Its content is such that it can be regarded as his political testament.

Reviewing the political position that he and Marx had then taken up, Engels wrote that ‘history has shown us to have been wrong, has revealed our point of view at that time to have been an illusion.’

Past revolutions, he wrote, had been minority revolutions in the interest of some minority; after the initial victory the revolutionaries split into two sections – those who were satisfied with what had been achieved and those who wanted to go further, but whatever happened the end-result was minority rule.

The illusion, Engels explained, was thinking that, because during the revolutionary wave of 1848 there was already a minority, albeit a small one, which understood what was in the interest of the working class, there was a chance that this minority could draw the majority into carrying out a workers’ revolution:

‘[W]hat was involved here were not false representations, but the implementation of the most vital interests of the great majority itself, interests which, it is true, were at that time by no means clear to this great majority, but which were bound to become clear to it as their practical implementation proceeded, by their convincing obviousness. (…) [T]heproletariat grown wise from experience had to become the decisive factor — was there not every prospect then of turning the revolution of the minority into a revolution of the majority?’

Engels’s reply was unequivocal: ‘History has proved us wrong and all who thought like us’.

And later: ‘The time of surprise attacks, of revolutions carried through by small conscious minorities at the head of masses lacking consciousness is past. Where it is a question of a complete transformation of the social organisation, the masses themselves must also be in on it, must themselves already have
grasped what is at stake, what they are fighting for, body and soul.

The history of the last fifty years has taught us that.

But in order that the masses may understand what is to be done, long, persistent work is required…’
He added ‘and it is just this work that we are now pursuing, and with a success which drives the enemy to despair.’ This was a reference to the use made of universal suffrage by the German Social Democratic Party, but that turned out to be another illusion as the party’s support was being built up for democratic and social reforms within capitalism rather than for socialism.

However, Engels was proved right when a revolutionary minority attempted to apply the tactics of 1848-50 in Germany after the overthrow of the Kaiser in 1918 and to push the revolution forward to socialism. They failed as the rest of the working class didn’t come to want socialism in the course of the revolution but remained satisfied with what had been achieved (political democracy).

As Engels correctly concluded, for there to be a successful socialist revolution the majority ‘must themselves already have grasped what is at stake’ and that, when they had, they could turn universal suffrage ‘from a means of deception into an instrument of emancipation’, but that to reach this point required ‘long, persistent work’.

The full introduction can be found here: tinyurl.com/y6a6qaac