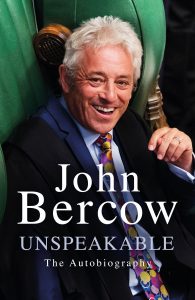 It was always likely that recently retired House of Commons Speaker John Bercow would produce a memoir that settled a few scores, and he hasn’t disappointed. He clearly has an issue with the British establishment and those that personify it, and ‘snobbish’ David Cameron comes in for particularly vitriolic treatment. To give you a flavour of Bercow’s style: ‘In the pantheon of great leaders, the name of David Cameron will never feature. In a list of opportunist lightweights, it will be at the top’.

Then on to Theresa May: ‘Rudderless, without imagination, and with few real friends at the highest level, she stumbled on, day to day, lacking clarity, vision and the capacity to forge a better Britain. In a contest as to who has been the worst Prime Minister since 1945, it is hard to choose between Anthony Eden and Theresa May’.

And on Boris Johnson: ‘As a debater he is undistinguished and, as a public speaker, though humorous, he is often downright poor – hesitant, unable to string sentences together fluently and about as likely ever to warrant the description “captivating orator” as Bertie Wooster… Apart from those notable limitations in a man who has since become Prime Minister, he is, at his occasional best, a passably adequate politician in an age not replete with them’.

Bercow’s own story of course is an interesting one, the son of a Jewish cab driver who gravitated from a youthful dalliance with the right-wing, anti-immigration Monday Club to a barely disguised left-ish stance. This gained him much opprobrium during the Brexit debates, with allegations that he was a biased ‘remainer’, with an influential Labour-campaigning spouse, Sally.

In fairness, as political autobiographies go, it is more entertaining than most, despite the criticism it has received from many reviewers. Bercow likes to see himself in the mode of a parliamentary ‘reformer’ and the dominant thread is about the battles he fought with traditionalists and conservatives of every stripe, including those who took an ill view of his attempts to support the rights of backbench MPs against those of the executive.

There is a surprisingly interesting (and on occasion well-argued) Epilogue where he looks at the future of parliament and of the UK as a whole over the next decade and more. He picks out the key defining features of the UK well, including the influence of its island status (with a total coastline and sea exposure greater than that of either Brazil or India), and the overwhelming dominance of London, which skews the UK population and capital distribution to something more akin to countries in the Third World.

Interestingly, whatever insight and vitriol he has to muster, little if any of it is directed at Labour’s Jeremy Corbyn. Indeed, one suspects he will no doubt become Lord Bercow soon enough (even if he is not – as is usual – nominated by the Prime Minister of the day, but by the outgoing Leader of the Opposition).

Adam Theron-Lee Rensch: No Home For You Here: a Memoir of Class and Culture. Reaktion Books £14.95. 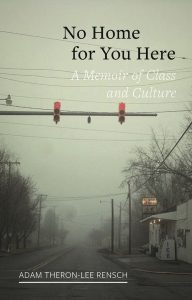 Rensch was born in rural Ohio in 1984 and spent much of his childhood in a mobile home that had been moved from a trailer park after his family were evicted for not paying rent in protest at conditions there. He became a university student, and much of the book, which includes both personal and more general accounts, deals with the conflict between being a ‘white-trash kid’ and a ‘liberal intellectual’. His family did not have much money but they did have fun, his mother tells him, while Rensch came to owe $160,000 in student loans.

Rather than a characterisation in terms of physical or mental labour, he is keen to offer a material definition of class, based on ownership of resources: the capitalists control and allocate economic resources, while the working class have to sell their labour power in order to live. Even so, there are some unclear references to the middle class, which seems to consist of small-scale capitalists. Working-class life in the US has become increasingly pressurised: the minimum wage has nowhere near kept up with inflation, leading to widespread poverty. In 2016, around 30 percent of wage-earners had an annual income of less than $15,000. Credit cards are used to fund spending, resulting in total household debt exceeding total disposable income.

Some of Rensch’s friends died young, one through suicide at 33, one of a heroin overdose at 34. His father died after a fall, aged just 46: an unemployed widower with ‘nothing to his name but time’, who drank and gradually became less liberal in his politics (‘between losing his job to the economy and his [second] wife to cancer, my father had become a reactionary’). The difference between failure and (relative) success is often just due to luck.

In rural areas, there is very little rented accommodation available, hence the need to buy a house and the extent of predatory lending to enable house purchase; hence, too, the ubiquity of subprime lending and the resulting crash of 2008. It is hard for people to leave the rural US, as doing so requires considerable time and money, including having a reliable car so you can look for a job. In small towns, churches ‘provided a crucial sense of belonging’.

The book offers a well-told account of inequality and the lack of social mobility. Rensch acknowledges that he does not have an easy solution, though he does refer to ending the tyranny of wage labour. And ponder this: ‘admiring the beauty of poverty and despair is easier than trying to change it’.