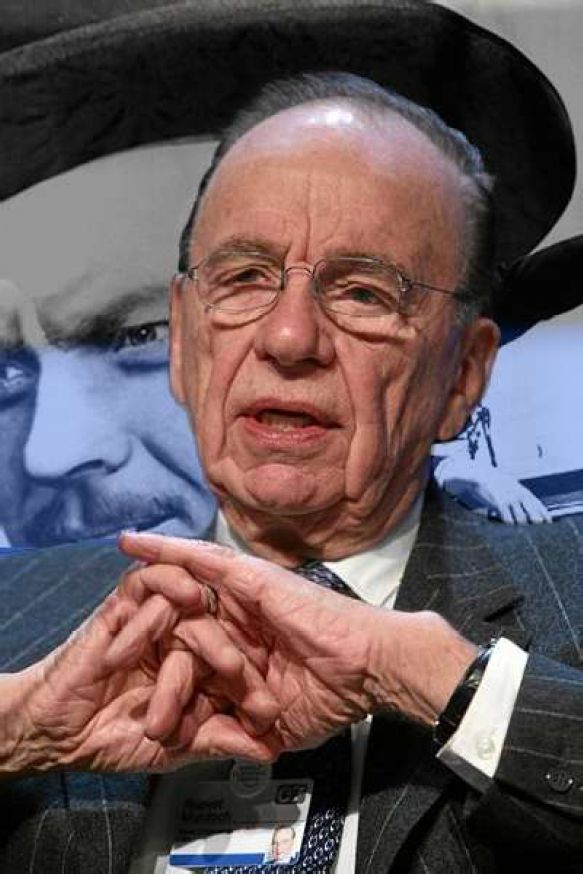 Tabloids and ruthless reporters pre-date Murdoch’s era by many decades.

Rupert Murdoch and his sleazy crew of phone-hacking journalists are easy to hate. But even if Murdoch’s media empire crumbles, other media moguls and conglomerates will simply pick up the broken pieces. And tabloid reporters will continue to write titillating stories about celebrities and crime with or without recourse to phone hacking. Murdoch, of course, is hardly the first to build up a newspaper empire. One way to put the current scandal in some historical perspective, is to watch two classic Hollywood movies: Citizen Kane (1941) and Ace in the Hole (1951).

In his film Citizen Kane, Orson Welles plays the role of newspaper owner Charles Foster Kane, who he models on the real-life tycoon William Randolph Hearst. The media empire that Hearst built, beginning in the late 19th century, bears more than a superficial resemblance to the present-day empire of Murdoch.

In the film we see the obscene amount of wealth and power concentrated in the hands of Kane and how he uses his network of newspapers to influence public opinion and politics, to the point of not only cheerleading for war (as Murdoch has often done) but even furnishing a casus belli for the Spanish-American War. Kane tells a correspondent, “You provide the prose poems, I’ll provide the war.”

Even the meddling of newspaper tycoons in politics seems, if anything, worse in the Hearst era as depicted in the film – or at least more blatant. Kane uses his newspapers to build up an image of himself as the people’s crusader, and then to launch his own political career, taking on the corrupt politician, Jim Gettys, in the gubernatorial election. His opponent is no chump when it comes to using the press either and beats Kane in the election by exposing his adulterous affair.

For all of its insights into the brutal reality of journalism, the film may give the profession more credit than it deserves. At times Welles seems to imply that Kane’s tragedy stems from his veering away from the muckraking journalism of his early years when he even exposed economic scandals that touched on his own business interests.

There is an interesting early scene in the movie where Kane, admitting that as a capitalist owner he is just another scoundrel, says his duty as a newspaperman is, “to see to it that decent hardworking people in this community aren’t robbed blind by a pack of money-mad pirates just because they haven’t anybody to look after their interests.” Kane thinks that the fact he has “money and property” makes it possible for him to play this role. And it is hard to tell whether Welles as director thinks that Kane could have looked after the interests of hardworking people, or whether he recognizes the absurdity of a man with “money and property” defending the interests of those who lack both.

Kane may not in fact be as split in two between good journalist and bad capitalist as he claims, for in the same scene he adds, “If I don’t look after the interests of the underprivileged maybe somebody else will, maybe someone without money and property.” This seems to imply that the split between Kane the stockowner and Kane the journalist corresponds to the difference between his narrow interests as an individual capitalist and his broader interests as member of the capitalist class—two different shades of greed. If this is a point Welles was trying to make, he was a bit too subtle for his own good.

Ironically, the campaign Hearst led to suppress Citizen Kane did more to expose the newspaper tycoon’s obscene influence on society than the film itself. Hearst did not succeed in physically destroying Welles’ film as he had tried to do, but he did use the full power of his newspapers and columnists to coerce movie theatres not to screen it.

A Wilder View of Things

The 1951 film Ace in the Hole, written and directed by Billy Wilder, centres on a character far lower on the journalistic food chain, the newspaper reporter Chuck Tatum (Kirk Douglas).

The film opens with Tatum arriving in Albuquerque, New Mexico and begging his way onto the staff of a local newspaper, The Albuquerque Sun-Bulletin. Tatum’s only hope at this stage in his career, after being fired from a string of newspaper jobs, is to chance upon some sensational story that will land him back at a big-city paper.

His opportunity finally arrives a year later when he is the first reporter to discover that a man, Leo Minosa, has been trapped inside an ancient Indian burial mound. Tatum is quick to realize that each day that Leo remains stuck is another day of exclusive reporting. To elbow out other tabloid sharks and drag out the rescue operation as long as possible, Tatum enlists the services of a corrupt sheriff up for re-election.

Tatum thus crosses the line between simply reporting a story and influencing how it plays out—all the while posing as Leo’s saviour and claiming, “I don’t make the news, I just report on it.” Tatum’s self-interested attitude disguised as compassion is no different from the outlook of today’s obnoxious reporters who feed on human tragedy.

Billy Wilder makes it perfectly clear that Tatum is no exception in the news racket by introducing other vicious journalists who almost make Tatum look decent by comparison. Tatum knows most of them by name from former jobs, and not one of them ever helped him when he was down on his luck. So when they plead, “Hey Chuck, we’re all in the same boat,” his icy response is that he is in the boat and they are in the water, “So let’s see if you can swim, buddies.”

Tatum knows the public’s appetite for “human interest” stories. He digs through the photo album of Leo Minosa to fashion a compelling profile and uses his skills as a writer to transform Leo’s estranged wife Lorraine into the picture of wifely fidelity because “that’s how the story reads best.”

Just as Tatum expects, the public eats up his story, even flocking to the site of the burial mound by the hundreds to take part in what has literally become a media circus, replete with amusement park rides and carnival performers. These onlookers are eager to believe that their own morbid curiosity and craving for entertainment actually constitute a sort of human compassion.

Wilder’s criticism cuts much deeper than the world of tabloid journalism and its readership. Tatum and the other reporters are not the only ones dazzled by money and power. There is Leo’s wife who wants to peddle enough hamburgers and Navajo rugs at her husband’s store to make her escape to New York, the young cameraman working with Tatum who is losing his innocence and dreaming of a world bigger than Albuquerque, the contractor beholden to the sheriff who agrees to the most time-consuming rescue method out of fear of losing his job, and all the carnies, musicians, and other riffraff who flock to the site to make a buck off the crowd. Even Leo, the victim, had gone into the cave in the first place to get his hands on some Native American relics to sell.

Money is the magic substance that brings together this crowd of strangers in the New Mexico desert, forming what a radio reporter there describes as a “new community” which has sprung up. But once the show is over and there is no more money to be made, this community dissolves in a matter of minutes. Leo’s “friends” take off in search of the next new thing, leaving behind his grieving parents.

Although minor characters, Leo’s parents are important: their love for their son contrasts sharply with the selfish and superficial human relations around them. In several scenes we see Mr Minosa refusing any payment from Tatum and others, mistaking them for his son’s saviours. And his devout wife is so lost in prayer for her son that she is almost oblivious to the obscene scramble for cash going on around her. Whenever Mr or Mrs Minosa enters a scene it immediately highlights how crass and downright bizarre the world of commerce is –a world where nothing is sacred, where everything and everyone has a price.

Setting the film in a part of the country where there are still traces of a pre-capitalist society is another way that Wilder makes our familiar money-centred world seem grotesque. The Native American rugs and pottery Leo had sold in his store were not originally commodities for the market but things for direct use or “sacred items” buried with the dead. What a remarkable contrast between that extinct society, where people had not been connected by money and the manic scenes of product peddling in the movie.

Tatum’s brand of journalism is perfectly suited to the money-mad society in which he lives. Wilder does present us with a character who might seem an alternative to Tatum: the upstanding owner of The Albuquerque Sun-Bulletin, Mr Boot, whose motto is “Tell the truth.” But Boot is only able to follow that motto by limiting his reporting to rather inconsequential local stories about soapbox derbies and rattlesnake hunts. When, later in the film, he says that he thinks the sheriff is corrupt and wants to expose him some day it does not sound convincing. A guy like Mr Boot has to stay in Albuquerque because he would not last a week in the cutthroat big-city newspaper business.

The films of Welles and Wilder and the past century of journalistic history are a warning to those who might think the end of Murdoch will mark some qualitative improvement in journalism. Take away Tatum, and another shark swims into his place: topple Kane’s empire, and another tycoon rises up. And the same will be true if Murdoch and his crew one day meet their demise. It is foolish to call for a reformed journalism but leave in place the profit motive that drives tabloid excesses.