Oh No, Not Again!

‘’Colombia was on edge on Thursday as the top peace negotiator for the country’s Marxist guerrillas announced that he was resuming armed conflict, promising to re-start the Western hemisphere’s longest-running civil war three years after a peace deal was signed’ (telegraph.co.uk, 29 August). Socialists welcomed the end of the five-decade-long war, which killed more than 220,000 and displaced millions, as well as the mendacious mass media calling FARC Marxist. But, bringing an end to one such conflict in a capitalist world where war and misinformation are endemic is like a murderous game of Whack-A-Mole. ‘Farc was formed in 1964 as a Che Guevara-inspired Marxist group claiming peasant land rights’ (op. cit.). FARC declare themselves to be Bolivarian and call for ‘Colombia for Colombians, with equality of opportunities and equitable distribution of wealth and where among us all we can build peace with social equality and sovereignty’, rather than for Marx’s call for workers of all lands to unite for the overthrow of all existing social conditions. Marx during his lifetime was implacably opposed to political terrorism. Marxist socialists oppose terrorism, individual, group or state, guerrilla ‘armies’ and so-called national liberation struggles. Instead we organise for and propagate worldwide common ownership, democratic administration, control of the land, means of production and transportation and the abolition of the wages system.

‘Of course, there are other reasons why the West cannot get any of its adversaries to kneel. One is – that the toughest ones are left. Russia, Cuba, China, North Korea (DPRK), Iran, Syria and Venezuela are not going to run away from the battlefield’ (Suddenly, Western “Regime” Changes Keep Failing, off-guardian.org, 28 August). Andre Vltchek’s and others of his ilk continuing support for one group of capitalist countries is no doubt of great comfort to the imprisoned trade unionists in Iran, for example. Sadly it comes too late for the many thousands who have already been executed, including minors, under a theocratic dictatorship where those convicted of adultery, alcohol consumption, blasphemy, burglary, homosexuality, pornography and prostitution, along with, of course, political dissidence, as well as many other ‘crimes’, can pay the ultimate price. We must not forget the state sanctioned use of juveniles as troops during the mass slaughter that was the Iran-Iraq war or oppression of women. Add chronic corruption plus obvious class division and we can say the 99 percent certainly did not vote for this. No war but the class war!

In Space as on Earth 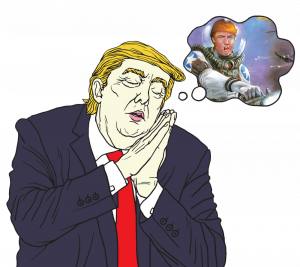 has become a focus for the Trump administration due to concerns over the vulnerability of US satellites to China and Russia’ (news.sky.com, 30 August). Long before the first aeroplane flew or mining the Moon’s riches left the realm of science fiction, British politician Joseph Chamberlain made this candid comment with regard to war and its economic causes: ‘All the great offices of State are occupied with commercial affairs. The Foreign Office and the Colonial Office are chiefly engaged in finding new markets and in defending old ones. The War Office and the Admiralty are mostly occupied in preparations for the defence of these markets and for the protection of our commerce’ (from a speech to the Birmingham Chamber of Commerce in 1890). Time and time again evidence has demonstrated that war stems from capitalist struggles for markets, trade routes, sources of raw materials, and places of strategic importance.

If we want a future that is more Star Trek than Star Wars, we must first replace capitalism with socialism and bring about a world where war, wages and want have been eradicated. Given this it is somewhat surprising to find a Financial Times journalist describing Star Trek: The Next Generation as ‘...optimistic, moving and wise’ (ft.com, 28 August). Whether or not you prefer the post-capitalist society of Trek or Iain Banks’ Culture over the bucolic, craft-industry-based utopia of William Morris’ News from Nowhere (1890), our first concern should be the making of socialists. Morris put it well: ‘one man with an idea in his head is in danger of being considered a madman; two men with the same idea in common may be foolish, but can hardly be mad; ten men sharing an idea begin to act, a hundred draw attention as fanatics, a thousand and society begins to tremble, a hundred thousand and there is war abroad, and the cause has victories tangible and real; and why only a hundred thousand?’ (Art Under Plutocracy, 1883).