‘king’ Boris: The Wages of Duplicity

Boris, the indefatigable, is crowned King 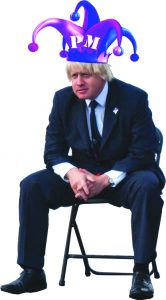 After each of Boris Johnson’s many gaffs and indiscretions one imagines that he must finally be dead and buried politically, yet he rises from the grave like a zombie in a B-Horror movie. Now he has achieved his life-long ambition and been crowned premier by a reluctant rag bag rump of a Tory Party; the blue rinse and blazered clan of London and the Home Counties, such is the quirkiness of our democracy. It was never going to be that other zombie, in the form of Jeremy Hunt. He simply lacked the star quality and celebrity which is essential for high political office nowadays.

So, it has come to pass that Alexander Boris de Pfellel (I think that’s pronounced piffle) Johnson, an Old Etonian who studied classics at Balliol College, Oxford and was a distinguished member of the Buller!… Buller!…Buller! Bullingdon Club, with all its spectacularly lurid debauchery, is the UK’s new premier.

Is he the right man for the job? His career has to date included Member of Parliament, Mayor of London and journalist; the assessment of his efficacy in these roles has ranged from undistinguished to catastrophically incompetent. His main claim to fame is his disingenuous campaign to take the UK out of the EU – £350 million a week extra for the NHS etc – and now his promise to deliver Brexit, come rain or shine, upon the witching hour of Halloween this October.

The testimonials as to his character are almost universally damning. Boris de Pfellel Johnson has been variously described as a: popinjay, lazy, feckless, dishonest, narcissistic, racist, homophobic and lacking in imagination; such moderately pejorative descriptors coming predominantly from his friends and colleagues. Those more hostile to Boris Johnson invariably express their opinions in a more strident manner. One such example being ex-Tory MP Jerry Hayes who summed up Boris as a: ‘copper-bottomed, double-dealing, hypocritical little shit’ (https://www.jerryhayes.co.uk/articles/boris-is-a-copper-bottomed-double-dealing-hypocritical-little-shit-the-press-will-destroy-him). Whilst this vitriol is often intended to demonstrate Boris’s unfitness for high office it seems it does the opposite. If the number of similar incumbents around the world is anything to go by such sociopathic/psychopathic tendencies provide him with impeccable credentials for premiership.

Some people have couched their reservations about him in more practical terms, citing the difficulties that Boris will have in working with the business community following his retort ‘fuck business’ whilst Foreign Secretary when confronted with business concerns regarding Brexit; or the vulnerability of the Special Relationship given Boris’s former description of Donald Trump as: ‘clearly out of his mind… portraying a quite stupefying ignorance that makes him quite frankly unfit to hold the office of President of the United States.’ But all this hot air and hyperbolic rhetoric will be water off a duck’s back in the pragmatic relationship of politics. For all the bluster The Boris and The Donald are soul mates. Their respective utterances are indistinguishable without attribution. Boris’s comment, comparing women wearing burkas to letter boxes and bank robbers, could just as well have come from Donald Trump; along with many similarly asinine remarks. Both men share a common penchant for pussy-grabbing, each with his idiosyncratic style. They are like peas in a pod, ideally suited to the bear-pit, come cesspit, of modern-day celebrity politics; adept at pedalling their particular brand of snake oil. They will get on famously so long as realpolitik or self-interest doesn’t get in the way.

What is Boris likely to achieve in office?

So what should we expect from the UK’s new Prime Minister? Boris Johnson’s unique achievements as premier are more likely to be in chairing the satirical BBC programme: Have I got News for You, or becoming the winning contestant on ITV’s reality dating show: Love Island, rather than solving the environmental crisis, averting wars, or ending world poverty.

To the extent that Boris has set out his stall he has said that he will slash taxes for the rich and for corporations; create more tax- and customs-free zones – effectively creating more legalised tax evasion enclaves – and sprinkle a few billion pounds around on vanity infrastructure projects, similar to when he was Mayor of London; topped with the obligatory rhetoric of: tough on immigration and tough on crime. Nothing surprising there then!

Beyond these fatuous policy sound-bites Boris attempted to introduce some intellectual gravitas to his campaign by penning a tediously long article in the Daily Telegraph recently (30 June) where he wittered on about liberalism without really getting to the nub of anything. It turned out that the main purpose of the article was to engage in that popular Western pastime of Putin-bashing whilst trumpeting the UK as an exemplar of thriving liberal democracy; an accolade Boris warns the UK will forfeit if it fails to exit the EU on the 31 October 2019. It will no doubt be a relief to many that, like a Catholic reaffirming the faith, all will be well with liberal democracy once Brexit is a done deal.

If it were someone, other than Boris, would it make any difference?

If it had been Jeremy Hunt, or any of the other non-entity candidates as premier, then it would have been much of a muchness; the usual mendacity and venality would predominate in the execution of the role of chief operating officer, at the beck and call of the capitalist class, under cover of ‘democracy’.

What if, as some pundits have postured, Boris’s incumbency prompts an early general election? If Labour get in it may well be led by someone other than Jeremy Corbyn – given that few currently seem happy with him – in which case a new New Labour is likely to amount to a Tory-lite government and therefore business will be as usual. But what if, horror of horrors, that supposed Communist, Trotskyist, Leninist, Marxist, Putin apologist, racist, anti-Semite, allotment-gardening Corbyn gets into No 10 after all? The Establishment have already laid their contingency plans in the form of a recalcitrant civil service. One retired general has mooted if needs be, a military coup, mainly premised on the treasonous conduct of Corbyn in refusing to unhesitatingly commit to pressing the nuclear button to render all life on the planet extinct.

But in any case an acclaimed radical Corbyn-led government is unlikely to prove to be radical in practice. The approach of John McDonnell, the Shadow Chancellor, is more akin to Roosevelt than Marx. Despite his declared wish to get rid of capitalism he cautions the need to move slowly to a system of common ownership to avoid the risks; the structural vehicles for such transition comprising variations of traditional state and worker ownership and modest proposals for industrial democracy. Leaving aside the efficacy of such structures, it is hard to understand why John McDonnell considers such measures will work within a capitalist system which inevitably neutralises and/or reverses any minor social gains that threaten its basic ability to make profits. As can be seen by such attempts in the past any changes in wealth and income distribution or improvements in social provision for the working class, are quickly clawed back when the time is right. Given the rampant, uncompromising and unrestrained hyper-capitalism of today and the increasing concentration of power in the hands of the capitalist class it seems unlikely that it will be inclined to make any concessions at all but instead is likely to double down in its quest to squeeze every last bit of surplus value from humanity and the planet, irrespective of the catastrophic consequences.

Gradualism, incrementalism, reformism – whatever one chooses to call it – has proven not to work time and time again. If one fails to confront the fundamentals of the antagonistic relationship between the working class and the capitalist class then politics will continue to go down such blind alleys; the conflicting relationship manifesting itself because of the appropriation by the capitalist class of the wealth that has been produced by the working class.

If meaningful change is to be achieved this inherent conflict must be addressed head on. Socialism provides the means by which this can be done providing that the imagination of enough people can be ignited in order to visualise it and then to act to bring it about; creating a society where the means of producing the things needed to live a good and satisfying life are owned and controlled by everyone and distributed for the benefit of everyone. In contrast to the situation now under the defective system of capitalism, where production solely for profit creates false scarcity and thus destroys and impoverishes the lives of the majority of people in the world and, as we now know, jeopardises all life on the planet.

To imagine a different world is a difficult task; a socialist world without war, without privation; an equal and inclusive and socially and materially enriching society in harmony with the natural environment. It is the task of those who can already conceive of such a society to spark that same imagination in the minds of others and to collectively sustain such imagination by continual exploration of the practical constituents of a socialist society in order to create the conditions to bring it about.