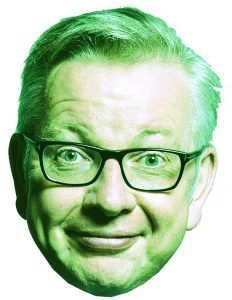 (forced by a new tell-all book) that he had done multiple lines of coke while as a journalist writing an article demanding tougher laws to stop the cocaine trade. The sheer Class A hypocrisy of this got right up everybody’s nose, as you would expect, so it seemed like poetic justice that he should be hoist on his own petard. It is truly a shocking thing to discover that politicians say one thing and do another. Who would have guessed?

But soon it emerged that virtually all of the Tory leadership frontrunners had indulged in one or more illicit drugs. Bojo snorted coke, but said he thought it might be icing sugar (imagine having a Prime Minister with his hands on nuclear codes who can’t even tell cocaine from icing sugar). Matt Hancock, Esther McVey, Andrea Leadsom and Dominic Raab all smoked weed although presumably not all at the same orgy. Jeremy Hunt had a cannabis lassi (jeez, what Indian restaurant does he go to and how can we book?). Not to be outdone on the exotic stakes, Rory Stewart smoked opium at an Iranian wedding. Most people would have settled for a slice of cake, Rory.

The fact that to date eight out of ten Tory leadership candidates had done illicit drugs tells you everything you need to know about how the ‘war on drugs’ is really progressing. Nobody, not the press, not the police, not even the Tory bigwigs who have imposed it on the rest of us, takes it seriously anymore.

Of course they all swore they hated the experience and that it was a terrible mistake. But this is surely wrong. Taking a drug is just a lifestyle choice. Taking a drug and then turning into Boris Johnson, now that’s a mistake. But then again, just look at the politicians who (claim they) haven’t taken drugs. Mark Harper anyone? Who he, you ask? Exactly. Sajid Javid? Well, the mesmerizingly handsome Home Secretary will only admit to the odd cigarette, but nobody could be that urbane, charming and charismatic and not be on something. Nigel Farage? He’s enough to make you take drugs.

When rapper Professor Green went to the House of Commons for a BBC documentary and asked former LibDem leader Nick Clegg why politicians never wanted to discuss drugs and legalisation, Clegg responded that the matter wasn’t deemed important enough (https://bit.ly/2IvbxUg). Doubtless the LibDems didn’t think it was important either but, desperate for any stray votes, Clegg happily spoke in favour of legalisation. Now that they’ve had something of a renaissance in the Euroelections owing to being the worst major political party in the UK apart from all the others, they might decide to roll back on that particular commitment.

Nowadays you can hardly walk through any inner-city street in the UK and not smell weed blowing in the wind. This will be all the young people trying to get high and forget how their future is being wrecked before their very eyes. Or else it’s young people doing what it takes to be the next local Tory candidate. Skin up, anyone?