Huawei: Is it really just cybersecurity? 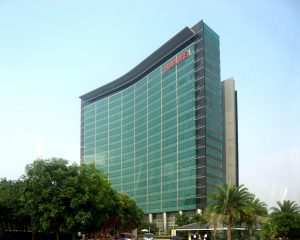 Competition for markets, sources of raw materials and the control of strategic routes is the lifeblood of capitalism. This competition inevitably translates into rivalry between nation states, which serve the capitalist interests within their borders. Trade wars ensue with all the skulduggery that governments can muster and can lead to bloody conflict. We have seen this in the twentieth century, where rivalry between an expansionary Germany and the established powers, Britain, France and Russia gave rise to two world wars.

After the Second World War, the United States and Russia emerged as the dominant powers and both competed to control global markets. This ‘cold war’ continued until the collapse of the Soviet bloc in the nineteen-nineties. As nature abhors a vacuum, so it is with capitalism which cannot survive for long without some kind of international rivalry taking place. We have recently witnessed a resurgent Russia challenging the Western capitalist powers. China is also emerging as a global economic player in world markets. The response of the American state has been to slap increased tariffs on Chinese imports and China has retaliated in kind. Huawei, China’s leading technology company, has become a focal point of this trade dispute.

Founded in 1987, Huawei supplies telecommunication equipment and sells electronic gadgets including smartphones, tablets and laptops. It employs about 188,000 staff worldwide and operates in more than 170 countries. It is a leading provider of 5th generation (5G) technology. This is the next generation of wireless technology which will deliver much faster download speeds for mobile phones, and promises greater connectivity between devices allowing for the emergence of driverless cars, ‘smart’ homes and driverless drones. The company has helped to build IT systems and infrastructure in Africa, Russia and other countries. It claims to be a private company owned by its employees.

However, many, including the United States government, dispute this and insist that the company is controlled by the Chinese government, and that its products contain ‘backdoors’ to allow the Chinese state to carry out surveillance and cyber attacks. That the founder, Ren Zhengfei, was a member of the People’s Liberation Army at the time of the company’s foundation and has links to the Chinese Communist Party is held as proof of this. Others point to the 2017 National Intelligence Law which requires Chinese companies to assist the state in their intelligence investigations and that every Chinese company is required to have a Communist Party Committee. Huawei played down these links and insisted that it is an independent company dedicated to serving the needs of its customers. In January 2018, allegations emerged that, over a period of five years, data was being transferred from the computer systems of the African Union headquarters in Addis Ababa, Ethiopia to servers based in Shanghai. Huawei was the main supplier of their information and communication technology systems. The company denied any culpability. It is also accused of intellectual property theft from other tech companies, including Nortel, Cisco Systems and T-Mobile. In the latter case, a Huawei employee allegedly stole a robotic arm used for stress testing smartphones.

Whatever the truth of these allegations, they were the pretext that the US state need to have Huawei in their crosshairs. On 1 December last year, Meng Wanzhou, the company’s Chief Finance Officer and daughter of the founder, was arrested in Canada in Vancouver at the behest of the US authorities and is facing extradition to the US on charges of defrauding banks and using a subsidiary to break sanctions against Iran. On 15 May Donald Trump signed an executive order barring US companies from employing foreign telecommunication equipment that is deemed to pose national security risks and the US government added Huawei to the list of companies that require a licence to trade with US companies. Google responded by suspending dealings with Huawei, so their smartphones will not be able to receive updates to Google’s Android operating system. The US government has urged other nations not to use Huawei products. In a sense they should be worried, as Edward Snowden has revealed, that both the US and UK states have used internet technology to spy on other countries.

However, this is more than about protecting vital IT infrastructure. John Naughton noted (Guardian, 2 June) that targeting Huawei’s smartphone and laptop businesses has little to do with IT network security. Technology is the key to global commercial success, and the US capitalist class are jealous of safeguarding their dominance in this field. They don’t wish to see their technology corporations such as Microsoft Apple and Google being overtaken by Chinese companies such as Huawei. What the US state also fears is that Huawei’s and other Chinese companies’ successes in the global marketplace will pave the way for Chinese domination of the global capitalist economy. The fact that Donald Trump appears to be using the fates of Meng Wanzhou and Huawei as pawns in trade negotiations with China appear to bear this out.

This dispute is generally seen as the work of Donald Trump playing the tough guy and is trying to impress his electoral base. But the American ruling class have been worried for some time about the rise of Chinese capitalism. It is not just the Republicans, but many Democrats support taking a strong stance against China. However, things are not as straightforward as they seem. US companies that trade with Huawei will be adversely affected. Many US technology companies, such as Apple, have their products, such as their iPhones, assembled in China (so much for their concern for cyber security).

The stance of British capitalism is more ambiguous. Although the British state shares the worries about security issues and are wary about the rise of Chinese capitalism, nevertheless they are interested in developing closer economic ties with the latter. This will be particularly important if the UK leaves the EU. The government is also keen to build its 5G infrastructure as soon as possible, so as not to fall behind British capitalism’s competitors, which could have a negative economic impact. As Huawei has the expertise and can do the job efficiently and relatively cheaply, the UK government is considering engaging it in its 5G infrastructure project. However, not all government members are happy at such co-operation with Huawei, as the recent leaking of a National Security meeting showed. The US government has threatened to withhold sharing intelligence should the UK government so ahead with these proposals. The Chinese government has threatened to pull out some of its UK investments if the UK caves in to US pressure and not approve the deal with Huawei.

As always, workers will be called on to take sides. Patriotism will be invoked on both sides, 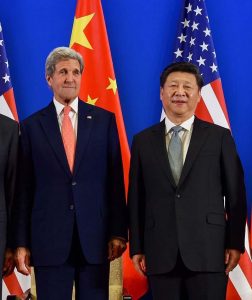 and in the West this dispute will be portrayed as a struggle between democracy and an authoritarian state. This is nothing of the kind, it is just a squabble between rival groups of capitalists. The working class, both in China and the West, have no interest in this trade war. Their real interest is to establish a global socialist society of common ownership where there will be no nation states and everyone will have free access to the world resources.