Understanding why people come to have far right views is an important part of fighting against the movement and its sickening ideology. Nationalists and racists aren’t born that way, so their beliefs must come from how they interpret the world around them. Not many of us would want to spend a week living with a far right activist to find out what makes them tick, though. So we should applaud the efforts of broadcaster Alice Levine, who did just that for Channel 4’s Sleeping With The Far Right.

Alice goes to stay with Jack Sen, whose opinions are extreme enough to have got him pushed out of both UKIP and the BNP. He lives with his wife, daughter and mother in a suburban street in Southport, Merseyside, an area Sen likes because it hasn’t changed much over the years. Not long after the cheery greetings, Alice finds out that the household has a 7pm curfew because of supposed death threats against them. And Sen’s opening diatribe about how he wanted to run as Mayor of London with openly racist policies (‘mass immigration should stop … Then you can at least sit down and formulate some sort of policy’) gets interrupted by his mother offering a nice cup of tea.

Alice’s first morning involves joining in with the family’s exercise routine, then sitting with Sen as he posts online criticisms of Winnie Mandela, signing off with ‘warmest regards’. Next, Alice goes for a walk with his wife Natasha, and they chat about her belief that only non-white men commit rapes. Later in the week, Sen takes Alice to Southport town centre for a meeting of other far right activists, which he says will be ‘good fun’. They’re a bunch of embittered middle aged men who claim they’re not racists because Sen’s ‘foreign’. They’re involved in ‘guerrilla warfare’, which includes writing ‘Labour paedophiles’ on a roadsign and making placards with snappy slogans like ‘Protect our kids by banning Islamic and rainbow flags’. Sen’s politics have a wider and more dangerous reach, however. Among his other cohorts are a former Grand Wizard of the Ku Klux Klan and fellow ex-BNPer Nick Griffin. Alice’s visit turns sour during a video call to Griffin, who is working with Sen on a programme about ‘racism against whites’ for some hate-filled internet radio station. They turn on her and absurdly, and without seeing the irony, accuse her of being a bigoted extremist. After an awkward photo shoot, Alice’s visit is wrapped up. 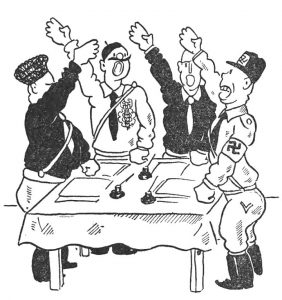 Sen was a member of UKIP and stood as their candidate for West Lancashire in the 2015 general election. Just before polling day he was expelled from the party for tweeting that the Labour candidate, who was Jewish, would ‘send the £ to Poland / Israel’, although his profile on Amazon states that he left because of ‘his honesty, and attempting to broach the subjects of indigenous displacement in Britain and British cultural suicide’. He was later quoted as saying that UKIP was ‘in the pockets of Jewish special interest groups’. After joining and leaving the BNP (who aren’t right wing enough for him), he went on to set up the fortunately-insignificant British Resistance Party and the British Renaissance Policy Institute. To spread his abhorrent views, he runs over 25 Facebook pages and websites, using cheap tricks to get attention. On his websites he interviewed himself using another name and ‘leaked’ the interview to newspapers when he was running for election. And to try and discredit those who disagree with him, he pays to have his articles criticising them bumped up on Google searches. Alice is worried he’ll do that to her if he doesn’t like her film.

Sen’s background isn’t one which we might expect a fervent nationalist and racist to have. Born in Britain to a half-Indian and half-South African father and English mother, he spent his late childhood in America before returning to Britain and marrying a Ukrainian. His cosmopolitan upbringing didn’t make him more open-minded, though, and instead he says he felt like an outsider in a multi-ethnic society. Sen’s wife Natasha has similar views to him, although she says that her beliefs developed because she grew up somewhere which wasn’t diverse. That they have come to far right ideology from different directions suggests that our background in itself doesn’t dictate our beliefs, but our perception of it is what’s important. Sen grew up feeling like an outsider, and allowed this to shape his blinkered, paranoid view of his identity. Like all on the far right, he fixates on the differences between people, and sees them as a threat. So he tries to find a sense of security by latching on to nationalism and racism, and defining himself by who he hates. In that way, he’s like any fascist. Unlike the stereotype of a far right thug, though, Sen is articulate and media-savvy, hence his 25 websites. He’s got more exposure through Sleeping With The Far Right, of course, although its insights into his repellent mindset presumably wasn’t the kind of publicity he wanted.