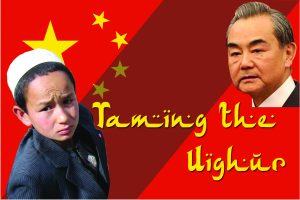 Back in September 2014, we carried an article on the Chinese government’s persecution of the Uighurs, a Muslim minority (worldsocialism.org/spgb/socialist-standard/2014/2010s/no-1321-september-2014/material-world-chinas-wild-west/)

The Uighur are more akin to the Turkic peoples of Kyrgyzstan and Kazakhstan, than to the Han Chinese. Following a policy conducted in Tibet, China has promoted the mass migration of Han Chinese into Xinjiang – the autonomous region in western China, home to approximately 11 million Uighurs, with the effect of trying to reduce Uighurs to a minority on their native land, pre-empting any possibility of independence that many Uighurs seek.

In August 2018, the UN Committee on the Elimination of Racial Discrimination voiced ‘deep concern’ over the situation facing Muslims who were being treated as ‘enemies of the state’ and held in secret ‘re-education’ camps. The Chinese Human Rights Defenders reported that a fifth of all 2017 arrests in China were made in Xinjiang. According to a Human Rights Watch report, the detention centres are located in specially-built facilities or converted government buildings where detainees are held, unlawfully and without charge, as a result of religious ‘offences’ such as excessive praying or non-religious acts such as accessing proscribed websites or contacting overseas relatives. Other aspects of the security crackdown include all-encompassing social media surveillance, mass deployment of police and severe regulations against religious practices and dress.

Inmates at those gulags are forced to criticise their own Islamic beliefs and sing Communist Party propaganda songs for hours each day and give thanks to the ruling Communist Party. They are compelled to shave their beards and have been forced to eat pork and drink alcohol. Former detainees described beatings and deaths despite authorities’ tight control of available information. Likewise, the government also operates orphanages for Uighur children taken from their parents, in a process to disconnect them from their ethnic heritage, a punitive policy targeting indigenous peoples seen all across the world at various times in history.

China is an economic superpower which the world relies on heavily for trade and there are signs that economic factors are the reason deterring diplomatic protest or humanitarian intervention from the rest of the world. Many states including Islamic ones fear the economic consequences and possible retaliation they could receive if they challenged or sanctioned China for this blatant ethnic cleansing of the Uighur people. China has invested $62bn in the construction of the China-Pakistan Economic Corridor (CPEC), which will connect Kashgar in Xinjiang to the southern Gwadar port in Pakistan. Despite Pakistan highlighting the plight of Muslim minorities, when it comes to Uighurs, Islamabad protests are muted.

‘It’s quite striking that while Pakistan often laments the plight of Rohingya, Syrian, Kashmiri, and Palestinian Muslims, you rarely hear Islamabad making statements in solidarity with Uighurs’, according to Michael Kugelman, deputy director of the Asia programme at the Wilson Center. He says ‘The Muslim world on the whole, with a few exceptions, has taken a position of studied silence because of a desire not to upset a key global player that offers investments and other useful benefits’.

Particularly revealing were the comments from Saudi Arabia’s Crown Prince Mohammed bin Salman who, on his recent visit to China, voiced support for China’s campaign against ‘terrorists’ and its ‘de-extremization’ camps. Did we really think that China or Saudi Arabia would allow some Uighurs to get in the way of Saudi Aramco’s $10 billion deal for a refining and petrochemical complex or the signing of 35 economic cooperation accords worth $28 billion? Chinese-Saudi trade reached $63 billion in 2018. As long as economics matter, the Uighurs will not likely find an ally in Saudi Arabia.

Turkey has been the only majority Muslim country to criticise China, with the Turkish foreign ministry calling China’s treatment of Uighurs ‘a great cause of shame for humanity’.

China is able to disguise anti-Uighur actions under a cloak of the global ‘war against terror’ to counter and de-radicalise Islamic fundamentalism. China is taking advantage of the global trend to weaponise Islamophobia to drive its racist programme of state-sponsored Han dominance.

China’s Foreign Minister Wang Yi justified the ‘re-education camps’, stating, ‘the efforts are completely in line with the direction the international community has taken to combat terrorism … if we can take care of prevention, then it will be impossible for terrorism to spread and take root’.

Other government officials defended the forced detention claim that Islam is an ideological illness, depicting the camps as more like hospitals to ‘cure’ people from the Muslim infliction. China’s ambassador to the USA, Cui Tiankai, stated that the country is trying to turn the Uighurs into ‘normal people’. China is instituting the very same calls made by some Western politicians to criminalise expressions of Muslim identity such as the wearing of hijabs in an effort to heal Muslims of their ‘sickness’.

Maya Wang of the Human Rights Watch campaign explained that while authorities claimed the camps were about combating terrorism and separatism, they were in fact designed to assimilate Uighurs. Amnesty International described the detention centres as comparable to ‘wartime concentration camps’.

The Socialist Party is fully conscious of the sufferings of many of our fellow-workers and we wish to promote a kaleidoscope of cultures but candour compels us to point out that only the abolition of capitalism and the establishment of socialism can put an end to national chauvinism and race prejudice.