What is happening in Venezuela? 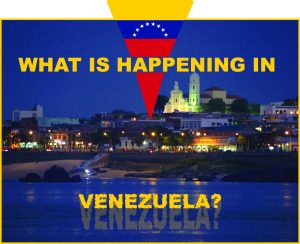 On 23 January the president of the Venezuelan National Assembly, Juan Guaidó, declared himself ‘Interim President’ of the Bolivarian Republic of Venezuela, denouncing the elected President Nicolas Maduro as an illegitimate dictator. The US government immediately announced its support, followed by a declaration from the Group of Lima, which is an institution embracing several countries of Latin America, all supported by the US government. Canada and a number of European countries also declared their support for Juan Guaidó. They all asked Maduro to step down or face imprisonment in Guantanamo Bay.

The US government, Juan Guaidó, Canada and the European countries indicated that they were supporting the interim government on the grounds that Maduro was a dictator who has reduced Venezuela to a situation of hunger, unemployment, repression, corruption, and lack of freedom. They asked him to call a fresh presidential election in eight days. In response, the government of Venezuela decided instead to call for a new election to the National Assembly, while the Supreme Court of Venezuela declared the self-proclaimed Interim President illegal.

The popularity of Nicolas Maduro has decreased since he was elected due to the government’s authoritarian measures and corruption. Others blame him for the economic and political crisis and the violence that exists in the country. Many workers have taken to the streets to protest against his government. During the last presidential election other candidates did not participate and there were a large number of abstentions.

Since the election of Hugo Chavez in 1999, the Venezuelan government has been opposed by the US and sections of the capitalist class in Venezuela, but during his initial period he had the support of the majority of the Venezuelan workers and most of the governments of Latin America. His popularity was so high that in 2002 the US was forced to back away from a coup d’état that they had orchestrated with certain sectors of the military forces.

Due to the then high international price of oil – which is the country’s main source of income – and as a member of OPEC, Chavez was able to implement certain social reforms, such as housing for the poor, medical services, educational programmes and a food programme. The level of poverty of the country decreased. And all these measures were considered by his supporters to be the implementation of socialism by the Bolivarian Revolution, or so-called Socialism of the XXI Century.

Chavez also helped create many cooperatives around the country and expropriated several corporations and turned their assets over to state ownership; others became joint ventures. Oil and gas were sold to China at a lower cost to compensate for the cost of transport and to penetrate the Asian market, and several agreements were signed with the Iranian government. Oil and gas were sold at low cost to the Cuban government in exchange for medical services using Cuban-trained doctors.

Social conditions in Venezuela have since deteriorated enormously due to a drop in the oil price and the embargo and sanctions imposed by the US, and also due to the largely state capitalist mode of production – which is the real system of production that exists in the Venezuela.

The US and Canada will also have their eye on the large deposits of oil and natural gas, and also on the oil and large deposits of minerals that exist in the Orinoco Belt, such as lithium, nickel and iron ore. Several of these resources have been given to the Russian and the Chinese corporations, and the ecological impact in that region has been enormous.

The US government has indicated that all options are on the table including military intervention. The government of Venezuela has responded saying that it might turn into another Vietnam and has called for a dialogue including the members of the National Assembly. All have refused to have a dialogue with Nicolas Maduro, and the US government has frozen all Venezuela’s international accounts and sources of income; they have taken over Gitco which is Venezuela’s international petroleum corporation situated in the US, and Britain has held back $550 million of gold that the Bank of England had been keeping in trust for the Venezuelan government. In addition, the US is going to transfer all the oil proceeds – more than $7 billion – to the interim president. According to some economic statisticians, the loss from the embargo on Venezuela has cost the country more than $350 billion in total.

Due to the measures taken by the US government against Venezuela and the implementation of new sanctions, the Venezuelan government is going to transfer all the proceeds of their oil sales to a Russian bank in Moscow as Russia has lent more than $50 billion to Venezuela in military aid and for mining. China has lent more than $60 billion in exchange for oil. Both countries have opposed the actions of the USA at the United Nations and have indicated that they reject the new government and support Maduro as president.

A possible military confrontation with the US and alliances of military forces of other Latin American countries, such as Brazil, Colombia and Argentina, against Venezuela would become a very bloody battleground, due to the fact that all the armies have been heavily armed by the US, Russia and China, and most of them have modern armaments. It would be a war where many class brothers and sisters would kill each other defending one or other side in the conflict.

Since the very beginning when Hugo Chavez was elected President of Venezuela and declared himself a socialist, we have shown that he was just a left reformist, not a revolutionary socialist, and that socialism cannot be introduced by a leader in the name of the working class, by implementing reforms within the framework of a capitalist society and nationalising enterprises to be run by the state apparatus. We added that the problems that Venezuela was confronted with and its failures could not be blamed on socialism because a form of state capitalism was the economic model that was going to be established by the leaders of the Bolivarian revolution; that Chavez, Fidel Castro, Peron, Cardenas, and other Latin American leaders were bourgeois nationalists who were opposed to the influence and domination of the US ruling class in the region. They wanted to expand their own markets and capitalist interests there, as was reflected by engagement with Mercosur which is a Latin American version of the European Market, by the Bank of the South, a Latin American version of the IMF, and showcased by the Cooperatives in Bolivia which are joint ventures between the state and the peasants of Bolivia based on a capitalist mode of production and run as typical capitalist corporations.

The USA and its president have used the crisis in Venezuela as a pretext to blame its problems on socialism and to attack the emergence of socialist ideas within the youth and some sectors of the US working class. Both are confusing social democratic reforms with socialism such as: Medicare for all, increase of taxation on the rich, better housing conditions for the poor, elimination of inequality, renovation of the country’s infrastructures, more state regulations, and better programmes for the elderly and the veterans. Most of these measures were implemented by Roosevelt’s New Deal during the Great Depression and none of them are an indication that socialism was established in the USA.

For many years the Socialist Party of Great Britain and its companion parties,

including the World Socialist Party of the US, have established a clear distinction between social democratic reforms, state capitalism, and socialism. Our aim is socialism-communism as a post-capitalist world society based on the common possession of the mean of production administered democratically, which is a stateless, moneyless, wageless society of free access to available wealth. This cannot be established by a leader, or a vanguard party acting in the name of the working within the framework of the capitalist mode of production; capitalism is an economic system which cannot be reformed to work in the interest of the workers.

Whatever is taking place in Venezuela has nothing to do with socialism or communism, and all the failures of the Bolivarian Revolution, its leaders and the so-called United Socialist Party of Venezuela, cannot be blamed on socialism or communism. Venezuela is a capitalist society where workers are economically exploited to produce surplus value and are wage slaves like in any other capitalist country, as in all other parts of the world. It is a state-run capitalist system similar to the ones established in the former USSR, Eastern Europe, China, Cuba, North Korea and Vietnam adapted to their local circumstances.