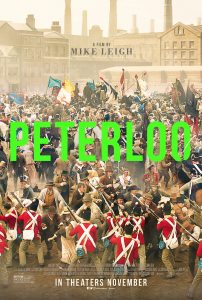 The film depicts the events in St Peter’s Field, Manchester, in 1819 where, under the instructions of the local magistrates and with guidance from the bigwigs at Westminster, the cavalry rampaged through the 60,000 strong crowd of men, women and children with sabres drawn, killing 15 and injuring between 400 and 700 of those who were peacefully protesting their lack of political power and general privation.

Mike Leigh grew up in Salford, very close to St Peter’s Field, and says that the project arose from his personal resentment that he was never taught about the event in school.

In Mike Leigh’s exuberance to inculcate the importance of Peterloo he has reduced the film to burlesque. It was almost like watching a pantomime, with the wicked witch as the evil British Establishment on the one hand and the stoic downtrodden working class on the other. The stereotyping even extended to the geography, with everyone up North a: by gum, honest hard-working salt-of-the-earth type and everyone down South an opulent decadent popinjay. In his self-imposed obligation to accurately portray the history (apparently he researched it for four years) Mike Leigh seems to have forgotten the importance of building meaningful characters and weaving them into an entertaining story.

The only character portrayed with a degree of nuance was the orator Henry Hunt, (Rory Kinnear). Of the others there were too many and they were one dimensional.

It would be fair to describe the reviews as ‘mixed.’ Some lauded the cinematography of Dick Pope, who is a frequent collaborator with Mike Leigh. Others applauded the film’s historical accuracy. Some reviewers bemoaned the fact that the film ended on such a bleak note of the massacre; presumably trying to breathe life into the moribund notion of the Whig view of history, that of inexorable human progress. Some ‘Guardian type’ reviews drew sombre parallels with today, encouraged by Mike Leigh’s statement that the film highlights the ‘have and have nots’ and thus has some contemporary relevance.

Peterloo was undoubtedly an event worthy of historical note. But not what Maxine Peake (who played Nellie in the film) exclaimed  at the premiere in Manchester: ‘Peterloo was an outrage of which humanity recoils with horror and which is a foul stain upon our national character.’ I assume by ‘our national character’ she is referring to the British Empire which, for more than 200 years, subjugated a quarter of the world’s population by mass murder, torture, starvation and other nefarious means.  For me this is the film’s most egregious characteristic. It elevates this episode of violence to a degree of  disproportionate importance. By depicting Peterloo as an aberration, out of character with British values, it obscures the reality that this was business as usual, at home and abroad, then and now. Rather than holding the Establishment’s feet to the fire the film is an insidious example of propaganda by treating Britain’s miscreant behaviour as exceptional.

If this is what counts as ‘resistance’ in the film industry, then we need to look elsewhere for inspiration for the revolution.