Dreams in the Sky

‘Municipal Dreams: the Rise and Fall of Council Housing’, by John Boughton (Verso. £18.99) 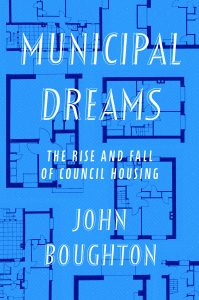 The first council homes in Britain were built in Liverpool in 1869 and the first council estate, in the Bethnal Green area of London, opened in 1900. But it was only after the First World War that council housing really expanded, with 1.1 million homes built in the inter-war period. These and other events are chronicled in Boughton’s informative and comprehensive history of council housing and the more general modern category of social housing. It is largely confined to England, but there are many discussions of individual areas and estates (from Wythenshawe to Park Hill) that mean it is more than just a general survey.

Reformers feared the filth and disease of poor housing, and often saw council housing as being for those displaced by slum clearance. But, like many others, the new Bethnal Green estate mainly housed the better-off working class (in the sense of manual workers) who had stable jobs, with those in insecure or badly-paid occupations left in privately-rented slums. Many people saw their new council homes as luxury compared to the dirty and overcrowded back-to-backs they had left behind. Even multi-storey blocks could provide decent homes with a sense of community, provided they were not built with the kind of cost-cutting measures that led to the disasters of Ronan Point and Grenfell.

The biggest number of council homes built in a year was 229,000 in 1953, under a Conservative government, but this was partly aided by a reduction in the size and quality of the homes. Labour government policy from 1977 required local councils to give priority to vulnerable groups (though this was absolutely not ‘a well-meaning socialist measure’, as Boughton claims). It led to the perception that council housing was for the most needy, a situation described as residualisation, an ugly term for an unpleasant concept.

There had been previous ‘Right to Buy’ schemes, but nothing on the scale resulting from the 1980 Housing Act, which gave discounts to long-term tenants; the income from sales could not be used to build new homes (just four hundred council homes were started in England and Wales in 1996–7, for instance). Owner-occupation was seen as a good thing, though the numbers are down since their peak in 2003. Most new council lettings now are for fixed terms of two to five years, so removing the long-term security previously offered. In 2016 1.8 million households in England were on waiting lists for local authority social housing.

Council estates in particular are often seen nowadays as a problem, and expressions such as ‘sink estates’ reinforce this view. But Boughton convincingly makes the point that social housing just reflects the wider problems of poverty and insecurity in society, rather than being a cause of these problems. His book is a bit optimistic about the positive results of council housing, but provides an excellent account of its history.