Wood for the Trees: The Cool

One of the longest surviving superlatives within the lexicon of youth is the word ‘cool’. Why is a word used by my generation in the 60s still respectable among the adolescents of the 2010s? Was it always just a superficial affectation or can it also represent something of aesthetic or even political value? Recently whilst considering a contemporary religious icon I conceded its beauty but criticised its meaning. A young woman said that I might be right but what was important about it was that it was so ‘cool’. Her aesthetic sensibilities had completely overwhelmed her critical facilities. Marketing has always relied on this formula and so has given us a world of superficial consumerism where appearance always seems to triumph over substance. Let’s visit the history of the ‘cool’ and see if it can be rescued from the clutches of the advertisers and their obedient youthful customers. 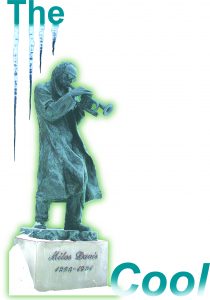 In 1957 Miles Davis conveniently, for our purposes, released an LP called Birth of the Cool. Black American counterculture was the birthplace of much of what we can describe as ‘youth culture’ and to a degree it still is. The music, the language and the fashion wear can all be understood as a counter to white ‘middle class’ culture. Listening to that album you hear an emotionally detached sophisticated urban sound with a restless under rhythm. A black perspective is commenting upon a strange and foreign culture as it passes through, never resting and always alienated. It is the counterpart of the blues of the South. All of this, of course, is a result of 300 years of slavery in the Caribbean and the Americas. Someone once said to me that we should forget all that and ‘move on’ believing that he could sing the blues because his woman had left him and his dog had died. Needless to say that particular white guy could never be considered as cool. Somehow the hundreds of years of cruelty and exploitation had given black people a pride and strength that, although it could not be directly articulated in their everyday working life within a racist culture, was expressed in their music.

White working-class culture also fed into this music with its folk traditions but the main players were all black males until Elvis. It can be debated whether Elvis Presley established a wider audience for black music or if he and his record company merely stole from it to make money – probably a mixture of both. But now rhythm & blues and rock & roll had a young white audience. Besides the rhythms they also adopted the cool that went with it culturally. This kind of ‘white cool’ is exemplified by Marlon Brando in the film The Wild Ones when while getting a drink at the bar the barmaid asks him: ‘What are you rebelling against?’ Brando answers: ‘What have you got?’ The white young male member of the working class was just as alienated as his black counterpart but not being politically conscious he rebelled against anything and everything that was considered to be part of the cultural establishment of his parents (aka a contempt for things ‘square’ – a term also from the jazz culture of the 40s and 50s referring originally to the rigid motions of a conductor following the conventional four beat rhythm). Not that the average black ‘cool dude’ was particularly political but it was impossible to be unaware of the racism that surrounded him and so this became the centre of his identity.

The cool is to be emotionally detached but with a deep contempt and anger; it is to have a power and confidence generated by the suffering of yourself, your community and those who went before; it is to be always self-aware; it is to live by your own rules and it is, perhaps above all, to be terrified by naivety and weakness. It is what feminists would call ‘a macho thing’. For all of us it is, of course, an impossible aspiration that cannot be defined. We may see it in ourselves and others occasionally but it is impossible to sustain in the face of a sick and corrupted world. It has, after all, been debased by marketing and advertising to a point where a religious icon can be considered cool! Religion and its myths and images are a lot of things but they are quite definitely not cool.

There was a time when the wearing of a cap with the Oakland Raiders legend on it would guarantee a conversation about American football or that when meeting someone with dreadlocks you could indulge in a long discussion about reggae music, but those days are over. These have all become mere fashion accessories which guarantee the wearer a level of ‘coolness’ that he or she has not earned. When Richard Dawkins used the reversed baseball cap as his first example of a cultural ‘meme’ in his best seller The Selfish Gene we should have known that we were in for an uncool future.