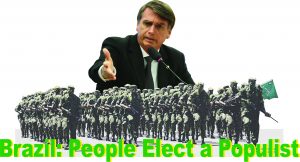 Far-right parties are mushrooming in popularity across the world elected on campaigns that disdain democracy and glorify authoritarianism. Bolsonaro attracted support from voters overlooking his fascistic tendencies. Recent surveys have found that 55 percent of Brazilians wouldn’t mind a non-democratic form of government if it ‘solved’ problems. Brazilians do have legitimate complaints about poor services. 83 percent of Brazilians believe that more than half of all politicians are corrupt, and they can’t be far wrong. More than half of Brazilian senators and one third of the members of Brazil’s lower chamber of Congress face criminal accusations.

The deep economic and social inequalities have made many Brazilians desperate enough that they are now willing to gamble on a maverick politician who is perceived as a man of action who will shake things up. Bolsonaro has proven wildly popular with some of the country’s most famous footballers: Ronaldinho, Rivaldo, Cafu, Kaka, Lucas Moura, all of whom have spoken in favour of him, even Neymar praised Bolsonaro. And while the endorsement of a few footballers may not have been the decisive factor in Bolsonaro’s victory, it nonetheless provided free publicity.

Bolsonaro, a far-right former army captain, openly defends Brazil’s 1964-1985 military dictatorship which saw at least 30,000 people killed, and has recently stated ‘If Congress grants permission, I would put armed forces in the streets.’ Bolsonaro proudly announced at a rally ‘We are going to gun down all these Workers Party supporters,’ using a tripod to mimic shooting a rifle. He has pledged to ‘purge’ Brazil of his left-wing foes.

Alfredo Saad-Filho, the leftwing professor, explained ‘Bolsonaro thrives on the notion that politicians are all corrupt, are all incompetent, and therefore the military is the solution. What is going to happen, likely, under a Bolsonaro administration is the dragging of the army into politics, into corrupt scandals, and its transformation into another gang’ (www.france24.com/en/20181024-jair-bolsonaro-brazil-election-democracy-military-dictatorship).

The man expected to head the culture ministry, Alessio Ribeiro Souto, is a former general and has said school history books should call the 1964-85 junta a movement to fight communism rather than a dictatorship. He wants creationism to be taught in schools.

The minister of transport may well be Oswaldo Ferreira, yet another retired general, who can be expected to authorise the building of roads through the Amazon forest, which will cause severe damage to indigenous communities and the country’s exceptional biodiversity.

Bolsonaro’s choice for finance minister is Paulo Guedes whose free-market economic agenda includes privatisation of almost all state-run companies, ending the protection of the Amazon rainforest and opening it up to commercial development and further cutting government spending on social services.

Bolsonaro has the backing of agri-business and mining companies, who are looking forward to the prospect of the Amazon rainforest losing its protection. He has promised to ease ‘excessive’ oversight by the country’s environmental watchdog and join up the Ministry of the Environment with the Ministry of Agriculture and Livestock. Business interests anticipate reductions in fines for those encroaching on the world’s biggest tropical forest, reducing its power to counteract global warming.

‘Everything is at risk,’ said Carlos Nobre, a climatologist at the Institute of Advanced Studies of the University of Sao Paulo.

‘We may face an unprecedented environmental disaster in the next four years,’ said Brazilian researcher Paulo Artaxo, a member of the Intergovernmental Panel on Climate Change (IPCC). ‘The main concern is the Amazon. According to Bolsonaro’s statements we can conclude that illegal settlements and deforestation will accelerate.’

Bolsonaro’s election victory could lead to indigenous people losing land rights. Bolsonaro said during his campaign that ‘not one centimetre of land will be demarcated for indigenous reserves or quilombolas [slave descendants]’, and that indigenous lands could be opened to economic exploitation, including agribusiness and mining. Bolsonaro called quilombola residents ‘lazy’ and said they were ‘not fit for procreation’.

Brazilian voters were desperate for change and have mirrored an anti-establishment trend that has swept around the world, where political ‘saviours’ have been voted into office. The distrust meant people believed in quick easy answers to their problems and the common tactic is to propagate nostalgia for an idealised past that these politicians miraculously promise to bring back. The strategy of these populists is to promote fear, anger, and hatred, scapegoating certain communities for the cause of all the ills afflicting society.

Enough voters fell for this, but right-wing politicians betray their election promises as much as left-wing ones, fortunately.