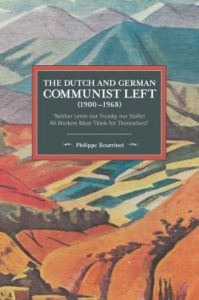 Bourrinet traces the origin of the subject of this detailed study – ‘council communism’ – to the breakaway in 1909 from the mainstream Dutch Social Democrat party (the Social Democratic Workers Party – SDAP) of a group critical of its open revisionism and parliamentary reformism, to set up the Social Democratic Party (SDP) as a more orthodox Marxist party. What they objected to was the SDAP’s exclusive reliance, to improve the lot of the working class within capitalism, on parliamentary action, including deals with bourgeois parties. The SDP envisaged the workers using strikes and other forms of mass action to further their interests as well as parliamentary activity that excluded deals with other parties.

Bourrinet concentrates on the views of two of their prominent members, the poet Herman Gorter and the astronomer Anton Pannekoek (though he was active in the German party at the time and up to the outbreak of the First World War). The SDP was not anti-parliamentary. As a Left Communist himself, Bourrinet sees Pannekoek’s advocacy of mass strike action to try to obtain a more democratic franchise in Prussia as ‘paradoxal’ but that’s with hindsight. At the time Pannekoek was not anti-elections. Nor was Gorter, who stood for Parliament in 1913 (and got 196 votes). In 1918, by which time the whole political situation had changed, the SDP got two MPs elected.

In November 1918 it changed its name to the Communist Party. Gorter and Pannekoek remained members but, having become by this time anti-parliamentarists, were not in the majority. They both eventually resigned to support the Communist Workers Party of Germany (KAPD) formed in 1920 by people expelled from the German Communist Party for, among other things, taking up an anti-election and anti-trade-union position.

This earned Gorter a place in Lenin’s 1921 polemic Leftwing Communism: An Infantile Disorder. Pannekoek had received a more favourable mention in Lenin’s 1917 State and Revolution for his view that the aim of the socialist revolution was to overthrow the state.

Pannekoek, however, did not share Lenin’s view that a new ‘workers’ state’ should be set up to replace the old state. Believing that the Russian revolution had really been the ‘soviet’ (i.e. council) revolution the Bolsheviks claimed it was, he advocated that, after the revolution, power should be in the hands of workers’ councils.

Bourrinet goes on to recount the rise of the KAPD, which at its height in 1921 had over 40,000 members, and its subsequent decline as it split into different groups over the roles of trade unions, workers councils and the party. Some were virtually anarcho-syndicalists. While the KAPD disappeared after 1933, the Dutch Communist Left survived as the Group of International Communists and after the Second World War as the Spartacusbond. But by then there weren’t any more of them than of us – fewer in fact.

Apart from their anti-parliamentarism, their post-war position was very close to ours, especially with regard to the need for the socialist revolution to involve majority democratic self-organisation. Their final position on Bolshevism can be seen from the titles of two of their books in English: Otto Rühle’s 1939 The Struggle Against Fascism Begins with the Struggle Against Bolshevism and Paul Mattick’s 1978 Anti-Bolshevik Communism. Some of them came to see Russia not only as state capitalist but the Bolshevik seizure of power in November 1917 as a state capitalist revolution.