Conspiracy-theory, or conspiracism, has it that much of the world today is to be understood in terms of ‘conspiracy’ be it by scientists, extra-terrestrials, masons, or whoever.

Currently gaining credence among many is the idea that all accepted science is a conspiracy, for relativity theory and quantum physics are specialised subjects. Einstein is difficult to understand and the majority of us are not astrophysicists, or other types of scientist, but that is no reason to dismiss these theories. 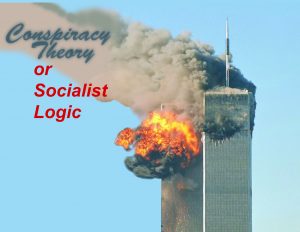 Many in society seek solace in pseudoscience, and therefore in conspiracism, whereby they can feel in control over what they cannot understand. Conspiracism absolves you from having to undertake painstaking research where you are not willing to trust those who actually have expertise in a difficult subject. Conspiracism attracts people from an entire spectrum, eager to feel that they belong to something: right or left in their leanings, dependent on what they were before becoming conspiracist. The phenomenon appears to attract ‘truthers’ – those who know the ‘truth’ despite the facts. Some are avowedly Christian, others not. Some dally with other rehashed mythologies, interpreted to fit in with their modern conspiracism. Many are, in fact, as members of the working class, confused and vulnerable, and want to feel significant; which they feel modern scientific thinking cannot help them with.

It is tempting to draw some similarity in all of this to the declining years of the Roman Empire, so brilliantly shown in the film Agora, about the last days of the great Library of Alexandria. Science and learning were then the property of a privileged few, and this is largely how they are seen today by many attracted to conspiracism and ‘truthism’. Today we are bombarded, flooded, with ideas and theories via the internet, whilst actual reading has declined.  Some conspiracy theorists tend to deride books which contradict them, dismissing them as the propaganda of those ‘in on’ the ‘great conspiracy.’ Book-learning becomes associated with closeted academia and so is deemed irrelevant. So refutation of a conspiracist’s ideology from facts outlined in books is futile.

With many people feeling disenfranchised from intellectual life, as they are in fact disenfranchised economically (being born in the wage-slave class), old and new-style forms of fanaticism win converts. Conspiracism is an obstacle to socialist awareness. Vital to the spread of socialist awareness is the materialist conception of history and recognition of human scientific progress.
Marx knew this when he wrote welcoming and applauding the publication of Darwin’s The Origin of Species, recognising science as the necessary ally of socialism. Above all, the scientific study of history is vital and paramount, as history is an evolutionary process.

Capitalism is not a conspiracy. It is a system that evolved through social and economic processes, just as socialism will have done. Capitalism, and class societies as a whole, do by definition encourage ‘conspiratorial’ behaviour, but they are historically, not ‘conspiratorially’, produced.
Everything grows from an antecedent and does not appear out of the blue.

Conspiracy theory backs up the bourgeois myth of an evil human nature (‘Original Sin’ rehashed for the modern age). To paraphrase Karl Marx, the morality of a given age is the morality of its ruling class. The cut-throat values of the capitalist class have us believing in a human cut-throat nature in which everyone is a potential conspirator, a potential thief, a potential brigand. Thus an ideology of brigandage, sustained by the viciously competitive nature of capitalism, leads people to see their fellow beings as either real or potential brigands.

Conspiracism reduces everything to a school playground view wherein everything is viewed as the
machinations of some cartoon-like gang independent of history. Those who attempt to spread conspiracy theory do a disservice to the cause of achieving a better world, by further confusing already confused workers and by giving ammunition to those who label socialists as cranks and claim capitalism to be the end of history.

We urge our fellow workers to face reality, embrace knowledge, and recognise for what it is the ridiculous zealotry known as conspiracy theory. Emancipation from the system of wage-slavery, poverty, prices and profits requires a grasp of social history and of social and natural realities.