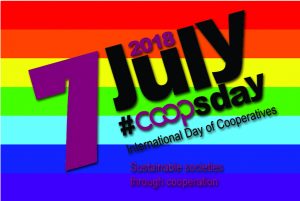 The International Cooperative Alliance was founded in London on 19 August 1895 by delegates from cooperatives in Argentina, Australia, Belgium, England, Denmark, France, Germany, Holland, India, Italy, Switzerland, Serbia, and the USA. Co-operatives Unleashed  is a recent report from the New Economics Foundation which calls for a co-operative development agency and a ‘John Lewis law’ compelling larger private companies to transfer a proportion of profits into a worker or a wider stakeholder-owned trust. In the report is a call for a ‘profound transformation in business ownership’. Under this proposal:

‘All shareholder or larger privately-owned businesses would transfer a small amount of profit each year in the form of equity into a worker or wider stakeholder-owned trust. Once there, these shares would not be available for further sale. ‘Partnership stakes carry with them democratic control rights over the management and direction of the business. In many respects, our proposal for an Inclusive Ownership Fund can be thought of as a John Lewis law.’

Our fellow-workers should, rather, face up to the reality that socialism is the only remedy for the poverty problem yet too many seek merely to ameliorate the misery of their lives under capitalism and one such palliative that continues to persist is cooperatives. Some have viewed the cooperative as an aim in itself, as a means of self-defence against management repression. Our job in the Socialist Party is not to tell fellow-workers the way to live, but to demonstrate that a genuine non-capitalist society is actually possible to achieve.

We do not see socialism coming about by ‘socialistic’ cooperatives gradually becoming more and more self-sufficient and eventually squeezing out the entire capitalist production-for-profit system. This argument goes right back to the origins of the workers’ movement in the first part of the 19th century. However, the our view is that political action for social change is the most effective way to achieve a co-operative commonwealth. We are not saying that people shouldn’t establish cooperatives if they want to, but that it’s not the way socialism is going to come.

We can imagine that, when socialists are in the millions rather than thousands and it is clear that socialism is imminent, people will be making plans and projects in anticipation of the coming of socialism, but we are not there yet. Cooperatives by themselves are insufficient to challenge the capitalist system.

So at the moment, we need to concentrate on spreading socialist ideas rather than promoting experiments in lifestyles.
While many cooperatives’ administrative structures are admirable, in the marketplace they become simply another kind of small enterprise operating in their own interests, competing with other enterprises and even with other cooperatives and which are obliged to conform to marketplace dictates, regardless of the intentions of their advocates and founders.

As long as capitalism exists, competition will always require the enterprises within it to look for lower costs, including the cost of labour. A cooperative must still buy its raw materials and other inputs and sell its products on the market, competing with every other producer of the same product, even if the members of cooperatives are nominally their own bosses. There cannot be socialism in one country, much less in a single business or a chain. Cooperatives cannot break the laws of capitalist production. The most important such law compels an enterprise, whoever owns or ‘controls’ it, to minimise costs in order to remain competitive. Society remains under the despotic direction of capital – even if it is the workers’ themselves rather than CEOs who serve as the new ‘personifications of capital’.

Although Marx mentioned workers’ cooperatives as possible harbingers of the new society, he cautioned that, as long as they exist within capitalism, the cooperatives ‘naturally reproduce in all cases…all the defects of the existing system, and must reproduce them…the opposition between capital and labour is abolished here…only in the form that the workers in association become their own capitalist.’ In other words, the workers end up exploiting themselves.

When Marx turns to socialist society, he envisions a sweeping revolutionary transformation of the relations of production, from the very start. Although cooperation of some sort is a necessary part of production, cooperatives by themselves are insufficient to challenge the capitalist system.