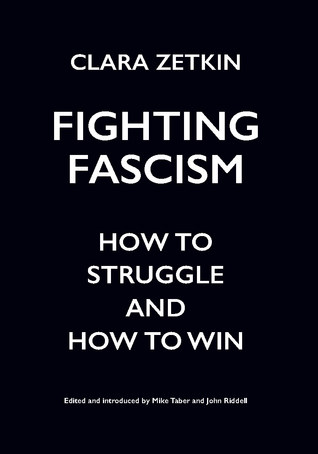 This booklet reproduces two main writings of Zetkin on fascism: her report and resolution presented at the Third Enlarged Plenum of the Communist International’s Executive Committee in June 1923, and her speech to the German Reichstag in 1932.

In order to appreciate the historical and political relevance of Zetkin’s analysis, the reader should consider that this came less than one year after the report (Rapporto sul Fascismo) presented by the then leader of the Communist Party of Italy (PCd’I) Amadeo Bordiga. His report at the Fourth Congress of the Communist International came a few days after Mussolini had come to power. The fascists’ Marcia su Roma had taken placed while the Italian delegates were away at that congress. This is not a negligible detail if we consider that eight days after Bordiga’s Report on Fascism the Central Committee of the Russian Communist Party sent a letter to the Italian delegation, signed by Lenin, Trotsky, Zinoviev, Radek and Bukharin to impose the fusion between the PCd’I and the Italian Socialist Party (PSI), from which the PCd’I had split only a little less than two years earlier. Bordiga was a tenacious opponent of the reunification imposed by the International in the name of the ‘united front’. This tactic and the interpretation and attitude toward fascism were very much interlinked. So in June 1923, while Bordiga was in jail, and the change of guard at the leadership of the Italian Party – its Bolshevisation – was coming about, an adjusted interpretation of fascism would strengthen and justify the new direction. This re-interpretation was in fact Zetkin’s report and resolution.

To be fair, Zetkin’s interpretation of fascism, and Italian fascism in particular, is in many respects truthful and in line with Bordiga’s report. However, her version is studded with assumptions and convictions that served the political plan of discrediting Bordiga’s ‘infantile’ position (e.g. of no compromises with social-democrats and Massimalists), and winning the new leadership under Antonio Gramsci over to the united front story. For Zetkin ‘Fascism arrives … as punishment because the proletariat has not carried and driven forward the revolution’ and that ‘Fascism [is] an expression of decay and disintegration of the capitalist economy… bourgeois state’s dissolution’. ‘The weaknesses of the Communist Party [of Italy] also played a role here… policy error in viewing fascism solely as a military phenomenon and overlooking its ideological and political side’.  According to Zetkin’s view, the violent struggle against fascism would allow the proletariat to ‘grow conscious, stronger, and more purposeful’. Thus, ‘To the masses! … but maintaining Communist Ideology… Meet violence with violence’.

Fascism did not arrive as a punishment because the workers and their leaders shied away from revolution. As already pointed out by Bordiga in his report, fascism was adopted by the industrial and agrarian bourgeoisie to violently physically repress the workers who occupied factories and fields in the turmoil following WWI. Looking a bit closer, one can see that fascism was in fact generated by the bourgeoisie itself. Money for Mussolini’s journal and the creation of his pseudo-anti-parliamentary-pro-worker patriotic movement (Fasci Italiani di Combattimento) came mainly from the Italian bourgeoisie.

Nor was fascism an expression of capitalist economic disintegration. Italy was thrown into the First World War completely unprepared, by a secret pact involving the king, Vittorio Emanuele III, the Minister of Foreign Affairs Sidney Sonnino and Prime Minister Antonio Salandra, representing the interest of industrial bourgeoisie hoping for easy spoils. By 1922 the country had already covered 79 billion lira of war costs without borrowing anything from other countries.

When reading Bordiga’s report it is also clear that the Italian Party did not see fascism as a mere military phenomenon.

1919 was in fact a bad year for fascism still stuck with patriotic demagogy. At the end of the war the liberals had some difficulty in keeping control over the army generals. This was evident when the poet Gabriele D’Annunzio, from whom Mussolini later stole completely his style and propaganda, managed to get several generals on his side to occupy the Italian-speaking city of Fiume (now Rijeka, Croatia), which according to the secret negotiations between Sonnino and the Entente was to go to Yugoslavia.

The old fox Giovanni Giolitti also thought he could use Mussolini’s fascists to get rid of the D’Annunzio movement, which was destabilising the army’s hierarchy, and to reduce the spread of working class organisations in particular in rural areas. He was looking for a political entity to go into coalition with. At the end of 1920, with government backing, the fascist ‘punitive expeditions’ started to terrorise the rural north of Italy. At the election of 1921 the fascists finally entered into parliament. They were not enough to serve Giolitti’s plans, who now had PSI and Popolari (Catholics) against him.

Thus, Mussolini’s fascists gained strength when the agrarian bourgeoisie, mainly of Emilia, Lombardy and Tuscany first, and the industrial bourgeoisie of big industrial cities such as Turin and Milan, saw in the fascists’ aversion towards working class organisations a viable anti-working-class weapon, even more effective than the Guardia Regia that up to then had violently repressed any insurrection. The advantage of using para-military fascist squadrons was that they could physically eliminate the leaders of the working class institutions, like the Mafia was doing in Sicily. The demobilisation of the army helped the fascists to recruit veterans who no longer fitted into society. Nevertheless, as we just mentioned, the fascist violence in the country as well as in the urban areas had always been tolerated if not facilitated by the police forces.

When Mussolini took power in 1922, against Giolitti’s calculations, the king did not enforce the state of siege ordered by the then Prime Minister, and permitted this. Hardly a coup d’etat when the Head of State gives his blessing.

Contrary to Zetkin’s, Zinoviev’s and other Third Internationalists’ expectations, Italy was not ready to conduct a successful working class revolution, ‘like in Russia’. This was acknowledged in Bordiga’s report. Instead of being an ‘expression of decay and disintegration of the capitalist economy’ fascism was an authoritarian adaptation of the political representation of capital’s interests.

The risk in adopting Zetkin’s view is to accept the false notion that fighting exclusively against fascism would automatically result in an emancipation of the working class. The danger today is that the ‘fight against fascism’ becomes a fight only against Trumpism, just because his bombastic ego may resemble Mussolini’s. Or that the victory against ISIS (a typical paramilitary ideological movement) is seen as a liberation of the working class in the Middle East from capitalism. The fight against fascism must not become a ‘moral question’. It is a class struggle question just as much as a fight against any other form of representation of capital’s interest is a class struggle question. 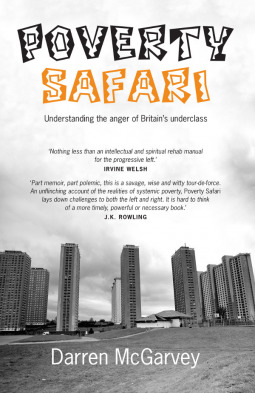 McGarvey was brought up in the Pollok area of Glasgow. His mother (who had been raped when young) drank heavily, was violent and ran up a massive drug debt, so he had a dysfunctional home life. One consequence was that he felt a deep sense of grievance against anyone he considered well-off and he blamed the ‘middle class’ (the capitalists don’t feature here at all).

A large part of his book attacks the ‘poverty industry’, where people make a good living from dealing with problems; not solving everything but leaving some sort of ‘legacy’, with enough problems still remaining for the industry to continue growing. Outside organisations that address poverty encourage dependency rather then self-sufficiency, and if you are poor it is best not to offend such organisations and those who work for them. In Scotland, ‘the poverty industry is dominated by a left-leaning, liberal, middle class’. In contrast, the poor, McGarvey says, need to become ‘more active, engaged and resilient’. Identity politics has supposedly replaced class issues, but again is just another means for the socially mobile (which often is equivalent in these pages to middle class) to dominate public discussion. But, considering how unclear his own views on class are, this is not very convincing.

It is odd that he emphasises the importance of taking personal responsibility and not just blaming others while at the same time writing eloquently on the lifelong consequences of childhood poverty and the crucial role played by emotional stress in influencing people’s health and social mobility. Many of those who end up in prison have experienced violence or other forms of abuse while children. Child abuse itself is driven by social deprivation.

As may have been gathered by now, McGarvey’s own views are not at all well explained. He sees Socialism in completely anodyne terms, as ‘about providing a decent quality of life for everyone in society’. He is now the father of a young son and as such is frightened by the thought of a revolution: but he does not say why, or what such a revolution would involve. Moreover, there is nothing at all here on what the underlying causes of poverty might be. So, if his book has an overall message, it is left very unclear.

‘Marx’s Theory of the Genesis of Money’. By Samezo Kuruma,  (translated and edited by Michael Schauerte. Brill, 2018)

A collection of essays which examines how, why and through what is a commodity ‘money’. It is based solely on the first two chapters of Marx’s Capital, Volume One. Kuruma (1893-1982) was a Japanese academic who specialised in Marxist economics. Schauerte, who provides a 20-page introduction, is a regular contributor to the Socialist Standard.

By beginning with the commodity and the theory of value, Marx was able to bring out what he called the ‘power of abstraction’. This simply means setting aside whatever elements are not relevant to the theoretical question at hand. As Schauerte points out, Kuruma’s interpretation is not original and is simply a close reading of what Marx actually wrote. An important reason for doing this is that Kuruma thought he needed to show that some of his colleagues had misunderstood Marx in important ways. This book is a specialist work and the general reader would perhaps be better directed towards Marx’s Capital itself or some of the widely-available introductions to it.