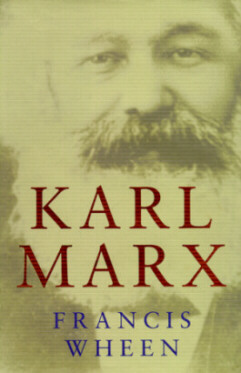 Journalist Wheen has performed a staggering feat. In just over 400 pages, he has traced the action-packed life of Karl Marx from childhood in Triers in the Moselle valley to university life in Bonn and Berlin and political exile in France, Belgium and finally London.

In the hands of Wheen the story is one of almost cinematic action. The heady student days of feverish philosophical debate fuelled by too much wine and beer are vividly portrayed. His foray into political journalism, his jousts with state censors and his eventual political banishment, leading to the life of a stateless person trekking through the capitals of Europe in poverty and constant harassment by state authorities and police spies are dealt with in a lively and readable fashion.

The real strength of this book, however, does not rest on the colourful biographical detail, but on its depiction of Marx as a human being, rather than (as has been too often the case in the past) as a god or a devil. Interestingly enough Wheen mentions in his introduction a book, written by an American evangelical preacher, entitled “Was Karl Marx a Satanist?” The other side of the coin, of course, are the books that are nothing less than hagiographies. As the jacket cover says, “Karl Marx emerges as a flamboyantly unmistakable individual, not the stony head of a monolithic, faceless organisation.”

Socialists might have wished for more emphasis on Marx’s ideas, but when Wheen does this he does an excellent job. Considering that his intention was to deal with Marx more as an individual rather than as an economist, historian, philosopher or revolutionary, the author’s discussion of the works of Marx is generally speaking difficult to quarrel with and easy to admire. He distances the writings and actions of Marx from his so-called supporters like Lenin, Stalin and Mao. He has a pop at Karl Popper’s criticism and absolutely devastates the attacks on Marx by the likes of Paul Samuelson. The role of Marx in the International Working Men’s Association is particularly well documented and his jousts with Michael Bakunin and the anarchists are vividly drawn.

A lot of people are going to hate this book. Left-wingers who see every industrial dispute or petty social unrest as the harbinger of a transformation of society will be reminded (if they ever knew) that Marx’s view was that a long period of education and organisation was necessary before the working class could establish socialism. Anarchists with their 19th-century romanticism about conspiracy and direct action will be less than pleased at the reporting of the antics of their anarchist heroes in the International. The academics who have dismissed Marx’s views as outdated are not going to like Wheen’s view that Marx’s criticisms of capitalism are still valid today.

Even if a lot of people are going to hate this book, this socialist loved it and advises readers to get down to their local library immediately. If you are going to buy only one book this year, then this is it.

‘Turbo-Capitalism: Winners and Losers in the Global Economy’, by Edward Luttwak, (Weidenfeld and Nicolson, 1998)

Most American textbooks on capitalism either present it as the best possible system that will last well into the future if not for ever, or admit that it has a few faults which are a small price to pay for its benefits. Luttwak is closer to the second position than the first. In his opening sentence he expresses his belief “both in the virtues of capitalism and in the need to impose some measure of control over its workings”. In a matter-of-fact tone the author discusses the many and dreadful consequences of capitalism for the losers, of which there are many more than winners. By turbo-capitalism he means a form of capitalism that is much different from the controlled form that mostly prevailed from 1945 to the 1980s. He admits that “turbo” is his term—others simply call it the free market. It means very much more than the freedom to buy and sell:

“What they celebrate, preach and demand is private enterprise liberated from government regulation, unchecked by effective trade unions, unfettered by sentimental concerns over the future of employees or communities, unrestrained by customs barriers or investment restrictions, and molested as little as possible by taxation.”

Luttwak likes the increase in economic growth that turbo-capitalism brings but is aware of the consequences which he deplores:

increasing job insecurity: “employees at all but the highest levels must go to work each day not knowing if they sill still have their job on the morrow”

the global increase in unemployment: “it is a protracted tragedy at the personal level, and destabilising at the social level”

the insecure majority are persuaded to accept the sovereignty of the market: “losers blame themselves rather than the system”

In mitigation of the harsh discipline and sharp inequalities which Luttwak admits turbo-capitalism has brought, he believes that there are “two great forces that serve to balance its over-powering strength”: the American legal system (poor people can get “damage awards”) and the pervasive influence of Calvinist values (earned wealth is no impediment to virtue).

In Luttwak’s favour is his assessment of Blair and the left wing in politics: ” . . . both Clinton in the United States and Blair in the United Kingdom have continued to use some liberal prose to wrap their conservative remedies . . . even a left-wing electoral victory can yield only right-wing polices”.

Compared to what he calls “defunct communist economies” and “bureaucratic socialism”, the author believes that turbo-capitalism is “materially altogether superior, and morally at least not inferior . . . Yet to accept its empire over every aspect of life, from art to sport in addition to all forms of business, cannot be the culminating achievement of human existence. Turbo-capitalism too, shall pass”.

Yes, Luttwak, but what are you doing to help make it pass?