We asked a reader in New Zealand to review our new pamphlet on the collapse of the state-capitalist regimes in Eastern Europe. 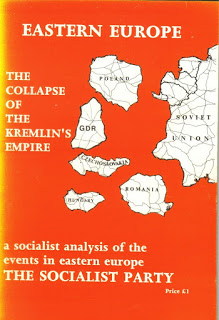 world history occur, as it were, twice. He forgot to add: the first time as tragedy, the second as farce”. The opening words of Marx’s The Eighteenth Brumaire of Louis Bonaparte could appropriately be applied to the abortive Soviet coup and its aftermath in relationship to the first coup d’etat by Lenin and the Bolsheviks.

History seems to repeat itself as Hegel and Marx observed but both knew that there’s no going back. The momentous events in the Soviet Union are the final death knell for the myth of “communism” or “socialism” in the eastern bloc—the twentieth century’s greatest lie— and for those who promoted and perpetuated that lie.

The facts are that socialism has never existed in the eastern bloc—what does or did exist is a system of bureaucratic state capitalism. It is this system which is undergoing an economic and social convulsion as it inevitably intermeshes itself with the world market.

There is a school of thought prevalent in the West which maintains that the bureaucratic class which has run the Soviet Union, China and the others has been “authoritarian”, “repressive” even “corrupt” and “dishonest” and yet has believed unreservedly in these bureaucratic claims to have created socialism. Needless to say, such an ideology has been actively encouraged because it has uniquely suited the political interests of the ruling élites in both the private capitalist west and the state capitalist east.

The state ideology of the state capitalist world, so-called “Marxism-Leninism”, is principally based on Lenin’s distortion of Marx, springing from the historically backward conditions Lenin and the Bolsheviks found themselves in at the collapse of Tsarist Russia. Ideologically Lenin’s break with Marx centres on Lenin’s contention that the socialist revolution could take place in a backward country and be led by a conspiratorial vanguard. It is clear from hindsight that this elitism was derived more from the French bourgeois revolution and the indigenous Russian Narodnik tradition than from the ideas of Marx or Engels.

Another less obvious but more insidious Leninist distortion of Marx was Lenin’s invention of a distinction between “socialism” and “communism” whereas Marx, Engels and the other 19th century Social Democrats used the terms synonymously along with “social democracy” to describe the classless, moneyless, post-capitalist world society. Lenin used “socialism” to describe the state economic monopoly of the Soviet regime (and the political monopoly of the Bolshevik Party), while “communism” as the ultimate classless moneyless society was relegated to an ever-receding future—as Soviet theoreticians continued to do almost up to the present day.

Inside the Soviet Union until his death in 1923 the doctrine of Leninism was courageously opposed by the Bolsheviks’ former Russian Social Democrat comrade Julius Martov from a rigorous classical Marxian position. In continental Europe this classical Marxian tradition was eventually overwhelmed by the new orthodoxy of “Marxism-Leninism” and by the great repression of fascism. But it has never been entirely extinguished and has persisted as an underground stream in Western thought, periodically surfacing in the writings of Martov, Rühle, Luxemburg, Pannekoek, Bordiga, Reich and Rubel.

In the vast English-speaking world this classical Marxian tradition has been kept alive by the Socialist Party of Great Britain and its like-thinking companion parties. In Australia and New Zealand classical Marxism was nurtured, not in the ivory towers and studies of the professional philosophers and intellectuals but rather in the ship’s forecastles and in the donkey-rooms of waterside workers.

The Socialist Party’s state capitalist critique of the Soviet Union and China has been at times extremely unpopular (even physically dangerous) but it has been consistently held virtually from 1918. Time has proven it to be correct.

The publication of a booklet analysing events in the Soviet Union and the collapse of the Eastern bloc is therefore appropriate and timely. Anyone wanting to work out what is going on in the former USSR, what is behind glasnost and perestroika, and to see the problems of the collapsing Soviet economy analysed from a Marxian standpoint should study this booklet.

The work’s academic value would be increased in my view with a reference section of source material and a list of authors at the back of the book. It would also have been useful to see a chapter devoted to the political differences and forces represented by Gorbachev and Yeltsin. And I would have liked to have seen a chapter on Julius Martov whose insistence that Russia would eventually have to go through a bourgeois-democratic revolution is finally being vindicated.

The last word then to Martov: “More than ever convinced that the genuine state power of the toilers must be founded on the principle of democracy, Martov moved a resolution which called for the reactivation of the Soviet constitution and its further democratisation, which he spelled out in some detail. When Sosnovsky interjected, ‘This, comrades. was last year’s declaration’. as if to suggest that Martov’s demands were already out of date, Martov replied, amidst general uproar: ‘Last year’s and for all time!’ (quoted in Martov by Israel Getzler, Melbourne. 1976)