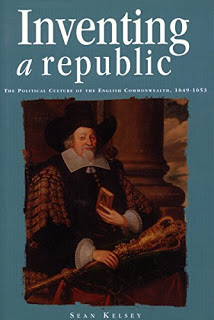 Inventing a Republic: The political culture of the English Commonwealth, 1649-1653.  by Sean Kelsey. (Manchester University Press, 1997)

The defenders of the status quo will always try and kid us that nothing much ever changes. Britain, it is said, has never undergone drastic change and has for example an unbroken history of monarchy. Yet the facts of history are otherwise. Over a century before the French revolution. England underwent a bloody civil war which ended with the execution of the king. This revolution removed bureaucratic impediments to the development of capitalism and from 1649 to 1660 England was a republic.

This book is a defence of the “Rump” parliament of 1649-1653 against charges that it was inefficient and corrupt. The Rump was dissolved by Oliver Cromwell, claims Kelsey, “largely in order to prevent the successful transition to an electorally mandated free state in which the commander-in-chief of the armed forces would remain little more than an important employee of the state, albeit the most important one.”

That may have been so. but there were other factors at work. At Putney, in 1647, Cromwell corrected the Levellers who demanded votes for soldiers, saying that they had not fought for that, but for the limitation of the royal prerogative, the right to parliamentary government and “freedom of trading to get money to get estates by”.

That being so, it would have made an interesting start to an investigation, but Kelsey does not pursue it. For a more balanced and realistic explanation of the causes and consequences of the English civil war readers are referred to the writings of Christopher Hill.