Book Review: Shame about the words 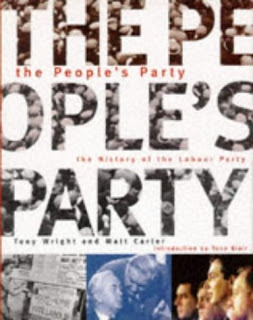 The People’s Party. The History of the Labour Party by Tony Wright and Matt Carter. (Thames and Hudson. 1997.)

This purports to be a history of the Labour Party. As responsible history it bears about as much resemblance to the Labour Party as the notorious official history of the CPSU published in Moscow in 1939 did to the Communist Party of Russia. In short it is a propaganda blurb and hardly to be treated seriously by anyone who wishes to understand what the Labour Party is all about. Some examples of inaccuracies and convenient omissions are that the Socialist League disaffiliated in 1937, when it disbanded under threat of expulsion: no mention is made of Foot’s attack on Peter Tatchell, Kinnock’s attack on the miners’ pickets, the expulsion of MPs Nellist and Fields: the disbanding (several times) of the youth section; the block on Liz Davies as candidate in Leeds. One could go on.

However, it may be interesting to note the various ways in which the authors, one a Labour MP, the other a tutor in politics at York University, and prospective MP (a job for which he is more suited, judging by his efforts here) have glossed over the past embarrassing anti-working class actions of previous Labour governments.These include their use of troops to break strikes, the introduction of conscription in peace time, the record of wage freezes by several of their governments, all that to a genuine socialist are shameful acts have been turned into virtues.

Claims for Labour as a socialist party are numerously sprinkled throughout the book. They even have the cheek to lay claim to William Morris, and then call him a “Utopian Socialist”. Nowhere is any attempt made to define what socialism is and a nationalist outlook is adopted throughout, with no conception that nationalism is of no interest to the working class and only operates for the benefit of the capitalists. When the word socialism is deployed it is used as meaning more government intervention in the running of capitalism and the lives of the people. Socialism of course means the end of government since there will be no minority class who need state power to maintain their dominance.

Throughout they casually mention reforms and socialism as though they were synonymous. When it comes to the famous Clause 4 on which the Labour Party staked its claim to stand for the interests of the working class, and which in practice has no other meaning than nationalisation, they are silent on the fact that nationalisation has proved to be an abject failure for the workers, especially the miners, and has been dropped by the Labour Party itself in favour of a hymn of praise to the capitalist market.

They scrupulously detail every piece of legislation ever carried out by Labour governments, from the Open University (possibly the best thing they have ever done, but was it designed for workers’ needs or for the needs of industry?) to Race Relations Acts and safety at work legislation.

Some of these are well-meaning reforms, but do the authors realise how the day-to- day operation of capitalism turns well meaning reforms into a nonsense? Employers will always find a way round legislation by introducing alternative working practices. Short contract labour as a way round pension schemes, or cheap illegal immigrant workers who are not covered by legislation are just two that spring to mind. Do they realise that mass unemployment which no capitalist government can prevent when there is a worldwide slump, favours the employer in reducing wage rates and worsening conditions of work? These things have been covered exhaustively in previous issues of this journal and do not need to be elaborated in a review, but suffice to say that such political naivety is bad enough in someone who teaches politics in a university, let alone someone who practices it at Westminster.

They follow the usual practice of capitalist political parties in crediting everything they deem to be “good”, such as full employment, to their own polices, and everything that goes against them to the unpredictable workings of fate. They treat the EU as being of significance when of course it has no relevance to us as workers who have no country, and which is only meaningful to the various sections of the capitalist class who decide whether they will make more or less profit from being in or out.

Prominence is also given to another factor which should be of no interest to the workers—leadership. They have a morbid concern with the never-ending power struggles for the leadership of their party. The authors would no doubt claim this to be fair enough as history but they seem oblivious to the fact that battles for leadership are themselves a refutation of Labour as a socialist party.

There are some lovely photographs, quite a few oddly enough depicting activities the Labour Party has always been anxious to distance itself from. Shame about the words.