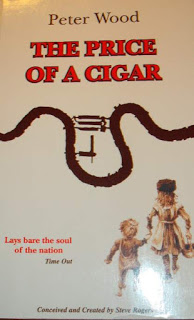 Books written from film scripts and from the texts of plays are comparatively rare, but here is one. Based on the play The Strike of 1889, which ran for 26 sell-out performances in 1994, The Price of a Cigar, tells the story of the London dockers’ strike of 1889.

I didn’t see the play but the book makes easy, often compelling. reading. The author claims that the events took place much as they are described and this seems credible.

The story traces the life of one docker and his family, describing in touching detail the squalid, crushing poverty of life in the East End of London. We follow the beginnings of the strike, and its subsequent development, through the actions of the strike committee, the rapacious behaviour of the London Dock Employers, and an American reporter employed by the Times. If the dialogue is sometimes less than convincing, with common language of the late twentieth century occasionally intruding into nineteenth century speech patterns, this seems not to matter very much. Wood tells the story with drive and gusto, and manages to capture something of the intoxicating spirit which drove the strikers on and which finally led the employers to climb down and accept the strike committee’s demands.

But it was a pyrrhic victory. Nothing really had been changed. Over a hundred years later, in 1994, the remnants of the once vast army of Liverpool dockers were sacked as they protested against the return of precisely the conditions which had led the London dockers to strike in 1889. Their union seemingly powerless to intervene— hamstrung by the anti-trade union legislation of the 1980s.

Writing about the book John Monks, the present chairman of the Trades Union Congress. describes it as “A moving and truly memorable account of ordinary lives that changed history.’’Moving and memorable”? Well yes. But “an account of ordinary lives that changed the course of history”? Not really. The capitalist class remains in power; workers continue to be exploited; the essential social relations which obtained before the 1889 strike remain in place.

Workers understandably fight to improve their conditions under capitalism, but the burden of their efforts, strategically, must be to change history by replacing capitalism, not by reforming it or concentrating on defensive struggles alone. Nothing less will do.

Author’s note:
As he has no wish to needlessly swell the coffers of W.H. Smith, Dillons, etc., the author intends to forward the profit from all books sold as a result of this review to the fund for the families of the Liverpool Dockers The price of the book is £9.95. Any reader requiring a copy should send two cheques, one for £5.55 payable to Anchor Books to cover the cost of the book plus packing and delivery, and one for £4.40 payable to the Merseyside Dockers Family Hardship Fund.

Post both cheques with order to: Anchor Books, Anchor House, 54 Whiteadder Way, London El4 9UR. Copies will be signed by the author if requested.