The publishers really took a risk when they agreed to publish this book. It has 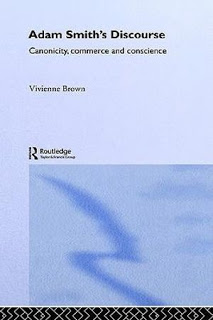 obviously been written by someone out to get a better academic job, for it is aimed at that specific section of the academic hierarchy obsessed with turgid post-modernist analysis, when it could have commanded a wider audience. Its main contention is that Adam Smith’s writings had a far greater moral imperative than is generally supposed, especially by the free market zealots who claim him as the forefather of laissez-faire economics. To the extent that this case is made it is lost in a welter of post-modernist verbiage of which the following is

“It was emphasised in the introduction to this chapter that the monologic style of WN does not mean that it can be viewed as a didactic text in the sense that excludes a rhetorical dimension. The theoretical structure presented in section 2 above constitutes the analytical frame that supports the large and leisurely discourse of WN. This discourse includes historical, comparative, empirical and conjectural material interspersed with juridical claims and a sustained criticism of the mercantile system.”

Any author who chooses to write in such a way does not, frankly, deserve to be read. In some ways this is a shame, because the more economically orientated sections of this book are not without interest, especially the chapter on Smith’s magnum opus, The Wealth of Nations. Even this partial commendation must be heavily qualified, however, as equally pertinent analysis of Smith’s political economy—especially his deployment of a labour theory of value later developed upon by Ricardo and Marx—have previously been made elsewhere and more intelligibly too. All in all, it is difficult to see what this book contributes to the sum of knowledge of humankind and specifically of the way society should be ordered. This is ironic, because these were clearly Smith’s own main intentions, horrendously wrong though he generally was.