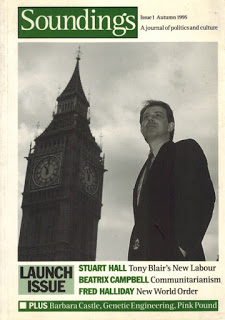 Soundings: A journal of politics and culture. Issue I. Autumn 1995, Lawrence & Wishart.
One can imagine the discussion in the editorial office of Lawrence and Wishart, the old Communist Party publishing house. “What we need is a brand new journal that will really put the old left-wing ideas back on the map.” says Jessica to Justin. “That’s right.” he enthuses, “a real journal of ideas—like Marxism Today used to be, only this time we won’t turn out so respectable that we become Tories and end up writing for the Sunday Times.” Jessica dribbles with delight. “So, we’ll get Stuart Hall to write a thirteen-page editorial about nothing in particular, which will show that we’re not Leninists like we used to be. but we’re still full of the old reformist tripe.’’ Stuart Hall’s editorial is undoubtedly a masterpiece in saying nothing eloquently, a must for all English as a Foreign Language students. “Then we’ll get Barbara Castle to write a twelve-page article on the lessons which the Blair government must learn. Of course, she’ll support Blair, but she’ll offer some penetrating warnings about moving too far to the right.” Yawn! “Then Beatrix Campbell, the leading theorist of femino-Leninist-Channel-Fourism, will write an eighteen-page critique of communitarianism.” They speak of little else in Hackney. “And that much-loved leftist interpreter of international affairs will write a twelve-page article on .. .” Pass the smelling salts; by now anyone with the slightest interest in original thought will be passing out. “Oh, and just to keep the kids happy, we’ll have this utterly incomprehensible eighteen-page whopper on “Music in Post-modern East End”— just to show the yoof and the sociology lecturers that we’re still in touch with the cutting edge of ideas.” And then—wait for it—they have the bloody nerve to charge £10.99 for the launch issue. They’ll be queuing up to buy this one at the local dole offices—we think not. What will be a safer bet Prescott for a future seat in the House of Lords or Soundings to go out of existence before the year 2000? If there’s any justice in the publishing world issue two of this dull, confused, confusing and pretentious journal should never see the light of day. It is sad proof that old CPers refuse to publish a short, dignified classified ad in the Guardian saying “We were wrong”, but insist on their right to continue inventing new and more long-winded ways of offering the world their wrong ideas. Like the rather more accessible, but almost equally boring magazine, Red Pepper, this reviewer’s advice is that rather than buy a copy you might as well give the money to a beggar in the street— you’ll certainly be doing as much to change the world.
Steve Coleman