Theatre Review: Mistaking Your Wife for a Hat 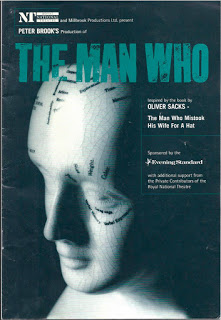 I remember my first “meeting” with Oliver Sacks. When you find your partner reading a book entitled The Man Who Mistook His Wife For A Hat, the moment tends to stick in the memory.
Sacks is a doctor who works with people suffering from neurological disorders. In The Man Who he wrote movingly about some of his patients: about, for example, a musician who could not recognise everyday objects: a man who remembered nothing of his life after the age of seventeen; a woman who had lost all sense of her own body; a man who imagined that his left leg was not his own; and. of course, of the man who thought his wife was a hat.
After a year of painstaking research—talking to experts, reading, watching tapes, and spending time with patients suffering from neurological illnesses, etc.—director Peter Brook, writer Helene Estienne, four actors and a musician, have miraculously transformed Sacks’s warmhearted and sensitive book into a compelling work of drama. Playing variously patients, doctors, nurses and technicians. Brook’s actors offer us a series of clearly differentiated snapshots of abnormal behaviour; the result of malfunctions deep inside the brain. Writing in the programme Brook observes that “whatever the social and national, barriers, we all have a brain and we think we know it. But the moment we go inside, we find we are on another planet”.
Brook says of Sacks that “his most essential clinical instrument is his own heart”, and certainly what illuminates a glorious piece of theatre is not so much the mysteries of neural dysfunctionality as a sense of shared humanity. We are in the presence of compassion and imaginative empathy, rather than peering voyeuristically through keyholes.
Theatre like this has the capacity to change the way we see both the world and ourselves. I shall long remember the penultimate scene in which a man who presumes—as we all do—that he is voicing words in what he imagines as a sensible discourse, turns on a tape recorder and hears himself speaking gibberish. The audience was engulfed in stirring compassion. How shocking then to leave the theatre and be presented with another reality: newspaper headlines screaming with Clinton’s demand that the Oklahoma bombers should be executed.
Dramas like The Man Who are deeply subversive. They offer in a class-riven world a view of other possibilities. Socialism won’t end neurological disorders but. by changing the climate in which we live—by replacing profit and exploitation with the satisfaction of human needs through co-operation—our efforts will be directed towards the well-being of humankind rather then the legal but brutal murder of other likely victims of a violent society.
Michael Gill