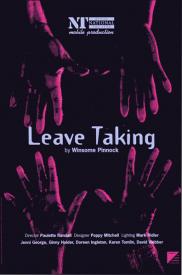 Leave Taking by Winsome Pinnock, National Theatre, Cottlesloe and touring.
Winsome Pinnock’s Leave Taking is sturdily unusual. Written by a black woman—the child of a West Indian immigrant—it tells the story of Enid, a single mother, and her two adolescent daughters. Delores and Viv, as Enid tries to deal with the death of her own mother in Jamaica, and her daughters try to discover their identities as adults. Its refreshing simplicity contrasts starkly with the spurious glitz and glitter, the condescension and the pretence, of much of the commercial theatre. It is faultless and touchingly played by a small company of black actors and actresses. It is a breath of fresh air.
Pinnock’s characters have a rounded credibility which makes them immediately acceptable. They are true to their own lights—persuasively recognisable as unique human beings—and yet it is easy to imagine that we might meet them in the street, on a bus. at work. Only the best dramatists are able to do this: to convince us of the genuineness of their characters and yet allow us to recognise in their experiences and their dilemmas, something of the common currency of all our lives.
Leave Taking is nominally about being a West Indian immigrant; about growing up in a predominantly white society. But it is also about being rootlessness, coping with life in contemporary Britain, and becoming an adult. In the experiences of half-a-dozen black people living in London we begin to see the impact of larger social forces on their lives and. by extension, on our lives too. Pinnock’s characters may be black but most of the challenges they face transcend their colour. They are also our challenges, and they are shaped by relative poverty and their need to find employment—in a word by their class.
Leave Taking is about particular individuals facing particular psychological challenges. But these challenges are rooted in a social context; one which, as members of the working class, we share. And as the lives of Enid, Delores and Viv unfold, we also learn something of our own lives, and of the class-based communalities which bind us together.
Michael Gill