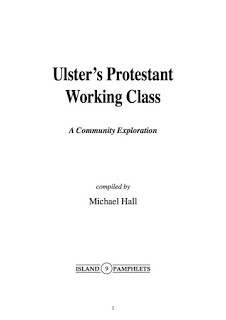 Co. Antrim  BT36 7JQ. £1.50.)
In an age when the realities of class politics are too often being cast aside for the so-called “politics of identity” (women’s politics, gay pride, community campaigns, black power, regionalism and the rest) it is satisfying to see that a discussion has been generated amongst some ’’protestant” workers in Belfast’s Greater Shankill area which recognises that, whatever they are, they are workers first.
The pamphlet reflects an ongoing discussion and not a clear-cut case, but we can detect within that discussion statements from which socialists can take heart:

“Republicans have long promoted the notion that the Protestant community was much better off than the Catholic community. This ‘half-myth’ retained its potency because Protestants even believed it themselves. The reality was that whatever privileges the Protestant working class was ‘granted’ were merely ‘crumbs from the table’ – it simply suited certain people to tell us that these ‘crumbs’ had to be held on to at all cost.”
“All a Unionist candidate had to do was appear at a street-corner, wave the Union Jack, shout ‘This we will maintain’, and he was as good as elected. Those days have to be brought to an end. It’s time we called our politicians to account for failing to address our real needs.”

It’s time that Northern Irish wage slaves dispensed with politicians, be they Unionist nationalists or Republican nationalists, and recognised that only the abolition of wage slavery, which is the real source of cramped and miserable lives, will remove the situation where workers can be persuaded to fight and kill one another over crumbs.
Steve Coleman