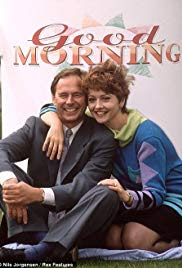 intimate tattoos and witchcraft. No, you won’t find any of them discussed in this column, but you certainly will find them if you watch This Morning with Richard and Judy long enough.

Certainly, morning television never used to be like this. In fact there never used to be much on TV in the mornings at all outside of the kids’ summer holidays when Heidi. Barnaby the Bear and England losing at cricket made their annual appearance on BBC 1. But some years ago ITV hit out with a concerted attempt to win ratings and advertisers with its morning magazine programme from the Albert Dock in Liverpool. With its quirky mixture of high fashion, sex and astrology This Morning soon gained a cult following, particularly among Britain’s students, thus demonstrating like nothing else the current poverty of student life.

Two years ago BBC 1 attempted to regain the initiative with the imaginatively titled Good Morning With Anne and Nick, hosted by the prim Tory Anne Diamond and professional bloke Nick Owen. At first it floundered badly but it has now overtaken its rival in the ratings, provoking what some at the BBC have claimed is a “dirty tricks” campaign from Granada.

The BBC version of what is basically the same programme with different presenters is more homely than its ITV rival, though it suffers from many of the same difficulties. Foremost among these is something which becomes apparent within minutes of turning the set on. Both morning magazine programmes are lowest common denominator television. They are the tabloids of the small screen. Both have their main stories, big-name interviews, guest columnists (doctors, cooks, etc.), pop stars and astrological features. True, they may not have topless models posing for their audience, but when voyeuristic TV comes via features on breast implants or leggy models parading the latest high street fashion in stockings and suspenders, the comparison with the tabloids is all too clear.

The Joan Collins Fan Club
Like all the successful tabloids, This Morning and Good Morning demonstrate a preoccupation with the good life and high society. The BBC 1 version sends professional glamourpuss Tania Bryer to all the top parties and events so that she can report back to the millions not so fortunate, in a sort of Daily Mail meets Hello! magazine feature for TV. Richard Madeley and Judy Finnegan’s programme is even worse on this score. This Morning demonstrates a preoccupation with high fashion which is thoroughly out of keeping with the type of audience it attracts. No doubt there are a few Kensington millionairesses who tune in, but the staple audience for morning TV consists of housewives and househusbands, the unemployed, pensioners and students. Just how many of them are likely to be able to afford the glamorous Versace outfits paraded in front of them with such frequency? A feature on wedding dresses is liable to show little costing less than several thousand pounds, as if this is the norm for a cash-strapped working class. The message appears to be that “you too can aspire to this”, but the class system means that those watching are going to do plenty of aspiring with scant reward for their efforts.

Ian McCaskill
While it is not normally easy for the humble reviewer to develop a class analysis of the weather forecasts, morning television provides the opportunity. This is because Good Morning With Anne and Nick has a novel approach to weather forecasting. It does them for one person. That’s right — just the one, or sometimes a couple if it is feeling charitable. Invariably it is for Quentin or Arabella from London Docklands or something similar who want to know what the weather is going to be like for their midwinter month-long holiday in Mustique. Sod Rockall, Shannon and Dogger Bank, its the Seychelles Good Morning is interested in. How else to warm the cockles of a pensioner’s heart? Whatever, it’s nice to know they’re thinking of us all.

But to be sure, the crisis-beset proles are not forgotten entirely. They are the fodder for the phone-ins. on embarrassing topics sandwiched between the pap. “From Ainslie in the kitchen with his seafood platter to our phone-in on crabs in the bedroom. VD clinics all over Britain have been reporting difficulties . . .” This is the sort of link Anne and Nick are good at when such a time comes, and that is fairly often. The phone-ins themselves are designed so that desperate people can tell the world about their problems and then receive a few words of advice from an agony aunt, doctor, psychiatrist or whoever else is available. They are excruciating. Not only that, but there is something worrying about programmes that devote so much of their time to such exploitation of others’ misfortunes. If anyone actually puts the phone down with a problem solved it is very rare and, moreover, besides the point. The object is to get all the gory and embarrassing details out on air before the adverts come on or before it is time for the next fashion report.

If you haven’t already guessed from all this, morning TV is to be generally avoided, and it is indeed possible that many only have it on because it provides welcoming background noise at a dull time of the day. It is at best twee, invariably voyeuristic and at worst moronic. So if by any chance you’re asking whether this morning is a good morning in the home of your TV reviewer, then the likely answer is no. it bloody well isn’t.