Abolition of the Wages . . . for Housework Campaign 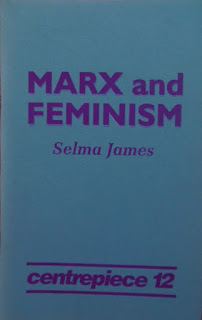 Marx and Feminism. By Selma James. Centrepiece. £1.50.
Marx, according to Selma James in this reprint with an update of a talk originally given in 1983, has been useful to the Wages for Housework Campaign. It is difficult to see how though, since Marx campaigned for the abolition not the extension of the wages system.
Actually, what the Wages for Housework Campaign is demanding is not that women should be paid a wage for housework, but that all women should be paid a specific Woman’s Benefit by the State. Turning into a single issue reformist group may not have been how James (who had previously been in various radical groups that regarded themselves as Marxist) saw the Campaign developing when she helped set it up in 1972. But this is what has happened, with her and the others rushing around lobbying the UN and governments to bring in this reform.
Not that it will ever be enacted. The State is not going to pay out money to people who, by its criteria, don’t need it even if it did have the enormous sum that would be involved, which it doesn’t and couldn’t get without over-taxing profits. Capitalism doesn’t work like that. It can’t be reformed so as to work in people’s interests. Profits always come first and people second.
This being so, the energies of those who are, quite rightly, concerned about the economic dependence of women on men would be much better directed to campaigning for Socialism, where the principle of “from each according to their abilities, to each according to their needs” will apply. This will end once and for all women’s economic dependence on men since everyone would have free access, as a matter of individual right and without needing to pay money, to what they required to satisfy their needs.
As Marx might have put it, instead of raising the conservative slogan “Wages for Housework” they should raise the revolutionary one of “Abolition of the Wages Systen”.
Adam Buick